Are There Half a Million Years in the Sediments of Lake Van?

by Michael J. Oard on May 9, 2007
Featured in Answers in Depth
PDF Download
Share:
Email Using:
Gmail Yahoo! Outlook Other

On March 15, the Science Daily website reported that there may be half a million years of precise climate information stored in the sediments of Lake Van in eastern Turkey.

On March 15, the Science Daily website1 reported that there may be half a million years of precise climate information stored in the sediments of Lake Van in eastern Turkey. This information is in the form of what are believed to be “varves,” defined as a sedimentary sequence laid down in water in one year. So, by counting “varves,” researchers believe they can determine the time, like counting the rings in a tree to determine its age.

Lake Van is by volume the fourth largest closed body of water on earth with a volume of 607 km3, an area of 3,570 km2, a maximum depth of 450 meters, and a lake level at 1,648 meters above sea level.2 It is the largest soda lake in the world and has a pH of about 9.8. The thickness of the sediments on the bottom of Lake Van is up to 400 meters thick.

Although the article reported that 2.5 centimeters of lime is laid down each summer, this probably is not correct from a uniformitarian viewpoint. Consulting previous reports on cores that go down at most only 10 meters, uniformitarian scientists believe the annual sedimentation rate is about 0.5 millimeter/year.3 Researchers believe that there are at least 800,000 years stored within the 400 meters of sediment, which averages out to 0.5 millimeters/year of sediment accumulation. The reason for this fifty-fold difference in sedimentation rate is not due to sediment compaction and likely is not caused by measurements in shallow water, but probably is due to an error in the Science Daily article.

Scientists determined this sedimentation rate by collecting piston cores up to 10 meters long from the bottom of the lake. Although they date their showcase core at 14,570 years before the present at a core depth of 8.8 meters,3 they believe each 10 meters of sediment below the surface layer represents 20,000 years. The difference between the surface layer and the deeper sediments is caused by greater water in the upper 10 meters of the core, which must be subtracted. The maximum depth of sediments (400 meters) probably was determined by seismic profiling. Using a large floating platform, scientists are planning to drill in about 400 meters of water and collect cores down to a sediment depth of 250 meters. This would correspond to half a million years, based on their assumed sedimentation rate.

Is there really this much time stored in the sediments at the bottom of Lake Van? Like many aspects of the earth sciences, it depends upon your paradigm. To the evolutionary/uniformitarian scientists,4 such time estimates are believable and assumed to be based on present processes.

Many “Varve” Challenges to the Creationist Timescale

Lake Van is not an isolated example in which sediments are dated by varves to tens to hundreds of thousands of years old. In previously glaciated areas of the Northern Hemisphere, varves are counted to about 10,000 years, believed to be the end of the last ice age in the uniformitarian scheme. The famous Swedish timescale was the first varve sequence applied to the end of the Ice Age and for post-Ice Age time. It has had a checkered history but can be reinterpreted within a creationist short timescale.5, 6 A well-researched example is Elk Lake, Minnesota.7, 8, 9, 10 Scientists are also applying the varve-counting technique to marine basins, such as the Santa Barbara Basin off Southern California that has been cored to shallow sediment depths11, 12, 13 with one long core to 196.5 meters.14 Scientist believe that 2 kilometers of horizontal sediment in the Santa Barbara basin are generally varved and up to about 2 million years old.

Geologists have also claimed that there are many millions of years of varves in the sedimentary rock record. Two well-known examples are the 260,000 varves claimed for the Permian Castile Formation of west Texas and southeast New Mexico15 and over six million varves in the Eocene Green River Formation in northeast Utah, southwest Wyoming, and northwest Colorado. 16 So-called varves are also used as evidence of ancient ice ages up to 2.5 billion years old and lasting tens to hundreds of millions of years.17 So, the varves of Lake Van represents just one of many challenges in the area of finely laminated sediments or sedimentary rock.

Creationist Response to the Varve Challenge

Of course, creationists interpret the raw data in a different way. Whereas the uniformitarians will interpret the data on varves within their millions-of-years timescale, creationists believe these sequences represent a short timescale. It is like the interpretation of the Grand Canyon. Uniformitarian scientists believe the Colorado River eroded the Grand Canyon over several millions of years (a hypothesis with many difficulties18) while creationists see a lot of water over a short time.

Specifically, the concept of a one-year timescale for all these varves is open for challenge. Many uniformitarian scientists have concluded during the past thirty years that multiple varve-like sequences can be deposited within one year. The sequences should properly be called “rhythmites,” which does not imply a mechanism or a timescale for their formation. A rhythmite is a repeating sequence of two or more lamina, which are thin layers.

Some of these mechanisms for the rapid deposition of rhythmites include flowing sediment with different particle sizes, shapes, and densities;19, 20, 21 flooding into lakes; underwater slides; turbidity currents; snow-melt events; underflows from a muddy bottom layer; overflows from a muddy layer floating at the top of a lake; interflows from a muddy layer at intermediate depths; and multiple rapid blooms of microorganisms within one year.22 For example, 300 to 360 laminae formed in 160 years in Lake Walensee, Switzerland.23 The number and thickness of laminae varied with the location, which would make correlation by couplet thickness difficult. Generally, two couplets a year had formed, but at some locations five couplets were deposited in one year. The extra couplets were formed by bottom currents, caused by either melting snow or heavy rainstorms. 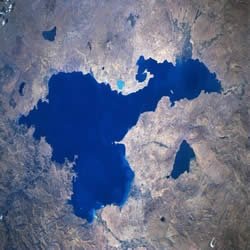 Wood described three varve-like couplets deposited in a new reservoir.24 The couplets looked very much like varves and were formed by three peak river inflows caused by light showers.

Pickrill and Irwin analyzed rhythmic sediments from a deep glacial-fed lake in New Zealand and discovered an average of three couplets per year.25 They discovered that winter couplets form by the slumping of river delta deposits. A delta may become over-steepened due to summer sedimentation and slump during winter.

Multiple turbidites, the deposits of fast-moving bottom flows of sediment, can form thick sequences of varve-like rhythmites quickly. Quigley stated that many presumed varves are actually turbidites and that researchers in the past have simply assumed that a laminated sequence is a series of annual varves:

It is very unfortunate from a sedimentological viewpoint that engineers describe any rhythmically laminated fine-grained sediment as “varved.” There is increasing recognition that many sequences previously described as varves are multiple turbidite sequences of graded silt to clay units ... without any obvious seasonal control on sedimentation.26

So, depending upon the context, more than one rhythmite can be laid down in one year.

A good analog for the Ice Age deposition of rhythmites in Sweden and North America is provided by the melting glaciers in Muir Inlet.27, 28 The sedimentation rate in the inlet varies from 13 m/yr at the main glacial terminus to about 1 m/yr at ice-distal locations. Most of this sediment is finely laminated silt and mud, and many couplets are deposited each year. One rhythmite per day has been recorded in some locations based on the strongest diurnal tidal changes.29

Rhythmites deposited in lakes filled after the melting of ice sheets, such as Elk Lake, can be explained by a rapid deposition during catastrophic deglaciation,30, 31, 32 tapering down to the present annual rate. This same method was applied to the claimed 110,000 annual layers counted in one Greenland Ice Sheet ice core.33

By one or more of the above-listed mechanisms for rapid deposition of rhythmites, flood deposition can explain the hundreds of thousands to millions of rhythmites in the rock record. During the Flood it is likely that thousands of rhythmites could have been deposited in one day. Hence, the Flood can explain the Green River Formation, Castile Formation, and other examples in the rock record. Strong evidence that the Green River Formation rhythmites are not varves is shown by a study from Fossil Basin by Buchheim and Biaggi.34 From more than 34 locations, they found 35% more thin layers between two volcanic ash beds from the basin center to the basin margin.

Non-glaciated lakes, such as Lake Van, and marine basins are more challenging because the rhythmites are not normally repeating laminae of fine-grained particles and coarser-grained particles, such as clay and silt. Such sedimentation is often organic chemicals or microorganisms mixed with inorganic chemicals. Scientists are often at a disadvantage when analyzing these rhythmites because of a lack of information, the complexity of the sediments, the stretched-out timescale by various uniformitarian dating methods, etc.

The sediments in Lake Van can potentially be explained by the above combination, but we will have to wait until the deep coring is finished. In Lake Van, the top 10 meters of mostly rhythmites consist of light colored carbonate laminae and darker organic and fine-grained, inorganic particles. Little has been published on the details of these varves and of possible mechanisms for the formation of more than one couplet per year. To complicate matters, the rhythmites possess assumed small gaps, turbidites, ash layers, and less distinct intervals of rhythmites in the top 10 meters. The shallow cores were dated by presumed end glacial events, but the match was off a little with other records (all these climate records are intercorrelated and matched to the astronomical hypothesis of repeating ice ages). The sediments deeper than 10 meters have not yet been sampled, so it should be interesting in a few years to obtain the results of the deep coring.

Little specific can be said about the Lake Van rhythmites at this moment. However, I would suggest that most of the sequence of 400 meters of sediments represent end-Flood settling of debris, greater sedimentation during the Ice Age, and a tapering off of the sedimentation rate, much of it by the formation of rhythmites, to the slow rate of today.

Uniformitarian geologists assume the slow rate of deposition as observed today for the past. However, in many cases they really have not observed the present sedimentation rate, and in some cases where they have used sediment traps, not all the deposition has been recorded. Creationists, on the other hand, can postulate much higher rates in the past due either to the Flood and/or a rapid post-Flood Ice Age—the rate tapering off upward to the present slow rate.