The Stone Mountain granite samples in this study yielded no zircon crystals and no diffuse radiation stains. These data are insufficient to determine the timing and mode of formation of these radiohal

The Stone Mountain granite, Georgia, (USA) is shown to contain radiohalos of the single-ring type, probably 210Po. Xenoliths collected from the same site are devoid of radiohalos, but do contain crystalline inclusions (probably zircons) that are bordered by diffuse radiation stains. The granite samples in this study yielded no zircon crystals and no diffuse radiation stains. These data are insufficient to determine the timing and mode of formation of these radiohalos in the Stone Mountain granitic pluton, so further studies are warranted.

Palm-sized granite and xenolith samples were collected on the south-west side of Stone Mountain, GA, adjacent to Howell Lake, at the 1,200 foot level above the main wildlife trail, on 20 May 2000 (Figures 1, 2, 3). Biotite schlieren were not collected.1 Samples were gently washed in distilled water to remove extraneous dirt and debris, although microscopic pine and other pollen grains remained (see arrows, Figures 4,5). Water was shaken from the samples and then they were allowed to air dry. 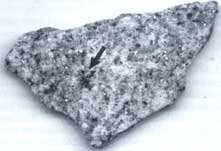 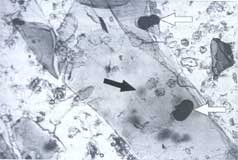 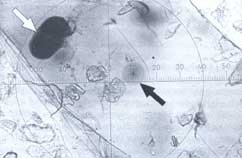 Xenolith samples contained no identifiable, circular radiohalos with concentric rings. Radiation stains were observed in xenoliths, but only always associated with microscopic crystal inclusions (probably zircons) (Figure 6). These inclusions were found within the cleavage planes of the crystal structure of the biotites. Radiation stains around these large inclusions were never circular, and never demonstrated concentric rings, but mostly diffusely followed the peripheral contours of the zircons, probably because of the large sizes of the inclusions.

On the other hand, 42% of the biotite flakes from the granite samples yielded single-ring radiohalos (Figures 4, 5, 7). Radiohalos never had more than one ring. Ring diameters of 19.2 µm (micrometers) were measured which correspond to diameters reported for 210Po radiohalos in biotites.3 Furthermore, the identity of the radiocenters within these 210Po halos could not be determined due to them being so tiny as to be virtually impossible to see.

In some instances very dark and concentrated, essentially circular in cross-section, radiation stains were observed (Figure 8), but no zircons or other crystals surrounded by diffuse stains such as observed in the xenoliths were found.

The radiation stains surrounding zircon inclusions in xenolith biotites are certainly the result of alpha-particle emissions from the zircons (and thus are from alpha-particle– producing daughters in the 238U and/or 232Th decay series), but they are not well-defined halos with concentric rings. The diffuse, oblong patterns of the stains are probably because of the large sizes and oblong shapes of the zircons.

The xenoliths studied represent pieces of country rock which were incorporated into the Stone Mountain granite during its formation.6 They are composed of biotite-plagioclase gneiss. The metamorphic processes that produced the gneiss would have been responsible for the formation of the biotites, but the zircon inclusions within the biotites would have to have been already present in the protolith (parent sedimentary rock) due to the refractory nature of zircon. The metamorphic processes were, by definition, hot processes that would have annealed any radiohalos or radiation stains which may have been present within the protolith.7 Even after the metamorphism reached its peak, waning temperatures would have still been sufficiently high for some time to immediately anneal any damage to the biotites by alpha-emissions from the included zircons. 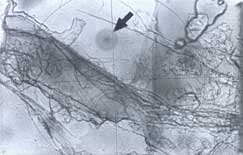 Thus, the development of these diffuse radiohalos in the xenoliths must post-date the metamorphic processes. Hydrothermal fluids containing radioactive elements could have flowed through the biotite cleavage planes associated with zircons during the cooling of the granite after these xenoliths had been included in it, and thus could have supplied the zircons with the U and/or Th responsible for the diffuse stains. However, this scenario can also be excluded because radiation damage is not spread along the cleavage planes of the biotite in areas which contain zircons. Instead, these stains are restricted to areas surrounding the outer edges of zircons. Thus these diffuse radiation stains around the zircon crystals in these Stone Mountain xenoliths are probably due to decay, after granite cooling, of U and/or Th in the zircons that was included in the zircon crystals when they originally formed.

It is possible that the reason only diffuse radiohalos have been found in the Stone Mountain xenoliths to date is that only oblong zircons occur in the xenoliths studied, or perhaps because small zircons or other inclusions, around which well-defined halos would have formed, have not yet been found. It is also possible that not enough samples have yet been studied, and that well-defined halos may yet be found to exist in these xenoliths.

The single-ring radiohalos found in the Stone Mountain granite appear to be identical to those that form by the alpha-decay of 210Po. Ion-microprobe mass spectrometry analyses of the radiocenters could potentially confirm that 210Po is the parent radioactive isotope responsible for these halos, assuming radiocenters large enough to be analysed can be found and identified. It is hoped that this technique can be employed in a future study.

Previous published creationist studies1,6 have concluded that the Stone Mountain granite pluton formed rapidly as a result of remelting of primordial granite and mixing with melted country rocks during the late Flood Alleghanian orogenic event. Mineralogical, geochemical and field data,8,5 such as flow-banding, support a molten origin for the Stone Mountain granite pluton. Furthermore, the observed 210Po radiohalos in the granite and the diffuse radiation stains in the xenoliths do not seem to support a primordial origin for the granite, so further work is required to determine if the single ring halos found in this granite (probably 210Po) are parentless or secondary halos. This would include annealing experiments to help characterize the conditions under which these radiohalos in the Stone Mountain granite formed.

The author thanks Carl Froede for access to Stone Mountain and for samples. In addition, the author is grateful to the reviewers and to Dr Andrew Snelling for critical comments.