Is this dating failure from Mount St Helens an isolated case of radioisotope dating giving wrong results for rocks of known age? Certainly not! Dalrymple,1 one of the big names in radioactive dating [and a self-confessed intermediate between an atheist and agnostic], lists a number of cases of wrong potassium-argon ages for historic lava flows (Table A). There are many other examples of obviously wrong dates. Only recently, Creation magazine reported that ages up to 3.5 million years were obtained for lava flows that erupted in New Zealand from 1949 to 1975.2 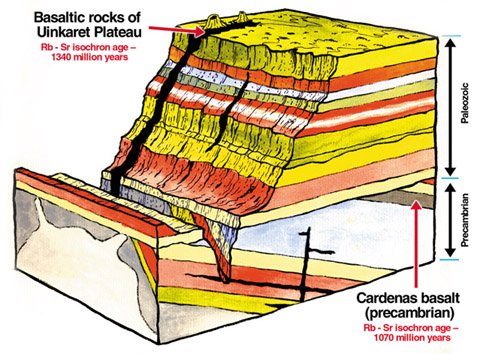 One sobering example comes from the Grand Canyon in Arizona (see diagram, left). The Cardenas Basalt in the bottom of the canyon is an igneous rock layer suitable for radioisotope technology. When dated by the rubidium-strontium isochron method, the Cardenas Basalt yielded an age of 1.07 billion years. Most geologists consider this a ‘good’ date because it agrees with their evolutionary chronology.3 However, we know the date can’t be right, because it conflicts with Biblical chronology.

It is a different story when the same rubidium-strontium method is used to date lava from volcanoes on the north rim of the Grand Canyon. We know these volcanoes are some of the youngest rocks in the canyon, because they spilled lava into the canyon after it had been eroded. Geologists generally think that these volcanoes erupted ‘only’ a million years or so ago. The measured age? 1.34 billion years.3 If we were to believe the dating method, the top of the canyon would be older than the bottom! Of course, geologists don’t believe the result in this case, because it does not agree with what they believe to be the right age. We don’t agree with the result either. Such an obviously conflicting age speaks eloquently of the great problems inherent in radioisotope dating. It also speaks volumes about the way ‘dates’ are accepted or rejected by the geological community.