Standing roughly in the centre of New Zealand’s North Island, Mt Ngauruhoe is New Zealand’s newest volcano and one of the most active (Figures 1 and 2). It is not as well publicized as its larger close neighbour MT Ruapehu, which has erupted briefly several times in the last five years.

Mt Ngauruhoe is thought to have been active for at least 2,500 years, with more than 70 eruptive periods since 1839, when European settlers first recorded a steam eruption.2 Of course, before that, the Maoris witnessed many eruptions from the mountain. The first lava eruption seen by Europeans occurred in 1870.3 Then there were ash eruptions every few years until a major explosive eruption in April–May 1948, followed by lava flowing down the northwestern slopes in February 1949.4,5 The estimated lava volume was about 575,000 cubic metres (20 million cubic feet).

The eruption lasting from 13 May 1954 to 10 March 1955 began with an explosive ejection of ash and blocks.6,7 Then almost 8 million cubic metres (280 million cubic feet) of lava flowed from the crater in a series of 17 distinct flows on the following 1954 dates:

These flows are still distinguishable today on the northwestern and western slopes of Ngauruhoe (Figure 4). The 18 August flow was more than 18 m (55 feet) thick and still warm almost a year after congealing. Explosions of ash completed this long eruptive period.

Afterwards, Ngauruhoe steamed almost continuously, with many small ash eruptions8 (Figure 5). Cannon-like, highly explosive eruptions in January and March 1974 threw out large quantities of ash as a column into the atmosphere, and as avalanches flowing down the cone’s sides. Blocks weighing up to 1,000 tonnes were hurled 100 m (330 feet). However, the most violent explosions occurred on 19 February 1975, accompanied by what eye-witnesses described as atmospheric shock waves.9 Blocks up to 30 m (100 ft) across were catapulted up to 3 km (almost 2 miles). The eruption plume was 11–13 km (7–8 miles) high.

Figure 4. View from the Mangateopopo Valley at the base of Mt Ngauruhoe, showing the darker-coloured recent lava flows on its northwestern slopes.

If any of these assumptions are violated, then the technique fails and any “dates” are false.

The potassium-argon (K–Ar) dating method is often used to date volcanic rocks (and by extension, nearby fossils). In using this method, it is assumed that there was no daughter radiogenic argon (40Ar*) in rocks when they formed.13 For volcanic rocks which cool from molten lavas, this would seem to be a reasonable assumption. Because argon is a gas, it should escape to the atmosphere due to the intense heat of the lavas. Of course, no geologist was present to test this assumption by observing ancient lavas when they cooled, but we can study modern lava flows. 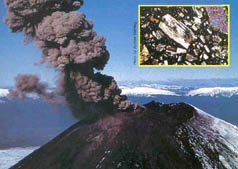 Figure 6. Inset: Andesite of the June 30, 1954 flow, Mt Ngauruhoe, seen at 60 times magnification under a geological microscope. Different minerals have different colours. All are embedded in a fine-grained matrix.

Eleven samples were collected from five recent lava flows during field work in January 1996—two each from the 11 February 1949, 4 June 1954, and 14 July 1954 flows and from the 19 February 1975 avalanche deposits, and three from the 30 June 1954 flow14 (Figure 6). The darker recent lavas were clearly visible and each one easily identified (with the aid of maps) on the northwestern slopes against the lighter-coloured older portions of the cone (Figures 4 and 7). All flows were typically made up of jumbled blocks of congealed lava, resulting in rough, jagged, clinkery surfaces (Figure 8).

The samples were sent progressively in batches to Geochron Laboratories in Cambridge, Boston (USA), for whole-rock potassium-argon (K–Ar) dating—first a piece of one sample from each flow, then a piece of the second sample from each flow after the first set of results was received, and finally, a piece of the third sample from the 30 June 1954 flow.15 To also test the consistency of results within samples, second pieces of two of the 30 June 1954 lava samples were also sent for analysis.

Geochron is a respected commercial laboratory, the K–Ar lab manager having a Ph.D. in K–Ar dating. No specific location or expected age information was supplied to the laboratory. However, the samples were described as probably young with very little argon in them so as to ensure extra care was taken during the analytical work. 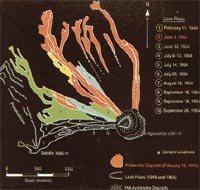 Figure 7. Map of the northwestern slopes of Mt Ngauruhoe showing the lava flows of 1949 and 1954, and the 1975 avalanche deposits.3,4 (Click image for larger view)

The “dates” obtained from the K–Ar analyses are listed in Table 1.16 The “ages” range from <0.27 to 3.5 (± 0.2) million years for rocks which were observed to have cooled from lavas 25–50 years ago. One sample from each flow yielded “ages” of <0.27 or <0.29 million years while all the other samples gave “ages” of millions of years. The low “age” samples were all processed by the laboratory in the same batch, suggesting a systematic lab problem. So the lab manager kindly re-checked his equipment and re-ran several of the samples, producing similar results. This ruled out a systematic lab error and confirmed that the low results were real. Furthermore, repeat measurements on samples already analyzed (A#2 and B#2 in Table 1) did not reproduce the same results, but this was not surprising given the analytical uncertainties at such low levels of argon. Clearly, the argon content varies greatly within these rocks. Some geochronologists would say <0.27 million years is actually the correct “date”, but how would they know that 3.5 million years was not in fact the correct “age” if they did not already know the lava flows were recent?!

Because these rocks are known to be less than 50 years old, it is apparent from the analytical data that these K–Ar “ages” are due to “excess” argon inherited from the magma source area deep in the earth.17 Thus, when the lavas cooled, they contained appreciable (non-zero) concentrations of “normal” 40Ar, which is indistinguishable from daughter radiogenic 40Ar* derived by radioactive decay of parent 40K. This violates assumption (1) of radioactive dating, and so the K–Ar method fails the test. This same failure is also known to occur in many other rocks, including both recent volcanics18and ancient crustal rocks.19

Figure 8. The June 30, 1954 lava flow, showing the jumbled blocks of congealed lava which give it a rough, jagged, clinkery surface.

The radioactive potassium-argon dating method has been demonstrated to fail on 1949, 1954, and 1975 lava flows at Mt Ngauruhoe, New Zealand, in spite of the quality of the laboratory’s K–Ar analytical work. Argon gas, brought up from deep inside the earth within the molten rock, was already present in the lavas when they cooled. We know the true ages of the rocks because they were observed to form less than 50 years ago. Yet they yield “ages” up to 3.5 million years which are thus false. How can we trust the use of this same “dating” on rocks whose ages we don’t know? If the method fails on rocks when we have an independent eye-witness account, then why should we trust it on other rocks where there are no independent historical cross-checks?

However, we do know Someone who was present when all the earth’s rocks formed—the Creator Himself. He has told us when that was, in His eyewitness account in the Bible’s first book, Genesis, so we know how old all the rocks are. How much better to place our confidence in the Creator who made and knows everything, and who never fails or tells lies, than in a radioactive dating method that has been repeatedly demonstrated to fail and to yield false ages for the earth’s rocks.

Fossils are almost never dated by radiometric methods, since they rarely contain suitable radioactive elements. A common way of dating fossils (and rocks which do not contain radioactive elements) is by “dating” an associated volcanic rock. This is commonly done using the K–Ar method. It depends on the rate at which radioactive potassium decays into the gas argon.

The K–Ar method works on the assumption that the “clock” begins to “tick” the moment that the rock hardens. That is, it assumes that no argon derived by radioactive decay was present initially, but after the lava cooled and solidified, the argon from radioactive decay was unable to escape and started to accumulate. However, it is well-known that if a radiometric “date” contradicts a fossil-derived (evolutionary) age, the date is discarded as erroneous. See Lubenow, M., The Pigs Took It All, Creation 17(3):36–38, 1995.

Ed. note, this Creation magazine article by Dr Snelling is based on his technical paper21, which has far more detail about research methods and answers to possible criticisms than was possible in Creation magazine.