Chalk It Up to a Global Flood

At today’s rate of ocean-floor buildup, chalk layers would take millions of years to form. How do creationists explain them?

Those sounds filled the classrooms when I was growing up in Australia, as teachers wrote with sticks of chalk on the chalkboards that lined the front of every classroom. It’s been a long time since teachers have regularly used those tools, but chalk has made a big comeback among craft-lovers, thanks to the spray paint that can turn any surface into a chalkboard.

When I was a boy, cringing at the occasional chalk squeak, I never realized these small white sticks actually came from a thick layer of rock made up of microscopic fossils.

That’s what chalk is: a soft, pure, fine-textured limestone that has a marine origin and is usually white. It consists primarily (90–99%) of the mineral calcite, formed mainly by the shells of floating microorganisms, set in a very fine matrix.1

I learned that fact years later in my university geology class, where I was also taught about the famous White Cliffs of Dover along the coast of southern England. These cliffs are actually beds of chalk 350 feet (110 m) high. What a thrill it was when I later stood on the seashore looking up at these tall white cliffs!

The thrill was marred by one thought: university geology classes teach that these beds of chalk required millions of years to be deposited, as very tiny shells slowly sank and settled on the seafloor and mixed with lime to form an ooze.

Because of chalk bedsʼ fine-grained consistency and voluminous tiny fossil shells, evolutionary geologists have sought to explain their formation based on the limey ooze on today’s ocean floor. This ooze is widespread at depths shallower than 14,775 feet (4500 m). Evolutionary geologists claim that the ooze has accumulated one grain at a time, at a rate of between 0.008 and 0.08 inches (0.2–2 mm) per year.2 The ooze consists almost entirely of the tiny shells of single-celled creatures, because fish and other large creatures get eaten or decay before they even reach the seafloor.

So it would take 100,000 to 1 million years to accumulate the 650-foot (200 m) thickness needed for the homogenous ooze to be converted into chalk. Evolutionists claim the process of depositing chalk lasted for 40 million years.3 That’s the interpretation I heard in my university class, too.

However, since I’m a Christian who believes that God’s Word provides the true account of the earth’s history, and I don’t believe the earth is millions of years old, how could I respond?

Let’s do some digging to resolve this apparent enigma of the chalk beds. 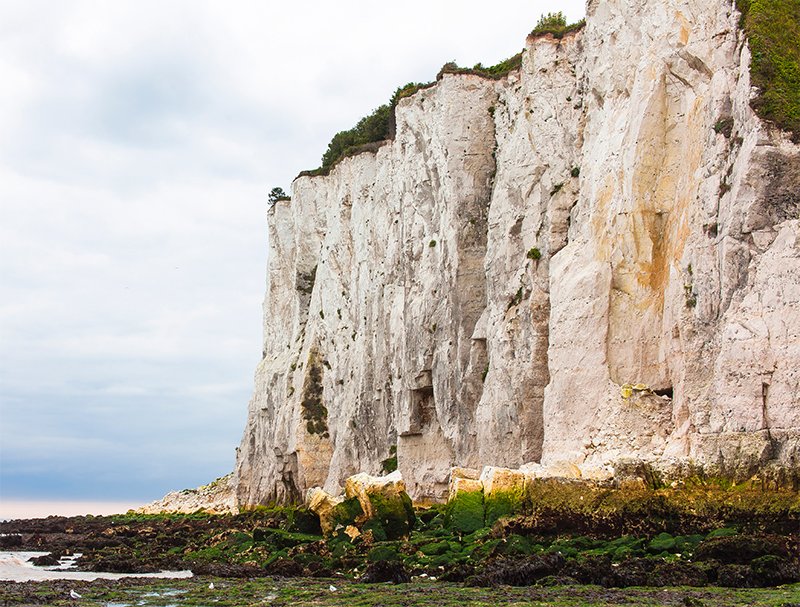 The Extent of the Chalk Beds

First, let’s take a look at where the main chalk beds are located. The white chalk cliffs of Dover are an iconic English landmark, but similar chalk cliffs are also found to the west along the southern English coast near Brighton, and to the north along part of the Yorkshire coast. The chalk beds that connect these areas are estimated to average over 1300 feet (400 m) in thickness. The same chalk beds also crop out along the Antrim coast of Northern Ireland, and can be traced right across Europe (France, Germany, Poland, and beyond) to Turkey, Egypt, Israel, and even Kazakhstan.

All these chalk beds are at the same relative level in the global geologic record. So they represent one global sedimentary rock unit.

Similar chalk beds are found in the Midwestern USA, from Nebraska to Texas, and from Alabama to Colorado. They include the Niobrara Chalk in Kansas, which is famous for its astonishing variety of fossils. Chalk beds are also found in the Perth Basin of southern Western Australia (the Gingin Chalk) and contain the same fossils as the English chalk beds, as well as the same types of rock layers above and below them.

All these chalk beds are at the same relative level in the global geologic record. So they represent one global sedimentary rock unit. This similarity explains why they have all been assigned to the Cretaceous geologic period. (The name itself is derived from creta, the Latin word for chalk.) Since they’re all at the same level, we know all these chalk beds were deposited at the same time.

But did these chalk beds take 40 million years to accumulate? Absolutely not. The unusual, jumbled mix of fossils dispels the evolutionary scenario of slow-and-gradual accumulation of tiny grains in a placid sea over 40 million years.

The Fossils in the Chalk

The chalk fabric consists primarily of the tiny fossil remains of single-celled organisms called foraminifers, and of coccoliths (tiny plates which were the external skeletons of certain kinds of algae), set in a very fine-grained calcite. Even more important is the existence of so many larger fossils found mixed in the chalk beds. How did all these large, diverse creatures get buried in the ooze, unlike what we find on the ocean floor today?

Image courtesy of Andrew A. Snelling

Chalk beds are found all over the world, made of tiny fossil shells from dead microorganisms. The ooze on the ocean floor accumulates too slowly to explain such thick chalk beds worldwide. So they must have been deposited in one massive burial.

How could so many large ocean-dwelling and land-dwelling creatures get buried together in ooze on the ocean floor in the past, when this is not happening today?

Large creatures, such as this extinct swordfish (Protosphyraena nitida) are buried in chalk layers. The ooze on the ocean floor accumulates too slowly today to bury fish and other large animals before they get eaten or decay. So they must have been buried quickly before decay was possible.

Skeptics claim that it is impossible for the chalk beds to have been rapidly deposited during the yearlong biblical Flood. They say it would take a long time for the trillions of foraminifers and coccoliths to breed, grow, die, and be buried to produce these thick chalk beds all around the globe.

When they say this, they assume that ocean water conditions have always been like they are today. But during the global Flood cataclysm, water conditions were very different—hot volcanic waters and nutrients changed the water temperature and chemistry, which caused the rapid blooming of foraminifers and coccoliths in just hours, days, or weeks, not millions of years.6

These skeptics also ignore the fact that these chalk beds were deposited across the continents by ocean waters that rose high enough to completely flood the continents.

Meanwhile, the chalk beds are not found under the ocean floor where the limey ooze is today. And today’s limey oozes are nowhere near as pure in calcium carbonate as the chalk beds formed in the past.

Where do we see limey ooze slowly accumulating on the continents today—and burying and fossilizing huge ocean dwellers (like the extinct plesiosaurs and mosasaurs) together with large land dwellers (like the extinct dinosaurs and pterosaurs)? Or what about the fossil found in the Kansas beds of the voracious predatory fish Xiphactinus audax, 13 feet (4 m) long with a nearly perfectly preserved 6-foot-long (1.8 m) fish Gillicus arcuatus inside of it?

Nowhere! We simply do not see such burial and fossilization happening today on such a massive and catastrophic scale.

To fossilize such large creatures, ginormous amounts of sediments had to bury them instantly before the creatures had time to escape. Fish are known to decompose quickly unless they are completely buried within a few days. Yet the fish found fossilized in the chalk beds show no signs of decay. So the claim that the chalk beds accumulated slowly—one grain at a time falling to the bottom of a placid sea—is demolished by the evidence of all these catastrophically buried fossils.

Now also remember that these chalk beds stretch around the globe. So a global distribution of the chalk beds required a global Flood cataclysm, just as the Bible describes.

Chalk It Up to Assumptions

So what is the underlying message we have dug up? Never be discouraged or dissuaded from believing what God’s Word teaches just because a few skeptics raise what seem to be difficult questions or insist they have evidence that contradicts the Bible. As in this case, closer examination reveals that what they claim as “evidence” is really their interpretation of the data based on their assumption that the Genesis Flood never occurred.

Like the scoffers Peter warned about in 2 Peter 3, they are willfully ignorant or deliberately rejecting God’s Word, and thus they refuse to consider any interpretation of the evidence that would point to the Genesis Flood having occurred. Instead, they are trying to prove what they have already assumed.

But for those of us who seek to know the Lord and understand His work, good answers can be found. Just look at common chalk. It offers phenomenal evidence for the veracity of the biblical Flood—yet another testimony that we can trust God and His Word. Chalk another one up to God’s Word.

Dr. Andrew Snelling holds a PhD in geology from the University of Sydney and has worked as a consultant research geologist in both Australia and America. Author of numerous scientific articles, Dr. Snelling is now director of research at Answers in Genesis–USA.
Previous Article The Zika Threat Next Article Water Doesn’t Always Mix