Thirtieth Anniversary of a Geologic Catastrophe

The May 18, 1980, eruption of Mount St. Helens in the state of Washington is regarded by many as the most significant geologic event of the twentieth century.

May 18 marks the thirtieth anniversary of one of the most violent natural disasters of our time, the colossal 1980 eruption of Mount St. Helens. This catastrophic geologic event not only shocked the world because of its explosive power and made headline news, but challenged the foundations of evolutionary theory.

The May 18, 1980 eruption of Mount St. Helens in the state of Washington is regarded by many as the most significant geologic event of the twentieth century, excelling all others in its extraordinary documentation and scientific study. Although not the most powerful explosion of the last century, that eruption provided a significant learning experience within a natural laboratory for the understanding of catastrophic geologic processes. And thirty years later we learn that Mount St. Helens still confronts the underlying slow-and-gradual assumptions of modern geologic thinking. 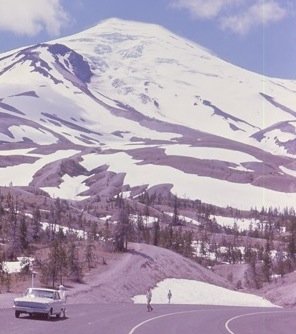 The beautiful mountain before it erupted thirty years ago today. (Photo by R. Fleshman from www.creationism.org) 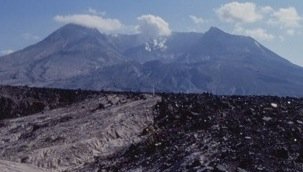 On May 18, 1980, a steam blast equivalent to 20 megatons of TNT destroyed the northern side of the once-pristine shape of the volcano. Geologists, who are accustomed to thinking about slow evolutionary processes forming geologic features, were astounded to witness many of these same features form rapidly as a result of that and subsequent eruptions. We are indebted to Dr. Steven Austin of the Institute for Creation Research for his work in documenting carefully the geologic results of this astounding catastrophe. The following undeniable lessons still confront us, thirty years on.

Up to 600-feet thicknesses of sediment layers formed as a result of the primary air blast, landslides, resultant water wave on nearby Spirit Lake, volcanic ash flows, mudflows, air falls of volcanic ash, and steam water. The most surprising accumulations resulted from the volcanic ash flows that moved at high velocities from the volcano. These deposits included fine volcanic ash beds from a tiny fraction of an inch thick to greater than 3 feet thick, each representing just a few seconds to several minutes of accumulation. Furthermore, one such layered deposit, 25 feet thick, accumulated within three hours during the evening of June 12, 1980. It was deposited from volcanic ash flows moving at hurricane velocity. Geologists were staggered that such coarse and fine sediment layers could be separated into distinct strata by such a catastrophic flow process from a slurry moving at freeway speed.

Sadly, most geologists still conventionally think that such sedimentary layering has to represent long seasonal variations, or annual changes, as layers accumulate very slowly. They normally think that catastrophic sedimentary processes homogenize materials, depositing coarse and fine grains together. However, what researchers observed at Mount St. Helens emphatically teaches us that sedimentary layering does form very rapidly by catastrophic flow processes, such as those that would have occurred during the Genesis Flood.

From everyday experience it is observed that rivers and creeks erode very slowly. Thus it is usually assumed that great time periods are needed to form deep canyons. However, at Mount St. Helens very rapidly erosion occurred, producing erosion features that challenge conventional thinking about how landscapes form.

Two-third of a cubic mile of landslide and eruption debris from the May 18, 1980, eruption covered 23 square miles of the North Fork of the Toutle River, blocking the drainage from Spirit Lake westward into the Pacific Ocean. It was the largest debris avalanche observed in human history! The deposits averaged 150 feet thick. Then on May 19, 1982, another explosive eruption of Mount St. Helens melted a thick snow pack in the crater, creating a destructive, sheet-like flood of water, which became a mudflow. Reaching the landslide and eruption debris deposits of the North Fork of the Toutle River, the flow formed channels which cut through the blockage of the drainage westward. Bedrock was eroded up to 600 feet deep to form two canyons on the north flank of the volcano. Individual canyons up to 140 feet deep were cut through the landslide debris and volcanic ash deposits. The erosion left elevated plateaus to the north and south resembling the North and South Rims of the Grand Canyon. 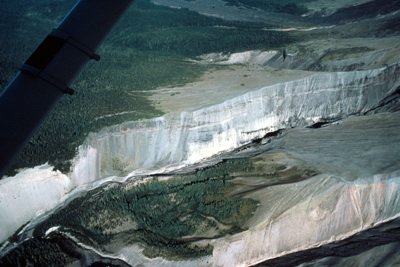 The small creeks which flow through the headwaters of the Toutle River today might seem, by present appearances, to have carved out these canyons very slowly over a very long time period, except for the fact that the erosion was observed to have occurred extremely rapidly! Geologists should thus have learned that the long timescales they have been trained to assign to the erosion of deep canyons are not accurate, and that deep canyons found elsewhere could likewise have formed very rapidly, including the Grand Canyon of Arizona.

The volcanic blast of May 18, 1980, destroyed the surrounding forests. By late that afternoon one million logs were floating on nearby Spirit Lake. Many of these logs were actually floating upright. Even though the roots had been broken off, the logs were thicker at the root end and the wood obviously denser so that the root ends sank before the tops of the logs. Indeed, thousands of upright, fully submerged logs were subsequently observed sitting on the floor of the lake, looking as though they were a forest of trees. Investigations showed many had become buried by more than 3 feet of sediment, while others were still resting on the floor of the lake.

Geologists could easily have misinterpreted these upright buried logs as representing multiple forests that had grown on different levels over periods of many thousands of years. This is in fact how the petrified upright logs at Specimen Ridge in Yellowstone National Park had been interpreted, as successive forests growing over many thousands of years. However, the lesson from Mount St. Helens is that fossilized upright logs had to be buried rapidly.

4. Rapid Formation of a Peat Layer

The enormous log mat floating on Spirit Lake lost its bark and branches, rubbed off by the abrasive action of wind and waves. Scuba investigations of the lake bottom subsequently revealed that sheets of bark intermingled with volcanic sediments had formed a layer of peat many inches thick. Together with broken branches and root materials, the sheets of bark gave the peat a coarse texture and a layered appearance. This “Spirit Lake peat” resembles, both compositionally and texturally, certain coal beds of the eastern United States.

Geologists suppose that coal beds formed by the accumulation of organic material in vast swamps where the plants grew in place. By slow growth and accumulation, they estimate about 1,000 years was required to form each inch of coal. However, typical swamp peat deposits are very fine, with a texture looking like coffee grounds or mashed potatoes. They are homogeneous because of the intense penetration of the roots which dominate swamps. Thus root material is the dominant coarse component of modern swamp peats, while sheets of bark are extremely rare. This is the exact opposite of what was found in the “Spirit Lake peat.” Yet the Spirit Lake peat is texturally and compositionally similar to coal. Thus the lesson from Spirit Lake at Mount St. Helens is that this first formation stage of coal beds is rapid, and due to catastrophic destruction of forests, not the slow and gradual growth of plants in swamps.

Mount St. Helens provided a rare opportunity to study geologic processes that within a few months produced changes that geologists assumed required many thousands of years. Mount St. Helens served as a miniature laboratory for catastrophism! The eruption and its aftermath challenged the timescales most geologists attach to geologic processes and changes that are used to construct the long geologic ages underpinning Darwinian evolution. Thus the Mount St. Helens catastrophe challenged, and still challenges, the slow and gradual interpretation of the accumulation of the geologic record and provides the stepping stone to help us imagine catastrophism on a global scale during the cataclysmic Genesis Flood.