on May 17, 2000
Also available in Español
Share:
Email Using:
Gmail Yahoo! Outlook Other

The following commentary by Ken Ham of AiG was submitted in May 2000 to a few newspapers in the United States to commemorate the 20th anniversary of the eruption of Mount St. Helens in America’s Pacific Northwest.

As I stood staring at the incredible geologic features that resulted from the May 18, 1980 eruption of Mount St. Helens in Washington State, I was reminded afresh of how small and vulnerable we are as humans, but how awesome must be the power of God who created earth and its mountains.

It was hard to believe on May 18, 1980 right where I stood, incredibly hot swirling gases and debris from the explosion had devastated the landscape as the energy equivalent to 400 million tons of TNT (approximately 33,000 Hiroshima-size atomic bombs) was unleashed on this once beautiful landscape—now looking as barren as the surface of the moon.

What struck me even more was that the study of the eruption and its after-effects has challenged the very foundations of evolutionary theory.

In actuality, the eruption of Mount St. Helens was a rather small and localized event. I realized that if a small explosion like this could cause such catastrophic results, what could happen if there were larger explosions all over the globe?

I was thinking this way because the Bible states in Genesis 7:11, concerning the beginning of the great Flood of Noah’s day, that “all the fountains of the great deep [were] broken up.” I believe this is a reference to great volcanic activity across earth, which must have been cataclysmic.

In fact, all over our globe, there’s evidence that in the past there has been much volcanic activity. On the floor of the Pacific Ocean alone, there are an estimated 20,000 volcanoes.

The events associated with the volcano’s explosion accomplished in seconds, hours, or just a few days, geologic work that normally would be interpreted as having taken hundreds or even millions of years. One particular canyon was formed, which has since been named the “Little Grand Canyon.” About 100 feet deep and somewhat wider, it is about 1/40th the scale of the mighty Grand Canyon. This canyon was formed in one day from a mudflow. A newly formed river then flowed through the Canyon formed by the mudflow.

Now I remember being taught in school that when you saw a canyon with a river running through it, you assumed that the river took a long time to erode the canyon. My teachers—not having known what happened at Mount St. Helens—would have concluded the same thing about the small river cutting through the Little Grand Canyon. 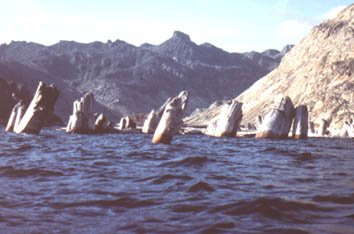 View of Mount St. Helens from Spirit Lake showing logs from the original surrounding forest that was destroyed by the blast. Manmade lowering of the water level has caused the logs to be tilted.

The erosion of this canyon enables scientists to see some of the layers that were laid down. What astonished them were features such as the 25-feet-thick deposit that consisted of thousands of thin layers. In school, I was taught that you assume layers like this were laid down at the rate of perhaps one or two a year. Then you could estimate how long it took for such a deposit to form, perhaps even millions of years. However, this 25-feet-thick series of layers was formed in less than one day—perhaps even just three hours.

People around the world are indoctrinated by evolutionists who believe that layers like those we see at the Grand Canyon took millions of years to be laid down. That belief of “billions of years” is foundational to evolutionary thinking. What happened at Mount St. Helens is a powerful challenge to this belief.

The evidence here shows that one can logically accept that the Flood of Noah’s day—and its after-effects—could have accomplished extraordinary geologic work, carving out canyons and the laying down of sediments in massive quantities all across the globe—just as we see today!

Increasingly, most geologists—evolutionist or creationist—who have been to the Grand Canyon will now acknowledge that the Canyon was carved by a lot of water over a little period of time, not over millions of years.

In 2 Peter 3:7, the apostle Peter writes that in the last days, people will deny that there was a worldwide flood. Just like those who did not listen to the warning of the impending explosion of Mount St. Helens, how much more alert we should be today to heeding the words of Peter who says that there is a judgment to come, an enormous explosion (2 Peter 3:10)—much bigger than Mount St. Helens.