How Could Most Scientists Be Wrong?

What better place to teach geology than the Grand Canyon? Exposed there is a large slice through the rock record of a major part of earth history.

What better place to teach geology than the Grand Canyon? Exposed there is a large slice through the rock record of a major part of earth history. Every year we take groups through the Grand Canyon, and people see in-depth the compelling evidence for the global, cataclysmic Genesis Flood.

Overwhelmed by this evidence, a common response is: “How could most scientists be wrong about its formation?” If the evidence for the catastrophic accumulation of the rock record and its contained fossils in only a year or so, rather than over millions of years, is so compelling, why don’t all geologists accept the evidence and agree that the biblical Flood accounts for the rock and fossil records?

Such questions demonstrate that most people do not understand how geologists deal with the rock and fossil evidence. The only facts are that the rocks and fossils are observed in layers. They can be measured and tested repeatedly in the present. 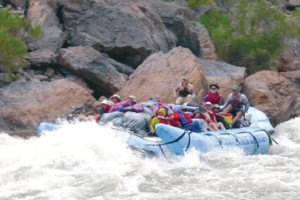 Each year, AiG hosts Flood geology tours of the Grand Canyon with Canyon Ministries. Dr. Andrew Snelling leads some of them.

Sure, we can observe and study today how sediments are deposited in layers. But to say that sediments have always accumulated in the past at the rates we observe today is an assumption. It’s an interpretation based on man’s ideas about the past and is not a proven fact.

Ironically, repeatable measurements and field observations today are demonstrating that sedimentary rock layers had to accumulate rapidly.1 Yet, rather than abandon their millions-of-years dogma to explain the formation of the rock layers, most geologists arbitrarily put the millions of years between the layers. And that’s in spite of the fact that there are no erosion features at the boundaries between the layers to indicate the passage of the supposed millions of years.2

So if geologists didn’t observe the slow formation of the rocks and fossils in the past, can we be sure how quickly they formed? Yes! Past events can be confirmed on the basis of eyewitness testimony, just as court cases depend on eyewitness testimonies.

God’s Word provides us with an eyewitness testimony of the earth’s early history—Creation, Corruption, and Catastrophe (the Flood). God was present and He has told us what happened. The overwhelming evidence for the rapid formation of rock layers and fossils is consistent with, and thus confirms, God’s trustworthy, infallible, eyewitness testimony.

How then could most scientists be wrong? Easily! As we emphasize in the Creation Museum, scientists’ interpretations of the evidence begin with, and are framed by, their starting point. Put another way, who or what are they going to trust? Can scientists by their own observations and reasoning alone establish what happened in the past?

Most scientists, even those who are Christians, have chosen only to view the evidence and interpret it using human reasoning alone! They have bought into the idea that God’s Word is irrelevant when it comes to studying the earth’s history.

That’s how most scientists are wrong. They have chosen finite, fallible man’s word over the Word of the infinite, infallible, all-powerful Creator God. It’s an issue of who is the ultimate authority.

Christians who are scientists are also wrong if they do not choose God’s Word as their ultimate authority. Peer pressure, academic respectability, and human pride are all snares. It’s hard to stand against the tide of the secular scientific consensus.

Jesus Christ walked across the surface of the Sea of Galilee in a storm (Matthew 14:22–33). As the Creator and Sustainer (Colossians 1:16–17), He could defy gravity. With Jesus’s approval, Peter also began to walk across the water. But as soon as he took his eyes off Jesus (the Word), and feared the danger of the storm (the world), he sank and would have drowned had Jesus not rescued him.

No matter how impressive the apparent weight of evidence as interpreted by most scientists may seem, to take our eyes off God’s Word as our ultimate authority will never lead us to the truth about the earth’s past. The fear of the Lord—not man—is the beginning of knowledge and wisdom (Proverbs 1:7; 9:10).

Previous Article Whatever You Do . . . Next Article Dinosaurs—Atheist Exclusive?