The Grand Canyon does not speak of millions of years of formation; it clearly testifies of rapid formation.

The scenic grandeur of Grand Canyon stirs awe-inspired emotion in the millions of visitors who make their way every year to northwestern Arizona. Hardly anything else in the world gives such insight into the geologic timescale of the earth better than this “hole in the ground.” And no other natural wonder causes more contention either. Grand Canyon extends over 250 miles (400 km) through the Colorado Plateau, stretches from 4 to 18 miles (6–30 km) wide and reaches down more than a mile (1.6 km).

Layer after layer of exposed strata provide a spectacular sight for each Canyon guest. The lowest and first of the four major divisions of rock units is made up of many granites, including the Zoroaster Granite, and the Granite Gorge Metamorphic Suite, which includes the Vishnu Schist, forming the crystalline basement of igneous and metamorphic rocks, respectively. Directly above them is the second major division, the Grand Canyon Supergroup, which are tilted layers of strata showing evidence of tectonic activity. The third major division contains horizontally stratified layers in the walls of the Canyon made up of sedimentary deposits in nine distinct layers. The fourth major division includes very localized strata which were deposited on the erosion surface on top of the Kaibab Plateau, and consist of river gravels, lake sediments, landslide deposits, and lava flows. Throughout many of the layers exposed in the walls of Grand Canyon, one can find fossils of marine organisms such as brachiopods, corals and mollusks, as well as sometimes the fossilized footprints and trackways of amphibians and reptiles, ferns, and other plants. Many of these show evidence of rapid burial.

The evolutionary explanation of the Canyon’s formation begins many years ago—in fact, billions of years ago. Basement rocks in Grand Canyon are metamorphic rocks seen as remains of a variety of sediments and volcanic rocks deposited nearly two billion years ago. After granite intrusion episodes, and erosion beginning about 1.5 billion years ago, the whole region was under water. Over hundreds of millions of years, sedimentary and basalt layers were formed. Uplift, tilting and massive erosion followed, before about 550 million years ago the ocean waters moved in and covered the land again to deposit more sediment layers and then retreated. Repeated inundations built up over a mile (1.6 km) of sedimentary rocks in horizontal layers. About 70 million years ago the Colorado Plateau was uplifted, and since then the Colorado River began flowing across the plateau, threading its way and slowly carving its path into all the previously formed rock layers until it reached its present course, millions of years later. Annual seasonal floods in its drainage basin supposedly increased the momentum and volume of water flow, picking up rocks and other debris which tore away at the river’s bottom to eventually carve out the Grand Canyon. 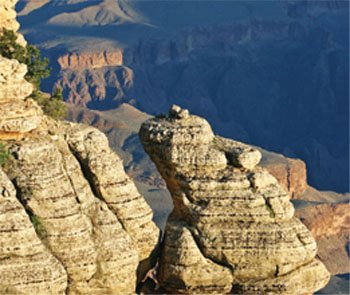 The biblical explanation for how the Canyon formed is actually quite simple. The “basement” layers, consisting of granites and metamorphic rocks, were formed by Day 3 of Creation Week. Some sedimentary layers were deposited on these rocks late in the Creation Week and during the pre-Flood period. The horizontal sedimentary layers were then deposited over all other rocks by the waters of the global Flood as described in Genesis 7-8. These unhindered, swirling currents picked up, transported and eventually deposited tons of sedimentary layers. These strata were then in places tilted and went through great tectonic activity as the Colorado Plateau was uplifted during the final stages of the Flood. The sedimentary layers which make up the nine distinct layers of the third major division of the Canyon walls show that they were soft and unconsolidated when they bent, unlike the basement rocks which fractured. The sand grains in these sedimentary layers show no evidence that the material was brittle and rock-hard, and neither has the mineral cementing the grains been broken. Instead, the evidence points to the whole 4,000-feet (1.220 m) thickness of horizontal strata being still “plastic” when it was uplifted and bent. Once the floodwaters receded, the recently placed layers of sediment continued to harden into rock. As the floodwaters receded, the uplifted plateau acted like a dam wall, trapping the waters behind it. In a subsequent catastrophic event, this earthen dam ruptured, releasing a barrage of water that carved the Canyon itself..

As evolutionary geologists have studied Grand Canyon, many rock samples have been taken to recognized laboratories in attempts to date these rocks. The main method used in these studies is the radioisotope dating method, which is based on the rate of decay of radioactive isotopes. However, it is important to realize that the results of such tests yield only relative amounts of the parent and daughter isotopes, not an actual “age”—it is from these measurements that an “age” is calculated. Because all such age-dating methods are based on assumptions, these methods tend to be unreliable. It has been shown many times that samples taken from the same rocks produce different dates! Additionally, tests on rocks of known age have yielded false results. Many times scientists overlook these “incorrect” dates in order to fit them into their presuppositions about the earth’s age.

Grand Canyon cuts through the landscape of northern Arizona as no other natural feature on Earth. It also cuts through the shaky foundation of evolutionary interpretations that are given to each of the Canyon’s layers. Grand Canyon does not speak of millions of years of formation; it clearly testifies of rapid formation by a land-transforming catastrophe and its after-effects. The fossils entombed in the sediments of the Canyon also remind us of God’s terrible judgment on sin and of the salvation He offers.