One of Australia’s most famous landmarks stands tall against the flat desert region of the “Red Center” of the Northern Territory. More than 400,000 visitors each year come to Uluru, also known as Ayers Rock. It is a monolith, like a huge boulder, that rises over 1,100 feet (340 m) above the desert plain, measures almost six miles (9.6 km) around its base and covers an area of over two square miles (3.2 km2). 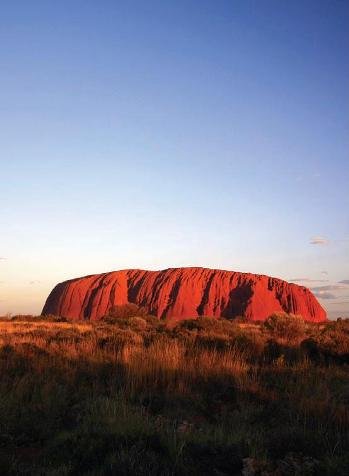 A remarkable feature of Uluru is that the layers of rock within it are tilted almost completely vertical as they stick up out of the earth’s surface. In reality, less than half of Uluru’s strata sequence is visible, the majority remaining hidden beneath the ground, bringing the overall thickness of its rock layers to almost 3.75 miles (6 km).

Uluru is composed mainly of layer after layer of a type of coarse sandstone known as arkose. This rock consists of a mixture of jagged grains including shiny crystals of pink feldspar.

According to the evolutionary timescale, central Australia lay slightly below sea level over 900 million years ago. This shallow depression was called the Amadeus Basin. Over the next few hundred million years, this depression was flooded numerous times, adding layer after layer to the bottom of the basin. Around 550 million years ago, the strata of the Amadeus Basin were folded and uplifted by tectonic activity to form a series of mountains, which separated this area from the nearby oceans. Those mountains began to be eroded through the next couple of hundred million years before a shallow sea returned to cover them and deposit more sediment layers over them. Between 300 and 400 million years ago, the sea receded and once again the land was uplifted, folding all the deposited layers of sediment, bending them nearly 90 degrees and leaving them above the ground in the position we see them today.

Looking at the evidence found in Uluru, we see that this wonderful formation did not result from millions of years of local flooding, erosion, and tectonic activity. Rather, it was formed catastrophically by one major event and its aftereffects.

When we look into the rock layers making up Uluru, we see shiny and fresh (unweathered) pink feldspar crystals. This is significant because such feldspar breaks down rather quickly when exposed to water, heat, and air. When it breaks down, the feldspar forms clay. If Uluru were more than 500 million years old, as supposed by evolutionists, the feldspar would have suffered these breakdown effects of nature, and Uluru would now be a flat accumulation of clay and sand instead of the solid rock that it is. 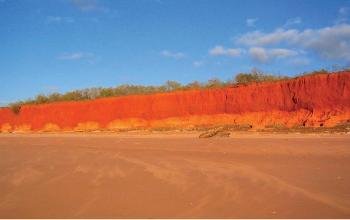 Another evidence of the young age of Uluru is the mixture of jagged mineral grains found in the rock’s layers. If the sand grains had been swept over long distances in a series of local floods, the edges of the grains would have been rounded off and smoothed by constant abrasion. We simply do not find those smooth, rounded grain edges in the Uluru sandstone.

Also, grains acted upon by moving water over long periods of time would naturally sort themselves—larger from smaller. If the layers had been deposited by numerous local floods over millions of years, then the Uluru sandstone would consist of layers of large grains and separate layers of small grains, not the mixture of grain sizes we see in the layers today.

These evidences show that there was not sufficient time for the grains in the sandstone layers of Uluru to sort themselves, or for the feldspar crystals among them to decompose into clay. These layers had to have been deposited quickly in one major event. That event was the global Flood, which generated the precise conditions to tear up, transport, and deposit the nearly 20,000 feet (6 km) of sediment that now make up this formation as layers of jagged, mixed-sized grains. The tectonic activity that ended the global Flood was responsible for the tilting and uplifting of the hardened layers we see at Uluru today. After this uplift, the landscape dried out, turning it into today’s surrounding desert.

When we consider the evidence of Uluru, we see that it points to rapid, catastrophic formation, not slow progressive formation over hundreds of millions of years. So, Uluru is not 550 million years old; it is actually around 4,500 years old, dating back to the global Flood as described in Genesis 7–8.