Grand Canyon—What Is the Message?

The Grand Canyon is a place to find and explore the wonders of God’s creation.

The Grand Canyon in N. Arizona, USA is an awesome spectacle, a classic example of erosion unequaled anywhere on earth.

Carved through sedimentary layers of limestone, sandstone and shale, and into the bedrock of schist and granite, this great chasm stretches 277 miles through the Colorado Plateau. It descends over a mile into the earth and extends as much as 18 miles in width.

The Grand Canyon is also a place to find and explore the wonders of God’s creation. When viewed from a biblical perspective, the Canyon has “God” written all over it, from the splendor and grandeur of the entire area, to the diverse and unique design of the plants and animals that inhabit this “magical” place. They all display the magnificence of the hand of our Creator. 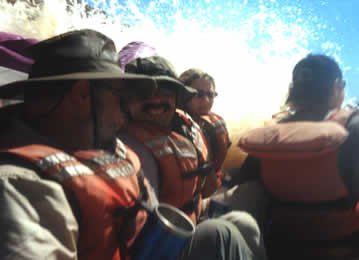 Not only is the Canyon a testimony to the Creator, but it also presents evidence of God’s judgment of the world. It was a judgment by water of a world broken by sin. The Canyon gives us a glimpse of the effects and scale of a catastrophic global flood, the biblical Flood of Noah’s day.

Visitors to the Grand Canyon generally find it to be awe-inspiring, but at the same time, too strange and overwhelming to be fully understood on its own-for the Canyon can’t tell us about itself.

As humans, we tend to ask two questions as we view this vast, grand, mysterious hole in the ground: how and why?

We do have the one and only true history book, the Bible, that can help answer these questions. Even though Scripture does not mention the Grand Canyon, we can do some theorizing based on the evidence that we see and examine in light of the Bible.

As we consider the “how,” we find that virtually all geologists agree that the Grand Canyon was carved by water. The question is how quickly and when. If we examine the prevailing interpretive literature about the Canyon, we find that the views presented are predominantly based on evolutionary theories. For the Canyon, this means that the rock layers were laid down over literally hundreds of millions of years, and that the Canyon was later carved slowly by the Colorado River. These theories tend to deny God’s involvement.

But, if we look at the Canyon through the eyes of a biblical, or scriptural, geologist (those who believe in the Bible’s timeline of a young earth), we will see a very different Canyon. These geologists see a young canyon carved with a massive amount of water, likely in a matter of just days, shortly after the global flood of Noah’s day about 4,300 years ago.

So is there evidence to support a biblical model? Yes. Let’s briefly examine a couple of the areas which do just that. 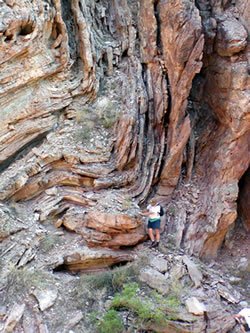 According to the biblical model, the vast majority of the sedimentary layers we see in the Grand Canyon (and in the rest of the world for that matter) were deposited as the result of a global flood that occurred after, and ultimately as a result of, the initial sin that took place in the Garden of Eden about 6,000 years ago.

Let’s look at the folding that is found in the sedimentary rock layers of the Canyon. The picture to the left is a fold in the Tapeats Sandstone in Carbon Creek, one of the side canyons within Grand Canyon. You can plainly see here that the rock was bent, or as the geologist would say, “folded,” while still soft or pliable. Notice that this folding has taken place without cracking the rock. Folds like this indicate that the folding had to happen soon after deposition, and that the deposition and the upheaval responsible for the folding were in fact one event.

Another area that supports the biblical model is the contact lines between the layers themselves. When evolutionists look at this contact point between the Coconino Sandstone and the Hermit Shale, as seen to the right, they see 10 million years of “missing” time and material. 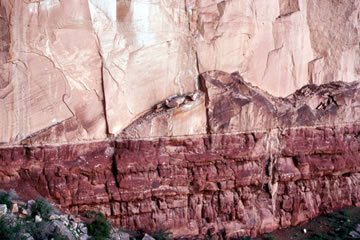 But the creationists, using the biblical model, don’t see “missing” material at all. They see classic flood geology, only on a scale so large that it boggles the mind of the evolutionist.

Note the knife-edge line of the contact point; this contact is the same throughout the length of the Canyon. If this represents 10 million years of missing material, why don’t we see any sign of either physical or chemical erosion between the layers?

So does this “prove” the Grand Canyon is the result of a global Flood or how it was formed? No. It does show, however, that there is a legitimate, scientific alternative to the evolutionary dogma that has permeated our society.

As to the “why” of the Grand Canyon, that is somewhat more speculative. The Canyon is often called “Exhibit A” in support of a young earth, and with the wonderful design of its animals and plants, it also confirms the Master Designer, the Creator God of the Bible. The Bible says: “For since the creation of the world His invisible attributes, his eternal power and divine nature, have been clearly seen, being understood through what has been made, so that they are without excuse” (Romans 1:20). What we see in the Canyon only supports and upholds what we read in the Word of God. And only from down in the Canyon can so much of it be seen.

So is the Grand Canyon there to provide the skeptics with evidence that may be “clearly seen” if only they were willing to see? The heart of the issue is clearly addressed in Colossians 2:8 which reads, “See to it that no one takes you captive through philosophy and empty deception, according to the tradition of men, according to the elementary principles of the world, rather than according to Christ.” It is the elementary principles of the world (or those of man) that have developed the evolutionary theories that reject the Word of God and God Himself.

As you view the Grand Canyon, remember that it is the result of God’s judgment of the world, not just His creative design. As with everything around us, a simplistic “God made this” is really inadequate, as what we see today is not the world He originally made, since it has all been corrupted by the global judgment of sin-Noah’s Flood.

Could God have started a process (evolutionary uniformitarianism) that would have carved the Canyon over millions of years? Perhaps some would say yes, but the issue isn’t what God “could have done.” He could have done it any of a million ways. The issue is what God said He did in His Word.

You can trust God’s Word, right from the very first verse, and the Grand Canyon is one of His most magnificent examples of that.

Tom Vail is the author of Grand Canyon: a Different View and will be the guide on three AiG Grand Canyon river trips next summer. He is a twenty-five year veteran of guiding in the Canyon and with his wife, Paula, runs Canyon Ministries, which provides Christ-centered rafting trips through the Grand Canyon. Tom welcomes opportunities to share the biblical message of the Grand Canyon. You can find out more about their ministry and how to join them on one of their trips by calling (928) 251-3000 in the USA or visiting www.CanyonMinistries.org.