On Thursday, February 28, at about 11:00 PM (Eastern Time) a Florida man was in bed sleeping when a huge hole opened under his house, swallowing part of the inside of his house and him with it.

Because it was deemed too dangerous to keep searching, on Saturday rescue workers called off their search for 36-year-old Jeffrey Bush, who had not been heard from since the hole appeared under his house in Seffner, just east of Tampa, in Hillsborough County. The remains of his house were perched over a huge sinkhole 20 feet wide and at least 30 feet deep, which was seriously unstable. So, on Sunday crews began demolishing the house from outside the perimeter of the sinkhole, which may extend down as much as 50 to 60 feet.

While some in the neighborhood did not know of the risks, sinkholes are common in Florida. In addition to Florida, other U.S. hotspots for sinkholes include Texas, Alabama, Missouri, Kentucky, Tennessee, and Pennsylvania, according to the U.S. Geological Survey.

Under most of Florida’s relatively thin veneer of soils, surface sands, and clays are numerous stacked limestone beds, the total thickness of which is up to 3,000 feet. Conventionally dated as Pliocene to Eocene (supposedly 3–40 million years old), in the biblical framework of earth history these fossil-bearing limestone layers were only deposited after the Flood waters had finished draining off the rest of North America. Their accumulation continued for a few decades into the post-Flood era, prior to the onset of the Ice Age.

On the one hand, these thick limestone beds are a blessing, as they comprise the Floridan aquifer system, a huge reservoir of groundwater stored in interconnected cracks and pores within the rock (see map 1). This Floridan aquifer system is among the most productive in the world, supplying millions of gallons of water to homes and businesses throughout Florida, especially in the Tampa-Orlando area (see map 2). 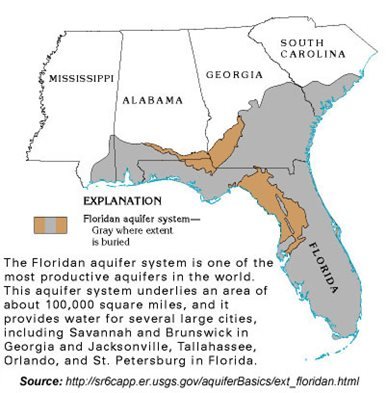 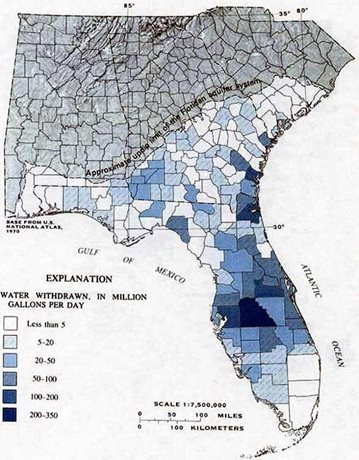 On the other hand, however, these groundwaters are also responsible for creating sinkholes! Unfortunately, these groundwaters within the limestones are slightly acidic. Rainfall percolates down through soils, sands, and clays that contain organic matter, producing humic acid. The slightly acidic groundwater then dissolves the limestone that lies beneath the soil, creating large voids or cavities in the limestone. If such cavities grow upwards, weakening the limestone, then when the overlying sands and clays can no longer support the weight of the soil and whatever is on top of it, the earth collapses into the cavity (see diagram). 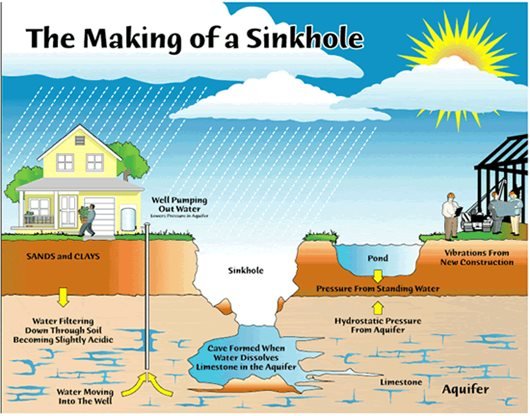 Thus, Florida’s geological makeup increases the likelihood of sinkholes. Development of groundwater resources for municipal, industrial, and agricultural water supplies places additional stresses on this groundwater system and can alter the balance of the natural water cycle. Excessive pumping of groundwater and surface water, as well as periods of drought, can lead to falling regional groundwater levels and cause the soil to settle, thus triggering sinkholes to form. Others form under the weight of runoff-storage ponds, which cause the underground support material to collapse.

Of course, this process does not require millions of years. With all the groundwater being pumped from the limestone, plus high rainfall and other factors, the large cavities that become sinkholes can form in tens to hundreds of years.

Sinkholes of the sort that swallowed this unfortunate Florida man form suddenly. They are called cover-collapse sinkholes. When they occur, a hole typically forms and grows over a period of minutes to hours. Sediments may continue to slump down the sides of the sinkhole for several days, and erosion of the edges can last even longer. Fortunately, these cover-collapse sinkholes are quite rare. A recent assessment of 1,400 sinkholes found only one or two.

As frightening as it sounds, sinkholes happen all the time. Usually, though, they are slow-motion processes that can take years. More common is the slow, gradual subsidence of land, forming bowl-shaped depressions at the surface in a process than can last years, giving those affected plenty of warning.

More than 500 have been reported in Hillsborough County since 1954 (see map 3). A monster 400-foot sinkhole that sucked in a house, five sports cars, two businesses, and part of a swimming pool appeared near Orlando in 1981. Sinkholes can reach more than 100 feet deep and several hundred feet wide. Others are tiny—a few feet across and maybe a foot deep. Some hold water and form ponds. 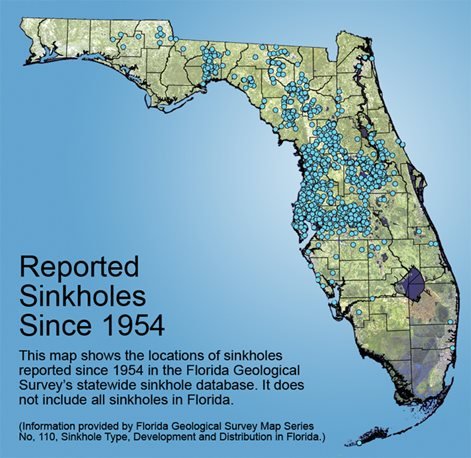 It is fortunate that one sinkhole opening, does not necessarily mean another nearby is imminent. They are usually isolated events, according to the Florida Geological Survey. However, certain events such as a hurricane following a period of drought can trigger a series of sinkholes to occur within minutes to hours of each other.

Sadly, dangerous sinkholes forming suddenly are yet another sign that we live in a sin-cursed world. Tragedies like this can strike at any time, which is a sober reminder that we need to be always ready to meet our Creator (Hebrews 9:27).