A spectacular display of the Creator’s glory runs 24/7, but few get to see it. You must first be willing to plunge into complete darkness, grime, and other extremes. Just ask Buddy Davis, who recently returned from Cumberland Caverns.

Some folks like to call it spelunking, the British call it potholing, but I simply call it caving. And I love it!

The world is filled with spectacular, easy-to-access caves that draw millions of eager visitors each year—like the Big Room at Carlsbad or the endless passages at Mammoth Cave. But visiting one of these caves isn’t the same as caving.

Caving means getting dirty, squeezing through holes or rappelling down cliffs to reach secluded spots that aren’t accessible by concrete steps and handrails. By veering off the beaten path—and carrying the right equipment—we can enjoy treasures seldom seen.

As a believer and an adventurer, I expect evidence of the Creator everywhere I look. Job observed, “Speak to the earth, and it will teach you . . . that the hand of the Lord has done this” (Job 12:8–9). Every cave needle, every gypsum flower speaks of God’s awesome handiwork.

I recently had the opportunity to explore Cumberland Caverns in Tennessee while filming Extreme Caving. It turned out to be just that. We crawled on our stomachs through tight passages too low for us to get on our knees. The next thing we knew, the passage would open into rooms over 50 feet (15 m) high, with some of the most spectacular formations I’ve ever seen.

To get to some rooms, we had to scramble over fields of slippery rocks and boulders called breakdown. Breakdown happens after water, which originally filled the deep cave, drains away. Without water pressure to hold the rocks in place, they begin falling to form a field of rocks.

At times, I felt like I was traveling to the center of the earth. Our guide, Robby Black, told us at one point that we were more than two miles (3 km) inside the mountain, and the surface was more than 400 feet (122 m) overhead.

Few people have ever seen some parts we experienced. We even filmed portions never before captured on video. (And that’s saying something, since this cave was the location for a sci-fi thriller, What Waits Below!)

What Forces Carved These Wonders?

As I struggled through these twists and turns, I had to wonder what massive forces laid down these rock layers and then dissolved them away. Billions of tons of rock, all gone.

The ceiling at the Hall of the Mountain King, for instance, rises 140 feet (43 m) and extends 600 feet (180 m). That’s almost enough space to host two American football games at once! 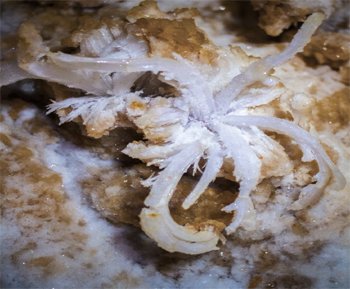 Gypsum Flowers: Gypsum can produce beautiful crystals that look like flowers. Even in the dark corners of caves, we can see reminders of God’s handiwork.

Evolutionists have long said caves took hundreds of thousands, or even millions, of years to form as water slowly dripped through the system. Secular guidebooks still say an underwater stream helped carve out the Cumberland Caverns. A small stream currently flows into the cave, forming a 60-foot (18-m) underground waterfall in the Waterfall Room.

But secular geologists are beginning to suspect catastrophic events unlike anything we see today.

My friend and colleague, geologist Dr. Andrew Snelling, explained that Noah’s Flood deposited the soft limestone layers. That explains why we see billions of fossil shells and other sea creatures in the cave ceilings.

Dr. Snelling also says most caverns were probably carved at the end of, and sometime after, the Flood. The continents remained saturated for a while, until the water drained back into the oceans. Rather than slowly dripping water from above, recent discoveries indicate that warm, highly acidic water—flowing rapidly upward from well below the water table—carved many caves virtually overnight.

So this took place several thousand years ago and explains why the “breakdown” (fields of crumbled boulders) is no longer fresh. It has been stable for years.

After the cavities formed, they were soon filled with new wonders. As we made our way through several passages, the walls and ceilings were decorated with hundreds of stalactites and stalagmites. They are formed by calcite carried by water through fractures and pores in the rocks. When the water evaporates, it leaves behind the milky minerals.

In time, many stalactites and stalagmites grow together, forming columns. Some were over 30 feet (9 m) high and 60 feet (18 m) in circumference! So how’d they have time to form after the Flood?

We know from experiments that they can form quickly—in just tens or hundreds of years. They have been measured growing up to an inch a year. The rate depends on the amount of water and minerals that seep into the cave. Since the rock layers were still saturated at the end of the Flood, with lots of chemically saturated waters flowing quickly through fractures and pores, formations could grow rapidly (much faster than one inch per year). It doesn’t take millions of years.1 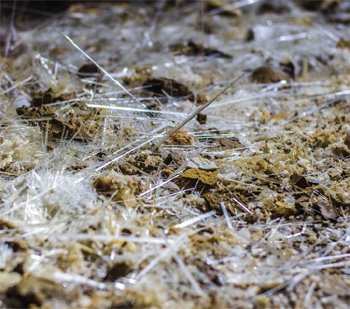 Cave Needles: Certain minerals in caves form crystals that look like glass needles, up to 2 feet (0.7 m) long. How would such delicate wonders survive if the earth is old? 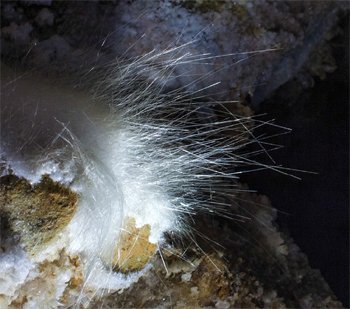 The caves are full of delicate wonders. The Crystal Palace looked like an ice cave, with gypsum and quartz sparkling like a winter wonderland. Such beauty comes as a complete shock after you have been inching your way through pitch-black passageways.

I’ll never forget the gypsum “flowers” in one passage. They are formed by calcium sulfate. You would think you were actually looking at a real flower. Cumberland Caverns has one of the best displays of gypsum flowers in the U.S.

Another amazing formation was the cave needles. They look like glass. Some grow 2 feet (0.7 m) long. Their weight causes many to break off from the walls and ceilings, making a carpet of fragile needles on the cave floor.

What’s most interesting to me, as a creationist, is that these gems are so delicate that few people are allowed to visit. How do such delicacies survive, if the earth is old and always changing?

Our adventures took us to a place with a formation called cave bacon. It really looked the part but was translucent. You could shine a light and see through it. I had fun tasting the cave bacon, but I wouldn’t recommend it for breakfast.

Our crew also found fine hair growing on ledges and rocks. You could gently blow and watch it move. It is another fascinating form of gypsum.

As we entered another room, our headlamps lit up a wonder called popcorn. This is caused by water pressure squeezing through blocked pores in the rocks.

Many other amazing formations awaited in Cumberland Caverns, including soda straws, drapes, curtains, and gypsum crust, which resembles white sand. All give testimony to the Creator’s continuing love and wisdom, as He quickly refilled the earth with new wonders after the Flood.

Buddy Davis is a favorite AiG speaker, especially for children. He travels extensively conducting workshops teaching children how to defend their faith. He is not only a renowned musician and “paleo-artist” but also an adventurer, having taken expeditions to Alaska and Turkey.