This fossil graveyard on the Lake Huron coastline of Michigan is thus just another example of the devastation resulting from that catastrophic global Flood.

In a sunny summer’s day in eastern Lower Michigan (USA), the placid waters of Lake Huron gently lap against the picturesque coastline (Figure 1). By contrast, when storms rage across that vast expanse of open waters, the locals can testify to large waves crashing violently on to those same shores. Yet such storms and waves are minor compared to the scale of the storms, waves, and resultant devastation that must have occurred during Noah’s Flood, as seen today in a fossil graveyard exposed on this same coastline. 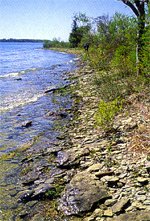 Driving north of Bay City along State Route 23, skirting the shores of Lake Huron, one could easily miss the turnoff to Partridge Point just south of Alpena (Figure 2) if one didn’t know that it was there and that Partridge Point had some geological significance.1 However, at Partridge Point are outcrops of a fossil graveyard, one of many fossil deposits found around the world that are significant as examples of the catastrophism during the Flood.

Partridge Point is a small peninsula of land which juts south-eastward into Lake Huron, dividing the coastline between Thunder Bay to the north and Squaw Bay to the south (Figure 2).2 The shape and orientation of this peninsula is determined by the rock layers of which it is composed, being roughly parallel to the strike of the strata (their elongation direction)—Figures 2 and 3.

The outcrops of interest belong to the Thunder Bay Limestone and are exposed along the shoreline.3 They represent what geologists call the type section of this rock formation—that is, the originally described outcrops of this rock unit that show its features and contents across its thickness, and that then serve as the representative or objective standard against which separated parts of this same rock unit elsewhere may be compared. The outcrops are accessible along the beaches at the water’s edge, and can be reached by crossing vacant land among the private homes and from the unmaintained boat-ramp launch road (Figure 3). 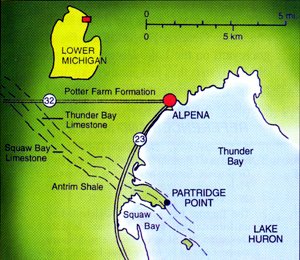 Figure 2: Location map for the Alpena area on the Lake Huron coastline of eastern Lower Michigan (USA), showing Partridge Point and the local extent of the Thunder Bay Limestone. 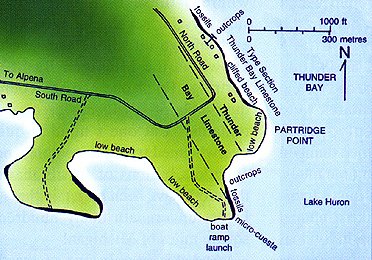 Figure 3: Geologic sketch map for Partridge Point, the type locality of the Thunder Bay Limestone. Outcrops and fossil occurrences along the shingled beaches are shown. 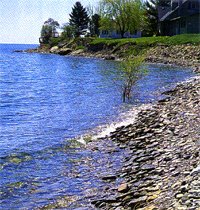 Figure 5: Looking south-east along the main beach at Partridge Point, the type section for the Thunder Bay Limestone (see Figure 3). The limestone shingles contain fossils and the outcrops are to the left, beneath the house and trees.

The sequence of rock types in the outcrops making up the Thunder Bay Limestone is shown diagrammatically in Figure 4. Of particular interest are the light-coloured shaly beds and limestone full of fossilized corals and shellfish.4,5 The remains include the skeletons of animals that once lived attached to the rocky bottom of a shallow sea, such as colonial corals (bunches of corals connected to one another like apartments), solitary corals, bryozoans (‘lace corals’), crinoids (‘sea-lilies’), stromatoporoids (extinct sea creatures of uncertain identification, possibly related to the sponges and corals due to similarity of their limey skeletons), brachiopods (‘lamp shells,’ similar to clams, but with a ‘foot’ for attaching themselves permanently to the sea bottom), and blastoids (relatives of the crinoids and the sea urchins). There are also the fossilized remains of more mobile sea creatures, such as conodonts (extinct animals whose only remains are tiny jaw-like bones with serrations like teeth). A detailed description of these rocks, with a complete list of their fossils, has been compiled.6 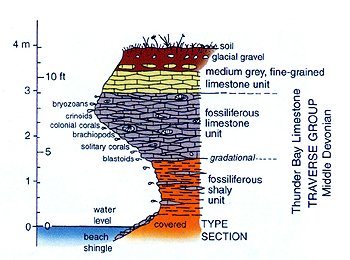 Figure 4: Idealized composite diagram depicting the type or reference section of the rock types and layers making up the Thunder Bay Limestone along the Lake Huron shoreline at Partridge Point. Most fossils found in the shingles of limestone along the beaches have eroded from the fossiliferous limestone unit, and some of these fossils are listed there.

Many of these fossils can be found in pieces of the hard limestone shingles along the beaches (Figure 5). Some of the fossils are shown in Figures 6–8. Of particular interest are the crinoid remains seen in Figure 6, the disks or columnals of the crinoids’ stems or stalks which were once connected and stacked on top of one another.7 After death, crinoids fall apart very quickly, so it is common to find abundant fossilized columnals from broken stalks scattered and jumbled indiscriminately through limestones such as this Thunder Bay Limestone.

However, here we also see, thrown together with these crinoid columnals, pieces of ‘lace coral’ (bryozoans—Figure 6), brachiopod shells (Figure 7), and solitary corals (Figure 8). The limestone that now entombs these remains cannot be where these creatures once lived, because they are not found here in their living positions. The solitary coral, for example, is not seen here attached to the sea bottom, with a distinct hard surface visible in the rock mass, but was completely enclosed in what originally was a soft lime mud which only became rock hard after burying the coral. 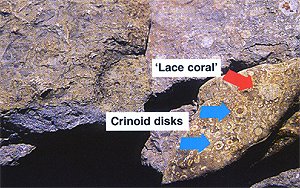 Figure 6: Crinoid columnals or disks from the stalks (end-on and side-on views) scattered haphazardly through the Thunder Bay Limestone. Also shown is some ‘lace coral’ (a bryozoan). 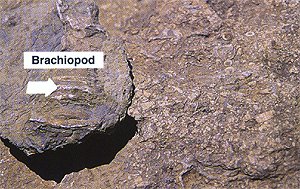 There is, therefore, only one conclusion which makes sense of the evidence—these sea creatures were buried together suddenly when overwhelmed, carried, and then dumped by moving water filled with lime muds. That’s why geologists call this a fossil graveyard. However, unlike a human graveyard today, where the individual graves are neatly arranged, these fossils in these graveyards are all jumbled—tossed together and buried haphazardly in sediments laid down by moving water. 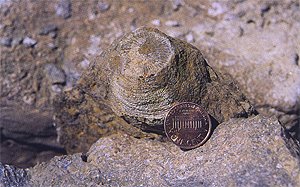 Figure 8: A solitary coral (U.S. penny for scale) surrounded uniformly by what was originally lime mud but now limestone.

But the scale is also impressive. Only a tiny portion of the Thunder Bay Limestone is exposed at Partridge Point, whereas these rock layers extend sideways for several hundred miles in each of two directions across what is known as the Michigan Basin.8 At Partridge Point one can see countless thousands of fossilized sea creatures’ remains. But one’s mind is quickly overwhelmed trying to comprehend the countless billions of fossils that must therefore have been buried in these rock layers underneath many hundreds of square miles of Michigan!

And this is only one of the fossil graveyards found in Michigan. In fact, similar fossil graveyards are found in many places on every continent all around the globe—‘billions of dead things (fossils) buried in rock layers laid down by water all over the Earth.’ This is exactly the evidence we would expect to find based on what the Bible says about the Genesis Flood. This fossil graveyard on the Lake Huron coastline of Michigan is thus just another example of the devastation resulting from that catastrophic global Flood.