An Illustration of the Power of Noah's Flood

On that day the largest flood in living memory swept from the terminus (bottom end) of Skeidarár Glacier. Icelanders call such sudden drainage events jökulhlaups, literally, “glacier bursts.” It is these that lead to mega-scale flooding with devastating consequences.1

Sitting astride the mid-ocean ridge in the North Atlantic Ocean, Iceland is volcanically one of the most dynamic parts of the Earth’s surface. Fresh eruptions occur on average every five years. Yet, because of its high latitude, some 11% of Iceland is covered by glacial ice.2 Indeed, the largest currently glaciated area is called Vatnajökull, meaning “water glacier,” so common is major flooding around its margins.

The western half of Vatnajökull covers part of a volcanic belt (Figure 2), the heat from which maintains a melted lake, even beneath the glacial ice. Known as Lake Grímsvötn, the subglacial water is stored within a large, bowl-shaped volcanic depression formed by the continual heat flow and periodic eruptions.3

As surrounding ice melts, Lake Grímsvötn gradually enlarges over a few years. Ultimately it melts through an ice dam at a low point in the confining landform and drains into a subglacial tunnel. The water usually flows southwards beneath the 8.6-km (5.4 mile)-wide Skeidarár Glacier, discharging at its margin some 50 km (30 miles) away as a mega-flood4 (Figure 2). The cycle starts again as the lake begins to refill. 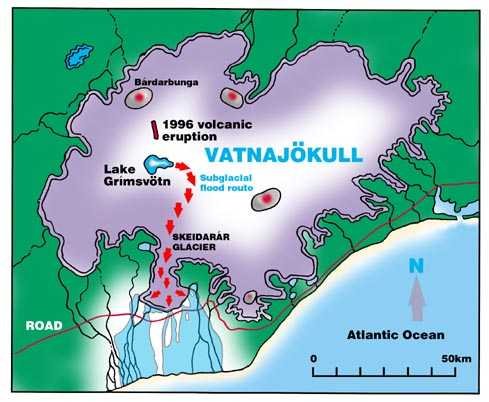 At the end of 1995, fresh volcanic action beneath Bárdarbunga volcano accelerated Lake Grímsvötn’s normal cycle. Magma at over 1100°C moved sideways. It eventually erupted between Bárdarbunga and Lake Grímsvötn on September 30, 1996. A 6-km (4 mile)-long fissure opened through the 450-metre (1500 feet)-thick glacier. In just 13 days, the hot lava melted some 3 cubic km (0.73 cubic miles) of ice.5

As the ice melted, the water drained rapidly along a narrow channel under the glacier into Lake Grímsvötn. Apprehension grew as the subglacial lake swelled some 60 meters (200 feet) higher than its usual trigger level.6 Over four cubic km (one cubic mile) of water had accumulated.7 It was inevitable that the lake would overflow and release the water, instigating a mega-flood. But when? Weeks passed as scientists and journalists watched and waited.

Late on November 4, a steady ground vibration signaled that the glacier on the south-eastern edge of Lake Grímsvötn had moved. Lake drawdown had started.8 Beneath the Skediarár Glacier the water crept at less than walking pace down the 50-km (30 miles)-long tunnel. However, once it emerged from the end of the glacier, about 8 AM next day, the water swept down the alluvial plain in a flood wave. In less than two days, a volume of 3.6 cubic km (0.9 cubic miles) discharged from the glacier, laden with sediment and transporting huge blocks of broken ice.9

The November 1996 jökulhlaup was truly catastrophic compared with the usual mega-floods observed in the last 60 years. A normal mega-flood can take 12 days to peak and last for 17 days, whereas this gigantic jökulhlaup peaked in 20 hours and lasted just two days. The peak discharge thus reached 55,000 cubic meters (two million cubic feet) per second, more than five times the normal mega-flood rate. It was the largest ever recorded in Iceland. It was over twenty times the flow rate of Niagara Falls. In fact, the peak discharge rivaled the flow of the Congo River, the second largest river in the world.10,11

Floodwater surged from the ice margin as new outlets developed. Blocks of ice were ripped out, cutting huge chasms into the end of the glacier. Obstructed by inadequate flow channels behind a major ridge of glacial rubble (terminal moraine) which largely blocked the flow like a wall, water levels leapt higher, overflowing along new paths. Within a few hours an enormous gorge was excavated through this ridge, at least doubling its previous size. Downstream, a huge new channel system over 3 km (2 miles) wide was cut into the alluvial plain.12

During this flood, huge volumes of ice-blocks were detached from the glacier and swept along in the raging waters. Depending on their size, some ice-blocks floated, others rotated, bounced, skipped and slid down-channel. The biggest were 10–15 meters (33–50 feet) high and estimated to be up to 1,000 tonnes in weight. Many huge 200-tonne blocks were strewn across the alluvial plain. Sediment up to 9 meters (30 feet) thick was deposited over an area of 500 square km (200 square miles)—all in less than two days.13,14

Collisions by moving ice-blocks caused considerable damage. A 10-km (6-mile) segment of the premier highway that rings Iceland disappeared (Figure 2). The reinforced-concrete bridge over the Gígja River was totally swept away. The 900 meter (3000 feet) Skeidará River Bridge was severely damaged, even though its foundations were buried to a depth of 15 meters (50 feet) to withstand mega-floods. Iceland’s main high-tension power-lines were severed, and the telephone cables ripped apart.15,16

Icelandic history records about 60 such cataclysms since the Vikings arrived in the ninth century. However, scientists were skeptical of the previous awesome descriptions of fantastic floods. Now that this mega-flood has been observed, many times larger than previously measured, it is considered that these stories are probably true.17

At 55,000 cubic meters (two million cubic feet) per second, Iceland’s deluge was of apocalyptic proportions. It destroyed reinforced-concrete bridges, swept along 1000-tonne blocks of ice, eroded 3-km-wide canyons and dumped 9 meters of sediment over 500 square km. Mercifully, it lasted only two days. Yet, on a world scale this was only a local flood. It affected only a small part of one tiny island on our planet. What would the global, year-long biblical Flood have achieved? Iceland’s devastating November 1996 jökulhlaup testifies to the power of Noah’s Flood and that it can easily explain the building of the geological record.

Skeptics who deny the historicity of the Genesis account need to learn from Iceland’s latest mega-flood. Just because past eyewitnesses describe processes larger than we have observed does not mean they were exaggerating.18 We need to recognize the limitations of our experience. We have not observed all the geological processes that actually fashioned this planet.