How Could the Heart Mountain Slide Occur in Only 30 Minutes?

Despite more than 100 years of study, the Heart Mountain detachment remains among the world’s most puzzling geological structures. 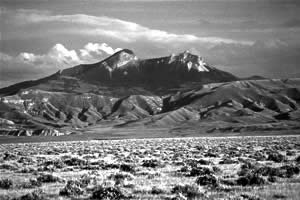 The Heart Mountain Detachment (no longer considered an overthrust) was a huge slide that occurred in the early Cenozoic (about 50 million years ago within the uniformitarian timescale). The initial block of carbonate rock covered an area of 425 mi1 (1,100 km2) near the northeast edge of Yellowstone National Park. Although the current fault plane dips gently to the southwest,3 uniformitarian scientists believe the carbonates slid down a slope of less than 2° toward the southeast. The block broke up into at least 50 large fragments and spread over an area greater than 1,360 mi4 (3,500 km5). The carbonates are about 1,650 feet (500 m) thick, but uniformitarian geologists believe the rocks were 1.25 to 2.5 miles (2 to 4 km) thick during the slide and were later eroded.6

Many of the fragments ended up over the valley fill sedimentary rocks of the northwest Bighorn Basin. Heart Mountain (figure 1) is one of those fragments, which slid about 40 mi (60 km), coming to a stop on a gentle incline. The McCulloch Peaks represent the most distant fragments, 55 miles (85 km) from the breakaway point.

The cause and displacement of the slide have been mysterious and controversial for over 100 years within uniformitarian circles. Hauge exclaimed:

Despite more than 100 years of study, the Heart Mountain detachment remains among the world’s most puzzling geological structures.7

What is the uniformitarian mechanism?

Uniformitarian geologists have debated whether the displacement of the Heart Mountain fragments occurred catastrophically or slowly. Based on two recently published papers, researchers favor catastrophic emplacement.8,9 The Heart Mountain slide is believed to have taken only 30 minutes!10

For such an event, uniformitarian geologists need a catastrophic mechanism. Besides the problem of initiating the slide on a low slope, there is the problem that the carbonates broke off within a strong rock layer, when the slide could have detached from weaker underlying rocks.11 Furthermore, strata just below the slide surface is commonly undeformed. Many mechanisms have been proposed in the past, none of which had enough support.

Two mechanisms are currently competing, but after a volcanic eruption had already initiated the slide. There is the question of whether an eruption of the type envisioned by uniformitarian geologists is capable of initiating the slide. One mechanism is that friction along the sliding plane released CO2 from the carbonates, providing a “gas cushion” that aided further movement.12 The second hypothesis suggests that friction was reduced by the heating of water within the lowermost layer, causing a “fluid overpressure.”13 This heating was aided by lava extruding upward in vertical cracks. Both these hypotheses seem unlikely, and they will be difficult to test.

The end of Noah’s Flood (about 4,400 years ago) offers a more straightforward mechanism. First, the events occurred underwater. Second, sliding friction would have been reduced, and the Heart Mountain Detachment could have been buoyed by a cushion of water or steam. Since volcanic rocks had already been deposited before sliding,14 the uniformitarian geologists are likely correct that a volcanic eruption caused the slide. Third, the eruption would have been much more catastrophic, occurring during uplift of mountains and continents and accompanied by great earthquakes.15 Much more energy is available in the Flood paradigm.

Evidence for an underwater event during the Flood is provided by the emplacement of vertical trees, dropped into the Absaroka volcanics—after the slide. These volcanics mostly represent layer upon layer of volcanic debris flows and ash beds that accumulated several thousand feet thick over eastern and northern Yellowstone Park and vicinity.16 The Absaroka volcanics soon covered most Heart Mountain Detachment fragments. The volcanics contain multiple layers of vertical trees at various locations (figure 2), interpreted to be multiple “fossil forests” by uniformitarian scientists. After emplacement, the Absaroka volcanics were greatly eroded into deep valleys. Creationist geologist Harold Coffin has studied Yellowstone National Park for several decades. He concluded that the trees, representing widely different climatic regimes, were emplacement from a mat of floating logs during the Flood.17

An example for the emplacement of these Heart Mountain carbonate blocks is provided by huge blocks of solidified lava that slid off the Hawaiian Islands into the deep sea.18 Although the initial movement of the Hawaiian lava blocks was down a steep slope, the continuous sliding over a low slope on the bottom of the ocean simulates what would have happened to the Heart Mountain fragments during the Flood.