Many do not realise that index fossils are still crucial to the millions-of-years geological dating, in spite of the advent of radioactive 'dating' techniques.

For most people, the discovery of fossilised wood in a quarry would not be newsworthy. However, some pieces recently found embedded in limestone alongside some well-known ‘index’ fossils (see aside below) for the ‘Jurassic period’ (supposedly 142–205.7 million years ago) have proved highly significant.

It is not generally realised that index fossils are still crucial to the millions-of-years geological dating, in spite of the advent of radioactive ‘dating’ techniques. Not all locations have rocks suitable for radioactive ‘dating’, but in any case, if a radioactive ‘date’ disagrees with a fossil ‘date’ then it is the latter which usually has precedence.

Finding this fossil wood in Jurassic limestone suggested the possibility of testing for the presence of radiocarbon (14C). Most geologists, however, would not bother with such tests because they wouldn’t expect any 14C to still exist. With a half-life of only 5,570 years, no 14C should be detectable after about 50,000 years, let alone millions of years, even with the most sensitive equipment. So this fossilised wood from the Marlstone Rock Bed of Jurassic ‘age’ had potential for testing the validity of the fossil dating technique underpinning modern geology.

The Marlstone Rock Bed is a distinctive limestone unit that outcrops from Lyme Regis on the Dorset coast of southern England, north-eastwards to just west of Hull near the North Sea coast (Figure 1).1 In many places, the top 5–30 cm (2–12 inches) or more of this bed has been weathered and altered, the original green iron minerals2 being oxidized to limonite (hydrous iron oxides), and also in a few areas the sand content is higher. In the past, the outcrop has been quarried frequently for iron ore or building stone.

Evolutionary geologists consider that the top three metres (10 feet) of the Marlstone Rock Bed represent the whole of the Tenuicostatum Zone, the basal zone of the Toarcian Stage,3 the last stage of the Early Jurassic. This ‘dating’ is based on the presence of the ammonite index fossil Dactylioceras tenuicostatum.4

Thus the bed is said to be about 189 million years old according to the geological time-scale.5

Amongst the remaining quarries still ‘working’ the top of the Marlstone Rock Bed are the Hornton Quarries at Edge Hill near the village of Ratley, on the north-western edge of the Edge Hill plateau, some 10½ km (6½ miles) north-west of the town of Banbury (Figures 2 and 3). Building stone, known as ‘Hornton Stone’, has been quarried there since medieval times.6,7

A ‘dating’ test at Hornton Quarries

During two visits to the Hornton Quarries, it was established that fossil wood occurs alongside ammonite and belemnite index fossils (see aside below) in the ‘Hornton Stone’, the oxidized silty top of the Marlstone Rock Bed. The ammonite recovered in the quarries is Dactylioceras semicelatum (Figure 4), abundant in a subzone of the Tenuicostatum Zone.1 Fossil wood was actually found sitting on top of a fossilised belemnite (Figure 5), probably belonging to the genus Acrocoelites, a Toarcian Stage index fossil in north-west Europe.8 Many such belemnite fossils had been found during quarrying operations (Figure 6). Together these index fossils have, in evolutionary reckoning, established the rock containing them as being Early Jurassic and about 189 million years old.9,10 Logically, the fossil wood must be the same ‘age’. 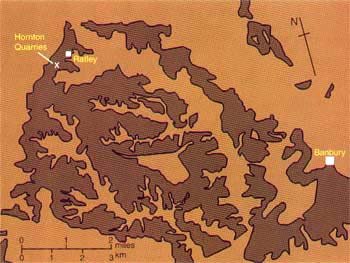 Figure 2. Locality map showing the distribution of the Marlstone Rock Bed west of Banbury, and the Hornton Quarries at Edge Hill near the village of Ratley.

Three samples of fossil wood were collected from the south wall of Hornton Quarries, one from immediately adjacent to the belemnite fossil (Figure 5) during the first visit, and two from locations nearby during the second visit. All the fossil wood samples were from short broken lengths of what were probably branches of trees fossilised in situ. The woody internal structure was clearly evident, thus the samples were not the remains of roots that had grown into this weathered rock from trees on the present land surface. When sampled, the fossil wood readily splintered, diagnostic of it still being ‘woody’ in spite of its impregnation with iron minerals during fossilisation.

Pieces of all three samples were sent for radiocarbon (14C) analyses to Geochron Laboratories in Cambridge, Boston (USA), while as a cross-check, a piece of the first sample was also sent to the Antares Mass Spectrometry Laboratory at the Australian Nuclear Science and Technology Organisation (ANSTO), Lucas Heights near Sydney (Australia). Both laboratories are reputable and internationally recognised, the former a commercial laboratory and the latter a major research laboratory.

The staff at these laboratories were not told exactly where the samples came from, or their supposed evolutionary age, to ensure that there would be no resultant bias. 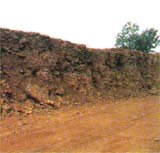 Figure 3(a) General view of the south wall of the Hornton Quarries at Edge Hill near Ratley, north-west of Banbury. 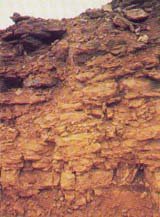 (b) Closer view of the quarry face of the south wall showing the oxidized limestone of the top of the Marlstone Rock Bed which is quarried as ‘Hornton Brown’ building stone.

Quite obviously this radiocarbon ‘age’ is drastically short of the ‘age’ of 189 million years for the index fossils found with the fossil wood, and thus for the host rock.

Of course, uniformitarian geologists would not even test this fossil wood for radiocarbon. They don’t expect any to be in it, since they would regard it as about 189 million years old due to the ‘age’ of the index fossils. No detectable 14C would remain in wood older than about 50,000 years. Undoubtedly, they would thus suggest that the radiocarbon, which has been unequivocally demonstrated to be in this fossil wood, is due somehow to contamination. Such a criticism is totally unjustified (see aside two).

The fossil wood in the top three metres of the Marlstone Rock Bed near Banbury, England, has been 14C ‘dated’ at 23,000–23,500 years BP. However, based on evolutionary and uniformitarian assumptions, the ammonite and belemnite index fossils in this rock ‘date’ it at about 189 million years. Obviously, both ‘dates’ can’t be right!

Furthermore, it is somewhat enigmatic that broken pieces of wood from land plants were buried and fossilised in a limestone alongside marine ammonite and belemnite fossils. Uniformitarians consider limestone to have been slowly deposited over countless thousands of years on a shallow ocean floor where wood from trees is not usually found.

Figure 4. The ammonite index fossil Dactylioceras semicelatum recovered from the top section of the Marlstone Rock Bed in the Hornton Quarries at Edge Hill.

Figure 5. Fossil wood in the top section of the Marlstone Rock Bed exposed in the south wall of the Hornton Quarries at Edge Hill. The pen is not only for scale, but points to an end-on circular profile of a belemnite fossil sitting directly underneath the fossil wood (sampled as UK-HB-1).

However, the radiocarbon ‘dating’ of the fossil wood has emphatically demonstrated the complete failure of the evolutionary and uniformitarian assumptions underpinning geological ‘dating’.

A far superior explanation for this limestone and the mixture of terrestrial wood and marine shellfish fossils it contains is extremely rapid burial in a turbulent watery catastrophe that affected both the land and ocean floor, such as the recent global biblical Flood.

Figure 6. Four belemnite fossils, probably Acrocoelites, recovered from the top section of the Marlstone Rock Bed in the Hornton Quarries at Edge Hill (pen for scale). These cylindrical skeletal shells of the belemnites which taper to apices are called rostrums (ref. 2, of Index fossils and geologic dating, aside below).

The 23,000–23,500 year BP 14C ‘date’ for this fossil wood is not inconsistent with it being buried about 4,500 years ago during the Flood, the original plants having grown before the Flood.

A stronger magnetic field before, and during, the Flood would have shielded the earth more effectively from incoming cosmic rays,11 so there would have been much less radiocarbon in the atmosphere then, and thus much less in the vegetation. Since the laboratories calculated the 14C ‘ages’ assuming that the level of atmospheric radiocarbon in the past has been roughly the same as the level in 1950, the resultant radiocarbon ‘ages’ are much greater than the true age.12,13

Thus, correctly understood, this fossil wood and its 14C analyses cast grave doubts upon the index fossil ‘dating’ method and its uniformitarian and evolutionary presuppositions.

On the other hand, these results are totally consistent with the details of the recent global Genesis Flood, as recorded in the Creator’s Word — the Bible.

To evolutionary geologists, fossils are still crucial for dating strata, but not all fossils are equally useful. Those fossils that seem to work well for identifying and ‘dating’ rock strata are called ‘index’ fossils.

To qualify as an index fossil, a particular fossil species must be found buried in rock layers over a very wide geographical area, preferably on several continents. On the other hand, the same fossil species must have a narrow vertical distribution, that is, only be buried in a few rock layers. The evolutionist interprets this as meaning that the species lived and died over a relatively short time (perhaps a few million years). Therefore, the rock layers containing these fossils supposedly only represent that relatively short period of time, and thus a ‘date’ can be assigned accordingly on every continent to the rock layers where these fossils are found. The ‘date’ relative to other index fossils and rock layers is, of course, determined by the species’ position in the evolutionary ‘tree of life’.14

Among well-known index fossils are ammonites (extinct, coiled-shell cephalopods, marine molluscs similar to today’s Nautilus), and the belemnites (extinct, straight-shell cephalopods).15 Both are fossils of squid-like creatures, common to abundant in so-called Mesozoic rocks. They are very important index fossils for ‘dating’ and correlation of rock layers, for example, across Europe, particularly for the so-called Cretaceous and Jurassic periods of the geological time-scale,16,17 which are claimed to span 65–142 and 142–205.7 million years ago respectively.18 However, these index fossils have not been ‘dated’ directly by radioactive techniques.

Could the radiocarbon be due to contamination?

Four reasons why not