When it comes to the dating of sedimentary rocks, the fossils in them are of paramount importance.

In the words of the late Derek Ager, ‘… fossils have been and still are the best and most accurate method of dating and correlating the rocks in which they occur …’1

Why is this so?

Figure 1. Click here for a larger image. Location map for the Newvale No. 2 Coal Mine, north of Sydney on the east coast of Australia.

Uniformitarian geologists and evolutionary paleontologists believe that as countless creatures lived and died over millions of years of Earth history, some were buried in slowly accumulating sediments and then fossilised. Accumulated genetic changes over millions of years supposedly resulted in the evolution of new species, genera and families. So when fossils are found in sedimentary rock layers, they are identified within the context of where they fit in the evolutionary ‘tree of life’, and a millions-of-years ‘age’ is therefore assigned to the fossil and the rock accordingly.2

In recent years a variety of techniques have been developed to ‘date’ some rocks and minerals using the decay of radioactive elements in them. These methods include potassium-argon, rubidium-strontium, uranium-thorium-lead and samarium-neodymium dating. They are used, for example, on layers of volcanic rocks above and below fossil-bearing sedimentary rock layers. Thus these methods, though not directly dating the fossils, have often ‘confirmed’ the millions of years ages assigned to the rocks and fossils by their interpretation within the uniformitarian and evolutionary framework.

The only radioactive dating method that could be directly applied to many fossils is radiocarbon or carbon-14 (14C) dating. However, because radiocarbon decays relatively rapidly, it is only useful in practice up to about 50,000 years.3 Thus most fossils, being regarded as millions of years old, are never tested for radiocarbon, because they are not supposed to have any left. 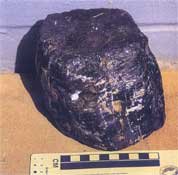 Figure 2. General view of the fossilised tree stump (scale bar in cm). The shiny coalified bark around the perimeter can be clearly seen.

Figure 3. Click here for a larger image. The local geological column for the upper portion of the Newcastle Coal Measures showing where the Great Northern coal seam occurs.

Among the sedimentary rock layers, some of the most significant are coal beds. These can be tens of metres thick and stretch for many hundreds of square kilometres. They consist of the broken remains—leaves, twigs, bark, logs, etc.—of countless millions of trees of many varieties. Usually the process of fossilising this vegetation debris obliterates most of the recognisable features of these individual components, as the whole buried mass is transformed into coal.

However, sometimes components can be identified—for example, fossilised tree stumps sitting on top of coal beds. Such a fossilised tree stump was found by miners in the Newvale No. 2 (underground) Coal Mine north of Sydney, Australia (Figure 1). A portion of it was saved by one of the miners (Figure 2).

One of the major coal beds exploited in the Newvale No. 2 Coal Mine is the Great Northern Seam, near the top of the sequence of rock units known collectively as the Newcastle Coal Measures (Figure 3) within the Sydney Basin. Based on the plant fossils found in them, these coal beds (including the associated mudstone in which the stump was found) have been designated Upper Permian, which uniformitarian geologists would therefore assign to a period of Earth’s history around 250 million years ago.4,5

Figure 4 shows the relative position of the fossilised tree stump when it was found, surrounded by a 150 mm (almost 6 inches) thick layer of mudstone sitting directly on top of the coal (Great Northern Seam). That portion of the fossilised tree stump recovered has a diameter of 110 mm (almost 4½ inches) and stands 100 mm (about 4 inches) high (Figure 2 and Figure 5). A shiny thin ‘skin’ encompasses the outer perimeter (Figure 2, Figure 5 and Figure 6) and represents the original tree bark, which upon burial was coalified. In contrast, the former wood has been silicified (literally turned to stone by impregnation with silica), though it is dull black from still being carbon-rich (Figure 6).

Figure 4. Click here for a larger image. Diagram to illustrate the relative position of the fossilised tree stump sitting on top of the Great Northern coal seam (not drawn to scale).

Small pieces of the coalified bark and the silicified wood immediately underneath it were sent for radiocarbon (14C) analyses to Geochron Laboratories in Cambridge, Boston (USA), a reputable, internationally-recognized commercial laboratory. The laboratory staff were not told exactly where the samples came from, or their supposed evolutionary age, to ensure that there would be no resultant bias. This laboratory uses the more sensitive accelerator mass spectrometry (AMS) technique for radiocarbon analysis, now recognized as producing the most reliable results, even on minute quantities of carbon in samples.

The radiocarbon results are listed in Table 1. There was detectable radiocarbon in the coalified bark, yielding a supposed 14C ‘age’ of 33,700 ± 400 years BP (before present). On the other hand, the small quantity of carbon extracted from the silicified wood sample was insufficient to yield a finite 14C ‘age’, so the result could only be reported as >48,800 years BP, beyond the detection limits. Of course, the wood inside a tree stump would not be >15,100 years older than the bark enclosing it. So the 14C ‘age’ of the bark places an ‘age’ limit on the immediately underlying silicified wood.

Of course, if the wood really were 250 million years old as is supposed, one should not be able to obtain a finite age from radiocarbon—all detectable 14C should have decayed away in a fraction of that alleged time.

Figure 5. Another view of the fossilised tree stump (scale bar in cm). The shiny coalified bark can again be clearly seen, as can the dull silicified wood within the stump.

The most obvious objection that might be raised against these radiocarbon results by sceptics uncomfortable with the implications is that the minute quantity of radiocarbon detected in this fossilised tree stump is due to contamination. 6 Such a criticism is unjustified, and by implication casts a slur on the radiocarbon laboratory’s Ph.D. scientific staff. As qualified routine practitioners, they understand the problem with contamination, and how to avoid it in sample preparation. Yet they reported these analyses as genuine in situ radiocarbon (14C). Furthermore, the last column of Table 1 lists the d13CPDB results, which are consistent with the analysed carbon in the fossilised tree stump representing organic carbon from wood, not from contamination. 7

Another objection is that acceptance of these results as genuine 14C ‘ages’ is based on bias, incompetence or ignorance.8 However, those who would make such accusations in reality reject these results primarily because such 14C ‘ages’ ‘cannot possibly’ be obtained from a fossilised tree stump sitting in a layer of ‘250 million years old’ Upper Permian mudstone. Of course, such pronouncements are based solely on a rock-and-fossil dating scheme derived from evolutionary and uniformitarian beliefs, not from some independent, objective scientific standard.

Figure 6. A close-up of the fossilised tree stump (scale bar in cm). Not only can the shiny coalified bark be seen, but also the growth rings in the dull silicified interior wood.

Within the Creation/Flood framework of Earth history, the Flood occurred about 4,500 years ago. Therefore, even though this tree stump must have grown before the Flood (to be then buried and fossilised in sediments laid down by the Flood) there cannot have been more than about 5,000 years at most since it died.

However, a 33,700 ± 400 years BP radiocarbon ‘age’ for this fossilised tree stump is neither inconsistent nor unexpected. A stronger magnetic field before, and during, the Flood would have shielded the Earth more strongly from incoming cosmic rays,9 so there would have been much less radiocarbon in the atmosphere then, and thus much less in the vegetation. Since the laboratory calculated the 14C ‘age’ based on the assumption that the level of atmospheric radiocarbon in the past has been roughly the same as the level in 1950, the resultant radiocarbon ‘age’ is much greater than the true age.10

On the other hand, a 33,700 ± 400 years BP radiocarbon ‘age’ emphatically conflicts with, and casts doubt upon, the evolutionary fossil and uniformitarian rock ‘age’ of 250 million years for this fossilised tree stump. Clearly, the radiocarbon dating method, although demonstrating that the specimen cannot be millions of years old, has not provided its true age.11 However, correctly understood, this radiocarbon analysis is totally consistent with the biblical account of a young Earth and a recent global Flood, as recorded in the book of Genesis by the Creator Himself.