The Effect of Mutations Down on the Farm

A closer look at how different mutations affect livestock can give a better understanding of the role mutations play in our world.

Mutations can be defined as any change in the sequence of DNA, the complex molecule which codes for life. Many teach that such changes are accidents or errors. While this is certainly possible, it is not something scientists can observe directly. So to say that mutations are errors is really an opinion or educated guess.

Many mutations have been identified that cause disease, and it is certainly easy to believe that these are probably the result of errors. Mutations causing disease are often the easiest to find because there is a considerable amount of money spent on disease research. However, more information is becoming available on mutations that can be valuable in some way. A closer look at how different mutations affect livestock can give a better understanding of the role mutations play in our world.

There are thousands of different genes1 involved in normal growth and development. When bones develop in a lamb, some genes signal for the bone to grow, and other genes signal for bone growth to stop. It is amazing how these genes are turned on or off at the proper time so that a little lamb can develop into a healthy adult sheep.

Some lambs have a mutation in a gene that signals for bone growth to stop.2 This mutation results in a defective protein, so the bones continue to grow longer. As with all genes, a lamb will carry two copies of this gene, one inherited from each parent. Lambs carrying only one copy of this mutation are healthy but tend to grow a bit larger than normal. Lambs with the mutation in both copies of this gene have a disease known as spider lamb syndrome. These lambs have severe abnormalities in their skeleton and generally die, resulting in serious loss to the owner.3

Sheep are seasonal breeders. This means that there is only one part of a year that a ewe can get pregnant. Since the ewe can only give birth once a year, a farmer can get more lambs if the ewe has more than one lamb at a time. Most sheep give birth to a single lamb or sometimes twins. However, there are some sheep that can have 3 or 4 lambs at a time: a nice sized litter!

The Booroola Merino sheep of Australia often produce large litters. A mutation was identified in a gene which causes this.4 If a ewe has only one copy with this mutation, she will have an average of one extra lamb per litter. If she carries the mutation in both copies of this gene, she will average between one and two extra lambs.5 It is believed that this mutation was introduced from certain sheep in India. The same mutation is also in a breed of sheep in Indonesia.6

Mutations in a second gene can also affect litter size.7 There are several different mutations that have been identified in this gene. In most cases, one copy of the mutant gene will result in the ewe averaging more lambs per litter, but two copies result in ewes that are infertile.8 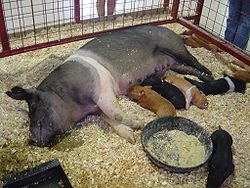 This black Hampshire sow carries a mutation that keeps the protein “switch” to produce darker pigment “turned on.” Red pigs carry a different mutation in the same gene that keeps the switch off. The white belt around the shoulders is from a mutation in a different gene. While these mutations do not build complexity, they do allow for interesting variety. There are no obvious problems caused by these mutations, even when two copies are carried. Image by Whhalbert, via Wikimedia Commons.

This gene appears designed to be able to change. Many mutations have been found in this gene, but none cause disease.13 They do add to the variety of colors we see in animals. For example, some mutations will cause the switch to remain on, regardless of any signal from other genes. This is the reason why certain pigs, such as the Hampshire, are black. Different mutations can make it so the switch is always off. This is the case in the red Duroc. There are other interesting patterns found in this gene. Based on these patterns, it has been suggested that God may have designed ways to make this gene change.14 This would mean that some of these mutations are not accidents, but the result of intelligently designed programming in the DNA. 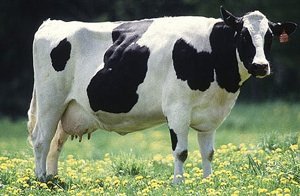 Some dairy cattle carry a mutation in a gene which causes them to produce milk with a higher percentage of fat. This can benefit farmers and is not associated with any obvious harmful effects. Photo from USDA.

Sometimes it is better for a farmer if the milk from their dairy cattle has a high percentage of fat, because milk fat is important in making butter and certain types of cheese. There are many genes that influence milk production. Mutation in one of these has a very strong effect on milk fat.15 This gene controls the last step of making milk fat, and the mutation makes it so the milk is higher in fat. There are other genes which can also affect milk fat, but differences in those genes are not as dramatic.16

Farmers raising beef cattle are interested in producing more meat. Similar to how bone growth is controlled, there are genes which signal muscle to grow and others that signal for it to stop growing. Mutations have been found in a gene that signals for muscle growth to stop.17 These mutations damage the signaling protein and muscle growth continues causing a condition known as double muscling.18 Cattle with two mutant genes are more strongly affected than those carrying only one affected gene. Double muscling is usually considered a disease because these cattle often have serious problems, such as difficulty giving birth. During natural birth, the mother is often injured by the muscular calf she is trying to deliver; there is also a much higher chance of injury or death to the calf. Some cattlemen have been successful raising double muscled cattle, but it requires extra work and many calves have to be delivered by c-section.19

The examples above can help us understand what mutations can do: they introduce a change in a gene. Genes are organized in complex networks which are necessary for proper development and the continuation of life. Changes in these genes can have different effects on the animal depending on where they occur.

There are three examples where one mutant gene may be helpful, but two mutant genes are harmful. Larger sheep, ewes that deliver more lambs, and more muscular cattle can be beneficial to a farmer. However, “spider lambs,” infertile ewes, and cattle so muscular they have serious trouble giving birth are obvious disease problems. So any benefit from these mutations involves a serious cost when the mutation is inherited from both parents.

Two examples appear to be beneficial with no obvious problems: the mutation in Booroola Merinos that increases litter size and the mutation increasing milk fat percentage in dairy cattle. While the extra lambs or milk fat may not be helpful in the wild, they are certainly beneficial in an agricultural setting for a farmer who adequately feeds and cares for his animals.

They change the existing balance found in the complex networks of genes, but do not add to the complexity of the networks.

The one example involving coat color in pigs does not appear to be particularly beneficial to a farmer, but it does add interesting variety. In wild animals, some mutations in this gene do appear to contribute to adaptive coloration. Surprising repeating patterns of mutation found in different mammals suggest designed mechanisms are involved in at least some mutations in this gene.

There is one thing all these mutations have in common. They change the existing balance found in the complex networks of genes, but do not add to the complexity of the networks. To change the number of lambs a ewe has requires starting with a ewe that is capable of reproducing. Similarly, to change the relative amount of bone, muscle, fat, or pigment requires an animal with the complex network of genes capable of producing these in a well-regulated fashion. So these mutations can explain changes, but they do not explain the origin of the complex gene networks.

Mutation in a biblical worldview

The patterns observed above fit very well within a biblical worldview. The Bible tells us of an awesome, wise God who created the world as well as the animals that inhabit it (Genesis 1). This explains the origin of the complex networks of genes that enable life to exist.

While originally the world was very good (Genesis 1:31), things did not stay that way. Soon mankind sinned and brought disease, suffering, and death into the world (Genesis 3). Mutations that result in disease are a reminder that the world was cursed as a result of sin and that we are in need of God to save us.

Even in the midst of a fallen world, God is still the provider and sustainer of life (Psalm 147:8, 9; Matthew 6:25-34; Colossians 1:17). Evidence of this is seen in providential mutations that allow for increased productivity for agriculture, enable adaptation to different environments, and add beauty and variety to what we see in the world. The observations that some genes can handle mutations well and that some mutations appear to result from designed mechanisms are both evidence of God’s providence in our fallen world.