Laboratory scrutiny of pottery shards suggests herders in the pre-desert days of the Sahara* consumed dairy products. Food residue from pottery found at the Takarkori rock shelter in the Libyan Sahara contains animal fats, not only fats from meat but also those from milk. Pottery shards and many cattle bones were dug from the same Holocene (post-Ice Age) layers, confirming the cultural importance of cattle suggested by rock art. Some Saharan rock art emphasizes cows with “full udders,” and some drawings even depict milking.

The proteins and fats embedded in the shards reveal the pots once held not just milk but also butter, cheese, and yogurt.

But in addition to providing a peek into pots from the past, evolutionists point out that humans had to evolve lactose tolerance in order to take advantage of the rich nutritional value of dairy products. It is now widely thought that humans were originally lactose intolerant as adults and that “as dairying spread, so did genes that confer lactose tolerance.” The proteins and fats embedded in the shards reveal the pots once held not just milk but also butter, cheese, and yogurt. Lactose-intolerant people are often able to tolerate fermented dairy products like yogurt and cheese. Nevertheless, lead author Julie Dunne says, “You’re really seeing evolution in action over a very short timescale.”

Human babies, like those of mammalian animals, are born with the ability to digest milk. Lactose, the disaccharide sugar in milk, must be broken down into its simpler components in the small intestine to be absorbed. Lactase, the enzyme that breaks down lactose, is produced by cells lining the small intestine. In premature babies, the gene coding for lactase is sometimes not yet active. And in much of the world’s population, the gene is downregulated after weaning, eventually producing some degree of lactose intolerance. Those whose genes are not downregulated are said to have “lactase persistence.” However, even lactose-intolerant people still have genes coding for lactase enzyme; they are just switched off. 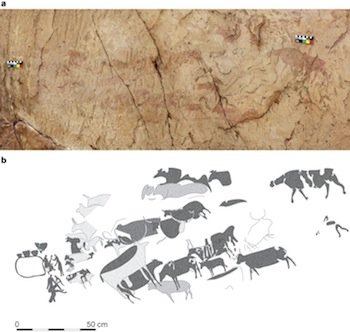 This rock art image and tracing from the Teshuinat II rock shelter in South West Libya show people of the Sahara with cattle and pots. On the left is a cow being milked. Image from Nature.com.

In an adult with lactase persistence, one or both alleles of the lactase gene remain switched on. Because several different genetic variants are associated with the ability to digest lactose after infancy—lactase persistence (LP)—evolutionists consider the appearance of lactose tolerance in scattered populations an example of convergent evolution. Dunne and colleagues say their findings “provide a context for understanding the origins and spread of [not only the European genetic variant but also] other, independently arising LP-associated gene variants in sub-Saharan Africa.”1

While not dangerous, lactose intolerance can result in a loss of some of the nutritional value of milk as well as nausea, bloating, and diarrhea. When undigested lactose passes from the small intestine into the colon, the bacteria living in the colon are able to break down the lactose with consequent excessive production of gas. Symptoms can vary greatly, however, as can the amount of tolerable dairy products, and factors other than genetics are likely involved.

Tracing the geographic spread of dairy products does not reveal “evolution in action.” Mutations responsible for lactase persistence actually represent a loss of genetic information, a shut-down of normal regulation. If anything, the prevalence of lactase persistence is a testimony to the fact an all-knowing Creator designed the human genome with the ability to change.

Although the Bible describes Abraham sharing his dairy products in Genesis 18:8, just a few centuries after the global Flood, it does not tell us when people began drinking milk. Adam and Eve’s lactase genes may have been switched off since there is no necessity for adults to drink milk. But they certainly had lactase-coding genes. A gene expressed in infancy and downregulated later when lactase is not needed is a very efficient arrangement. The regulatory aspect of the lactase gene changes with any of several mutations, allowing for variation in human populations. But no new information is generated. Nothing had to evolve. There is nothing about changes in the on/off switching of an existing functional gene that supports the idea of upward evolution.

*For a biblical and scientific explanation of how the Sahara desert came to be and its connection to Noah’s Flood, see the section “Wet deserts during the Ice Age?” in The Mystery of the Ice Age.