Considering the fact that most fossils are not “in-place”, how often do those that appear to be “in- place” come up that way by chance? Application of the binomial theorem shows that this can often happen. For instance, if an organism has a 50:50 probability of being deposited in life orientation, 4 of 5, or 11 of 15, will end up that way 1% of the time. Since a geologist visits many outcrops, he has a 50% likelihood of encountering one such 1-in-100 assemblage after 70 visits. 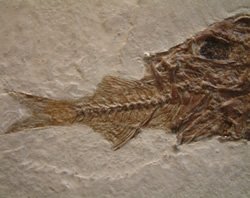 According to standard uniformitarian thinking, marine fossils found in the Phanerozoic record were commonly buried in ancient seas, and a significant fraction of these were entombed in the location and orientation in which they had lived (hereafter “in place”) on the ancient sea bottom. In contrast, given a global Flood causing nearly all of the world’s fossils, one should not expect to find numerous marine fossils in place. Yet such occurrences are commonly cited.

Is another explanation possible? It has long been known that a transported organism may end up buried and then fossilized in life position owing to the fact that the life position is the most hydrodynamically stable orientation (for example, Woodmorappe 1999, p. 85), or even solely by chance. But, while this may account for a single “in-place” fossil, could it ever account for multiple “in-place” ones? Obviously, a combination of hydrodynamic factors and chance must come into play.

Table 1. Probability trials by John Woodmorappe. To facilitate comparison, the probability of success in each situation is set at or near 0.01.

If the density of an organism isn’t uniform, the less-dense half will more likely be deposited upright than the more-dense half. This can be called the “hydrometer effect” or the “fisherman’s bob effect.” A classic example of this phenomenon is uprooted trees getting buried upright in a flood. The trunk and branches are less dense than the root-soil mass.

One must recall that improbable events become increasingly probable when an ever-larger population is sampled. For example, a given individual winning the lottery is extremely improbable, but any member of a large city winning the lottery is not so improbable. Likewise, given the fact that most fossil assemblages are obviously not in place, and the geologist visits many of these before encountering a single “in-place” assemblage, a fortuitous “in-place” assemblage becomes increasingly probable.

A different set of probability calculations were performed to determine the chances of a geologist encountering even one such 0.01 assemblage given (Z) assemblages visited (Table 2).

Up to now, the phenomenon of fortuitous “in-place” organisms has generally been treated haphazardly by researchers, and relegated to an anecdotally-reported situation. Detailed flume-based studies should be conducted on the burial of “in-place” organisms. Such a study should be expanded to assemblages of benthic organisms held together by algae or other normally non-fossilizable material.