The Fossils Say What?

“If the creationists want to impress the Darwinian establishment, it will be no use prating on about what the fossils say!”8 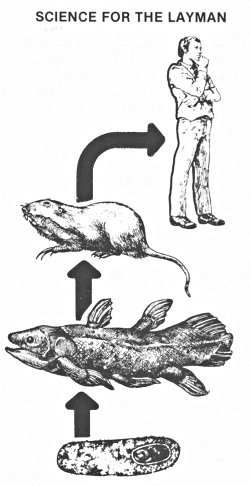 From quotes such as these, one certainly gets the idea that the fossil record is very important to the theory of evolution. However, recent articles indicate a change has occurred in the thinking of some evolutionists. Consider New Scientist, 25 June 1981, in an article entitled “Who doubts Evolution”: “The Evidence for Evolution simply does not depend upon the fossil record.”6

A major source of confusion in analysing the creationist argument is the muddling of the distinction between evolution as fact versus evolution as theory.12

The author later on in the article talks about: “. . . the false idea that the fossil record provides an important part of the evidence that Evolution took place. . . No good Darwinian’s belief in evolution stands on the fossil evidence for gradual evolution so nor will his belief fall by it.”7

This author then, plainly states that the fossil evidence is no longer important—in fact, it doesn’t matter what you find in the fossil record, it will never contradict evolution anyway. The author of the article also has some new advice for creationists: “If the creationists want to impress the Darwinian establishment, it will be no use prating on about what the fossils say.”8

I guess one could conclude that the creationists’ arguments against evolution from the fossil record must have been successful!

Another area where modern evolutionists are changing direction concerns man’s position in the evolutionary scheme of things. Most people have the idea that evolution is an “onward, upward” process. This idea comes from the many evolutionary books that use such terms as “the ladder” of evolution and the man is the “pinnacle” of this process. We see many diagrams of evolutionary “trees” with man at the top. We are told evolution is a gradual change shaped by more or less directional processes.9 Man is usually shown to be the climax of this process as we have been led to believe by authors such as the following: “Sometime about 3,500 million years ago the evolution of life began. Some two million years or so ago, ape man began to evolve into Homo . . . Now man is recognizing that as that as he reshapes the world and replaces the relentless but stabilizing action of physical selection with a new, cultural evolution and inheritance, he is taking control of the future. Therein lies the climax of all the aeons, the epochs and the years.”10 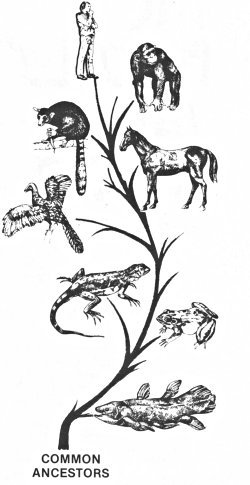 Diagrams typical for this type of understanding of evolution are similar to the one above.

However, all this is revised or redirected in a new anti-creationist filmstrip series produced by evolutionists. In the teachers guide to the programme entitled Science Under Attack, we read:

One common misunderstanding is that evolution involves change “upwards” along some prearranged scale, but the concept includes no such idea. In terms of biology, evolution is simply the idea that species evolve, or change over time, into wholly different species. The question of whether this change is “upwards” or “downwards” is not only irrelevant, it is meaningless.11

This certainly is a turn around, and will provide evolutionary authors with years of rewriting. Nearly all books of evolution are rife with such phrases as “the lower animals,” or “the higher plants” etc. These words “lower” and “higher” are references to this “onward, upward” direction. The diagrams with man at the top will have to be changed to something similar to the one here [this is much the same as the diagram used in the Science Under Attack filmstrip series mentioned above].

Actually, it has always been totally inconsistent for evolutionists to say that man is the pinnacle of this process. In saying this, they have really borrowed the Christian teaching which states that man is the pinnacle of creation. For evolutionists to be consistent, man is no different whatsoever from the animals and there is no reason why he should be at the top of this process even if he was last to get there. I wonder if they will take it to its logical ends, which are seen in the evolutionary religions, where the cow has every right to walk through the kitchen and man is of no more importance than the mosquito. 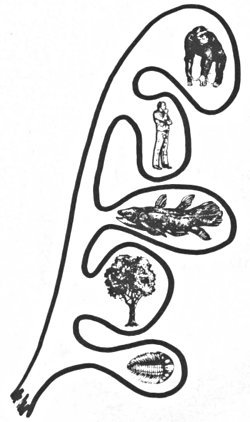 With the “evidence” for Neo-Darwinian evolution crumbling, what are evolutionists saying about their change in direction? The following quote from the Science Under Attack filmstrip series sums it up:

A major source of confusion in analyzing the creationist’s argument is the muddling of the distinction between evolution as fact versus evolution as theory. To begin with, virtually all biologists today agree that the process of evolution is a fact. In the words of Life on Earth, a textbook by Edward O. Wilson of Harvard, Thomas Eisner of Cornell, and others, “Evolution is a fact. It occurs. Biologists have watched and measured its progress at the level of the gene. They have created new species in the laboratory and in the experimental garden . . . [evolution] must be regarded as one of the more firmly grounded and reliable explanatory systems in all of science.”12

At last we are starting to see evolutionists admit the real nature of their philosophy. It doesn’t matter what the evidence shows (e.g., the fossil record), they will believe evolution is fact regardless. As the Neo-Darwinian evolutionary theory crumbles, those who want to cling to an evolutionary philosophy do so no matter what the evidence is. It is not an argument about facts, but a conflict of worldviews—one centered in man: the other centered on the absolute and authoritative Creator God.

It is a fight of mutually exclusive faiths which both provide a solution to the observable problem of man’s guilt. Evolution offers man “freedom” by denying that guilt exists. The Creator God promises to remove guilt if we will only humble ourselves, accept the death of His Son Jesus Christ as just payment for the sin which produces human guilt and then accept His right to be God and serve Him accordingly. Which faith is yours?