The Role of Interpretation in Fish Phylogeny (Part 2)

by John Mackay on May 1, 1980
Share:
Email Using:
Gmail Yahoo! Outlook Other

In a “natural scheme” all facets of an animal’s existence are taken into account-internal and external structure, behavior, etc., before it is classified. 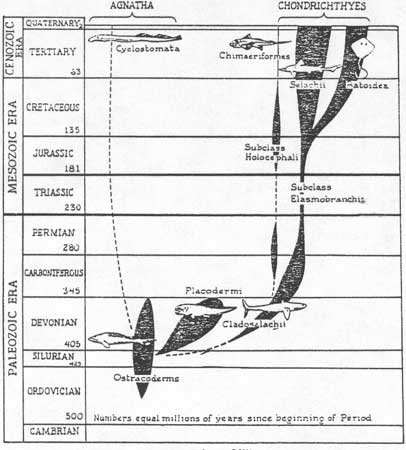 In a “natural scheme” all facets of an animal’s existence are taken into account-internal and external structure, behavior, etc., before it is classified. While this is feasible for living animals, most fossils can only provide us with a fraction of the information required for natural classification. This leads to significant restrictions or limitations on the degree of accuracy we can ever hope to achieve for many fossil classifications. Since we cannot hope to achieve a truly “natural scheme” for fossils, we are limited to an “artificial” type of classification on those often few (and hopefully important) features that have been preserved for our examination.

In recognition of this uncertainty, a new term “paleospecies,” has been introduced to distinguish a fossil species classification from the natural or present-day usage of species. Concerning the nature of paleospecies, Professor Cain from Manchester University states: “The paleospecies is an uncomfortable compromise” . . . between recognition of a fossil’s theoretical relationships and the necessity of incorporation of fragmentary fossil evidence into as natural as possible a system.

In any reconstruction of an animal’s history based on fossil evidence, a minimum of four steps are usually involved. These are:

Only step 1 can ever claim to be free of interpretation.

“What has Psalm 23 got to do with Fish Phylogeny?” A great deal! It brings to light a method of thinking which most of us use, but know nothing about. Consider the first two lines: “The Lord is my shepherd; I shall not want,” and ask yourself what is missing.

Most of you will say, “Nothing is missing.” You are so accustomed to the statement, you are convinced it is self-explanatory. But it most definitely is not! There is a vital piece of information missing which makes Psalm 23 an excellent example of the way in which science most often argues. A scientific argument is often expressed as “The evidence proves the following. . . .” When expressed in these terms most scientific proofs, especially evolutionary ones, are difficult to refute. Most opponents of a “scientific proof” usually fall into the trap of thinking, “Since I cannot find anything wrong with their claim that ‘this evidence proves . . .’ therefore my next best step will be to find new evidence which proves exactly the opposite.” The consequence of this approach is a numbers game where one side is endeavoring to outweigh the proof of the other side. All of this of course (is a burdensome waste of time and) gets you nowhere. It also shows such naive comprehension of the way in which scientific understanding is achieved, that it is tragic.

Psalm 23 illustrates scientific reasoning because it is an enthemyme, or bipartite syllogism; i.e. a statement which really consists of three parts, but has one part missing, either because most people are very familiar with one part of the argument, or the maker of the statement does not want people to be aware of a weakness in part of the argument.

Psalm 23 really reads, “The Lord is my shepherd; (shepherds care, therefore) I shall not want.”

The Jew who has seen sheep and shepherds all his life would very easily understand the two part statement. He would automatically insert the hidden assumption that shepherds care. To the pygmy who has not even seen a sheep the two statements would be meaningless without the third.

Part 2B: What is a scientific argument?

A. Theories and facts, evidence and tests proving things, are the notions common to most people’s understanding of science. They feel that in science, facts suggest theories and theories suggest new facts, to prove or disprove theories. This is a very over-simplified view of science. In the thought process which has made science so successful, we find the following pattern:

Part 2. If my theory B is true, than it is logical to suggest that action X applied to C and D should produce observation E.

Part 3. Action X must be repeated many times to C and D to guarantee that E was not just a coincidence.

B. Part 1 has become known as theorizing or hypothesizing or modelling.

Part 2 has become known as testing or predicting logical consequences.

If we look carefully at Part 1 of the scientific process, i.e. if A is true, therefore B is a good story about C and D, it should be obvious that it is not the facts alone which suggest Theory B. The key factor in this thought process is A, the assumption. A is the idea or belief upon which you base your interpretation of the facts. Facts cannot be interpreted without the aid of an assumption, unless you happen to know all the facts in which case you would not be wasting your time theorizing. The assumption then becomes the starting point or base of your thoughts. Different assumptions will make you see the relationship between facts in a completely different way.

Understanding the assumptions, or the reasons behind the way the facts are put together, is of utmost importance in science, particularly in areas dealing with the origin and history of life. These assumptions are known as your beliefs or your biases. Most of the time, either for convenience or to deliberately hide a weak assumption, a scientific statement is presented in the form, “Statement B is a good theory about the evidence C and D.” That is, it is presented as a two step argument (enthymeme) instead of the three step argument (syllogism) it really is.

The scientific process requires the organization of information to make it useful. Such arrangement will be governed by assumptions. This is evident, for instance, in the arrangement of fossil fish data into families, groups, or kinds. An evolutionist will organize the data on the basis that it will reflect genetic relationship where simple leads to complex through long periods of time. The Biblical creationist will arrange the data to reflect the existence of separate groups or kinds of fishes, as evidence of catastrophic burial, and separate ancestry.

The importance of acknowledging the assumptions used to arrange data is:

(a) If only a limited amount of data is available, it may well be possible to arrange the data to fit all known assumptions.

(c) The Biblical word kind is an assumptive basis upon which to arrange the data. By assumptive, I mean that things exist in kind, because God says so, not because man can observe their existence. Apart from organisms such as Man and Onchypora peripitas where there happen to be only one known species of the type, the existence or kind is often difficult to validate from zoology. God’s guarantee of the existence of kind is the basis for truth whether we can observe it or not. But we must be careful to distinguish what we observe by zoological data to be true and what we accept by faith to be true.

(d) The correct assumption will ultimately be the only one which will continue to be able to incorporate all the known data.

(e) Involved in the assumption that we use to arrange the data, is a picture or "concept" of how the data will look when we have finished arranging it. The fact that we have this picture or concept of the final data, often blinds us to the fact that our arrangement of data is not as close to the concept as is desirable. Our minds simply fill in the gaps and we become careless with data which contradicts our picture. Instead of explaining inconsistencies, we explain them away.

(f) Finally, it is a very rare situation where only one assumption is involved in the arrangement of the data. Usually there will be a second or third assumption involved. The more assumptions you have, the more tentative your conclusions become. It does not make your conclusion wrong, only more difficult to validate. But if you are unaware of the assumptions involved, you cannot validate anything.