Have you ever stopped to think about how much evidence of death surrounded Jesus when He hung on the cross and was later buried in a tomb?

Jerusalem, including the remains of the Old City of Jesus’s day, is built on hard limestone layers known as the Judea Group. On top of these layers are the chalk beds of the Mount Scopus Group, visible to the east on the Mount of Olives. Both these limestone and chalk layers, deposited late in the Flood, are full of marine fossils (Figures 1 and 2). 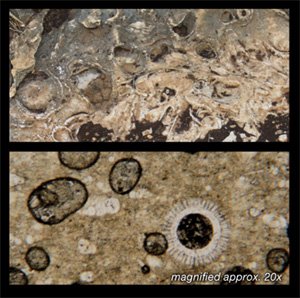 FIGURE 1. Bivalve (mollusk) shells form a vast fossil graveyard that extends across Israel. These shells are clearly visible in the region’s limestone.
FIGURE 2. The chalk layers in Israel, associated with the limestone layers, consist mostly of tiny fossilized shells, or coccolithophores, produced by algae, as seen under a microscope.

In fact, these limestone and chalk layers are enormous fossil graveyards that stretch the entire length and breadth of the land of Israel. This massive destruction and burial of ocean life is testimony to God’s judgment against sin during the global Flood.

On top of these same fossil-filled layers, the Lord Jesus Christ, who was our Creator, gave His life on Calvary’s cross to pay the death penalty for our sin. His broken and blood-stained body was then laid in a grave that was hewn from the same fossil burial ground on which His cross stood.

Jesus’s body was surrounded by the remains of dead creatures that had earlier suffered from God’s judgment during the catastrophic, global Flood. However, He arose bodily from among these fossils, proving that He had satisfied God’s wrath and was victorious over death. Jesus’s resurrection was a foretaste that not only His people, but also His creatures, will one day be liberated forever from the Curse (Romans 8:20–22).