One of the strongest arguments for a young age of the earth is the amount of salt found in the oceans.

Editor’s note: One of the strongest arguments for a young age of the earth is the amount of salt1 found in the oceans. If the world were billions of years old as the evolutionists and progressive creationists insist, there should be so much salt in the oceans that virtually nothing could survive in the enormous amount of salinity.

Scientists have a good idea as to how much salt there is currently in the oceans. They can also calculate the rate in which additional salt enters the oceans; furthermore, because the salt does not leave the oceans very easily (this too can be calculated with some accuracy), the amount of salt in the seas is continually growing. Thus it is not hard to calculate at least a maximum age for the oceans (and hence a maximum age of our planet).

For example, several years ago creation researchers Drs. Steven Austin and Russell Humphreys (both now work at the Institute for Creation Research) calculated that about 450 million tons of sodium dump into the seas every year.2 (A more recent study has shown that salt is entering the oceans even faster than Austin and Humphreys thought,3 which has only enhanced the creationist view of a young age for the oceans.) 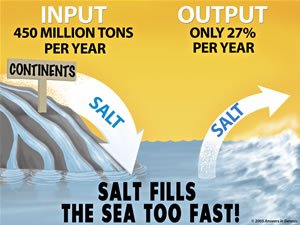 Even if you give old-earth believers some benefits of the doubt and also grant them some very generous assumptions,4 Austin and Humphreys calculated that the ocean had to be less than 62 million years old as a maximum age. They are not saying that this is the age of the oceans. But as an upper limit, it thus could include an earth of about 6,000 years—which is what the Bible teaches.

This powerful evidence of a relatively small amount of salt in the seas gives an age of the earth that is much, much younger than what evolutionists say. If the oceans were billions of years old (as evolutionists claim), then it would have become so salty long ago that virtually nothing would survive in them.

Using assumptions that evolutionists make about the past and uniform rates, the earth is much younger than what they claim. Instead, the Bible is confirmed about its chronology.5

In our web article today, long-time AiG friend Dr. Frank DeRemer of California, who holds a Ph.D. in computer science from the Massachusetts Institute of Technology (MIT), has allowed us to post an email he sent to a friend who works in a highly prestigious research facility, yet as a Christian, believes in a very old age of the earth.

If you want to go more in-depth and study the evidence that Dr. DeRemer is about to present, just use our powerful search engine and then type in some of the key words in any section below that interests you.

Thanks for responding again [about the creationist argument that the amount of salt in the oceans reveals a young age for the earth].

You ask why would God make things look old. But age can be in the eye of the beholder.

When I look at the Grand Canyon, I see evidence of recent massive water flow and far too little erosion of those steep walls for millions of years. And no downstream heap of debris that would result from gradual erosion; instead the debris is presumably spread out all over southern California. I see massive layer shifts of 30 feet or so, which appear to have happened while the layers were still wet—no cracks or evidence that the layers were heated enough to become plastic long after formation.

I see a very recent canyon, with layers laid down by a massive flood, then uplifted while still pliable so no cracks appear then either, and later a canyon cut through by a huge lake backed up by the risen Kaibab Plateau. I don’t see millions of years.

When I hear that the moon is moving slowly away from the earth and that, extrapolating backwards assuming a constant rate, the moon would have been at the surface of the earth 1 (or at most 2) billion years ago, I conclude that the solar system is likely much younger than that.

When I hear that the large planets are losing heat at such fast rates they could not have existed as such a billion years ago, I conclude that our solar system is not as old as the establishment asserts.

When I hear of astronomers calculating that two stars close in appearance in the sky are orders of magnitude different in distance from the earth, but that they are exchanging material, I conclude that the assumptions underlying the measurement techniques are faulty.

When I hear of radiometric techniques resulting in widely varying ages for the same rocks that are ideal for that purpose, I suspect the assumptions underlying the interpretations are invalid. Indeed when the alpha particles escape the parent atom they quickly capture a couple of electrons to become helium, the great escape artist. In a crystalline structure that helium would leak out quickly, so a slow billion years of decay would mean virtually no helium in the crystal, but in fact we find much helium, suggesting youth and significant variations in decay rate in the near past.

Yes, and when I review the data on sea saltiness, even with your critique, I see a very low estimate of the upper limit on the age of the oceans, and you have now conceded that existing data indicates it is not anywhere near steady state so it is likely much younger than billions of years old.

I am reasonably satisfied that because geoscientists have been looking for inputs and outputs since about 1930, it is pretty likely they will not soon stumble on some long overlooked, huge output. But you, as a self-avowed, committed uniformitarian, are desperately looking for such a find. (This is not meant as a mean accusation; just a description of your position as I understand it.)

Of course I could go on and on, but my main point is that you and evolutionists and others who believe more or less in the evolutionary timeline even while rejecting evolution itself, all see age where I and others see youth. The difference is in worldview and underlying assumptions, not in the scientific data.

So why the difference? I believe we both see the Bible as God’s special revelation of Himself to His creatures (humans). I further see that revelation as being via a history of God’s interactions with humans, including His preparation of a “habitat for humanity,” as it were. Each story in the Bible is like an artistic overlay, telling us more about God. After all the overlays are in place, we still have only a finite view of an infinite being, but that is because we are finite beings and that is the best we can do.

I see the Bible as, at the top level, a history with lots of included historical documents: God’s law, Psalms, Proverbs, the words of prophets, letters to churches, etc., all God-breathed. I see Genesis 1–11 as part of the history; indeed, looking at its linguistic and literary aspects, it clearly is history.

The burden of proof that Genesis 1–11 is not narrative history is on the naysayer, and I have not seen any believable such demonstration.

There is no indicator at Genesis 12 that the literary genre is changing—it is all narrative history. And as confirmation, Genesis 1, as well as 2–11, have all the elements that we find in narrative history: point of view, characterization, dialogue, narration framework or glue, plot, and repetition. To me, the burden of proof that Genesis 1–11 is not narrative history is on the naysayer, and I have not seen any believable such demonstration. Even hostile witnesses who are Hebrew scholars assert that it is clear that the author intended the accounts as real history.

Hence, I take Genesis 1–11 seriously—every word. And I find I can both understand it and fancy just-so stories that fit it just as evolutionists can devise just-so stories to try to justify their assumptions. The difference is that, where they assume away God and miracles, I assume that God is the Great Communicator, having designed language, DNA, cells, etc., and I assume He knows how to communicate accurately in language that we can be expected to understand when our minds have not been first plagued with counter-presuppositions. Indeed, I believe that is precisely His intent for His special revelation to us.

We humans can only speculate what might have happened, but God chose to tell us some of it so we would know Him as Creator and Maker, as well as eventually Redeemer and King. He was the only One there and He cannot lie. He faithfully reported the high points of the process and expects us to be curious about the details and to try to deduce them (true science), not come up with an opposing idea that leaves Him out of either the creating or the making.

Indeed, [name withheld], you have said to me that Genesis 1 tells us that God is Creator and the details just distract us from that key fact. In effect, you believe the first verse and disregard verses 2–31, which tell us about God as Maker. You have a Creator but not a Maker! And I deduce that you must also think the plain sense of the Flood story is similarly distracting. Thus, you uniformitarians effectively believe Genesis 1:1 and then Genesis 12 and following, but in smorgasbord fashion, you treat what is between as if it were not there, and certainly as not historical narrative. The result is that you convert Christianity to a two-tier idea: an upper (spiritual) level and a lower (physical reality, historical) level.