Did you ever wonder how instincts are passed down from mothers to their offspring? How can such “knowledge”—crucial for life—transfer through the molecules of a single cell? Despite years of research, scientists still wonder the same thing!

As a newborn infant, how did you know to do the things that you were never taught?

At first that question might strike you as nonsense. Perhaps you’re thinking, “Huh? Babies don’t know anything they didn’t actively learn. We’re all born with a brain that’s a blank slate, and after we’re born, we begin to learn through experiences, through environment, and through lessons taught by others.”

However, the notion that humans (or animals or insects) are born with a brain that is devoid of knowledge, simply waiting for a chance to sponge it up, is incorrect. To draw a rough analogy, a computer can be assembled with every physical component in place down to the last screw, but it can accomplish nothing until information is installed onto its motherboard.

Typically, any computer you buy comes with a basic operating program preinstalled, enabling it to function on an elementary level even though most of its memory is free for additional programs and data.

In a sense, this pre-installation of programming is what the Creator does for human babies (and other creatures). Even before a baby’s birth, God installs into the brain and nervous system a vital “operating system” that helps the newborn to survive.

This “operating system” expresses itself in the form of instincts or instinctive behaviors.

For instance, when you were born, who taught you how to nurse or drink from a bottle—your mother or your father? The answer, of course, is neither. Even a newborn, who weighs less than some laptop computers, comes with “preinstalled programming”—or instincts—to suckle. Without the preprogramming to perform this action, a baby would starve.

A baby wisely accepts the bottle even though he can’t reason that (a) my tummy’s discomfort is caused by hunger, (b) to squelch the hunger I must get some nourishment into my mouth, and (c) this bottle might provide nourishment.

God places in those tiny brains and nervous systems the ability to do many things even before babies understand why to do them.

The same holds true for a baby’s rooting instinct. When you rub a baby’s cheek, mouth, or lips with a bottle, the child’s head turns toward it, and he latches on in order to suckle. The medical community calls rooting a “primitive reflex.”

When any effort at all is made to explain its origin, secular writers typically shrug it off as simply “instinctive” or “hereditary” (which aren’t really answers), or fall back on vague “nature provides a way” explanations.

But regardless of whether you call this “instincts” or “instinctive reflexes,” students of the Bible will see in this preprogramming the wisdom and working of the Creator.

Over the years, scientists have studied many incredible examples of animal instincts. Common examples include birds building nests, kangaroos climbing into their mothers’ pouches to suckle, animals courting, and honeybees dancing to communicate the direction where food is available. 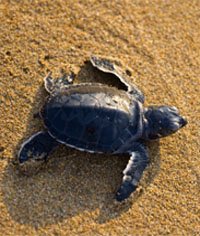 A female sea turtle swims to land to lay her eggs, hides them in the sand, then heads back to sea. When the eggs hatch two months later, mom is gone, but the baby turtles don’t head for the “reasonable” protection of tall grass. Instead they make a beeline for the restless ocean—which is their ideal home even though they don’t know why. Then, rather than stopping at the water’s edge as most creatures would, they plunge in and fight the waves to get pulled out to sea—behavior they never learned! 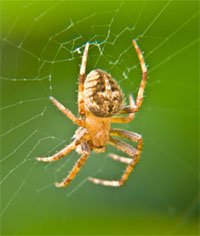 Spiders spin various kinds of silk, some sticky and some not, to perform an impressive array of feats: to catch themselves if they fall, to make nests, to line burrows, and—in this fallen, sin-cursed world—to weave webs to catch insects. Some young spiders even spin “parachute” threads to catch the wind and travel many miles by air. Who teaches spiders how to achieve these feats? Nobody! 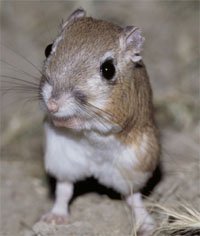 A kangaroo rat instantly (and instinctively) performs an automatic escape jump when it hears the sound of a striking rattlesnake. Is this the result of living and learning? No, because the kangaroo rat performs this lifesaving maneuver even if it has never before encountered a snake.3

Instinct in the Animal World

Why can animals do some of the amazing things they do, especially when they don’t have a model to mimic? Pop this question on the average person, and the most likely answer you’ll get (other than “I don’t know”) will be “instincts.” But of course, this word sheds no light unless you know the source of instincts.

In the early 1900s, biologists assumed that all animal behavior was learned. Later, those assumptions were shaken by the pioneering work of Konrad Lorenz, who in the 1930s demonstrated that newly hatched geese have an instinct to follow whatever creature is present and moving (called imprinting). Under normal circumstances, this God-given preprogramming helps vulnerable goslings to accept their mother as their natural guide and protector.

Interestingly, this instinct can be manipulated. By taking the place of the mother, Lorenz demonstrated that the young birds would automatically follow him, even though he’s a different species. He concluded that this innate behavior (instinct) was a type of preprogrammed learning that served the birds’ own welfare. The behavior could not have been learned, because it was the birds’ first experience.1

The next great experiment was done by Dutch zoologist Nikolaas Tinbergen, who tested whether newly hatched baby turkeys could recognize the silhouette of a bird of prey, even without being taught by their mother.

First, he corralled the tiny poults into a circular pen. Then he “flew” a series of cardboard shapes over the pen. If the silhouette resembled a long neck in front of outstretched wings like a goose, the baby turkeys contentedly ignored it. However, when the card shape was turned around so that it resembled a short neckline followed by wings and then a longer body, like a hawk, Tinbergen reported that the baby turkeys screamed in alarm and ran for their hutch.

Why? Tinbergen concluded that, even without a mother to teach them about danger, implanted inside those tiny skulls was an inborn wiring that the shadow of a long-necked goose soaring overhead presents no threat, whereas a shadow resembling a hawk signals approaching death.2

So, the war was on. Instinct or learned behavior? Further decades of study have produced more questions than answers. The objectivity of Tinbergen’s turkey experiment, for example, has been called into question because it’s too easy for a researcher to read into the young turkey’s reactions—were they really scurrying for cover or just moving around?

His experiments have proved hard to duplicate. Meanwhile, newer, more carefully controlled experiments have indicated that young birds’ heart rates do go up when they see a predatory bird’s shadow, but what does this really show us?

If they are to survive, newly hatched birds must immediately recognize the shadows of portending death. Tinbergen’s classic experiments in 1937 indicated that newly hatched turkeys have a God-given ability to recognize the silhouette of a bird of prey with short necks in contrast to harmless fowl with long necks.

Of course, plenty of behavior in both humans and animals is learned after birth. The point is that creatures appear to be initially equipped with some instinctive behaviors, but each individual’s brain is also wired to acquire new skills in response to the special needs of its unique conditions. (Even imprinting has been shown to be reversible.) How this really takes place is still largely a mystery.

Could instincts be the result of millions of years of evolutionary trial and error? That possibility seems hard to believe in light of the consequences of failure in just one generation.

For example, if baby sea turtles headed en masse for the tall grass rather than the water (as their instinct tells them), that would be the end of the sea turtles, who are easy targets for seabirds and other predators. Furthermore, we still don’t even know with certainty how the information for instincts get stored and passed down to offspring (which all begin life as a single cell, not as a full-sized replica with a working brain!).

No, even something as basic as instincts gives us another glimpse of the Creator’s intelligent, kind, and purposeful thumbprint.

Rick Barry has been involved in full-time Christian ministry to Russia and Eastern Europe for more than 20 years and is currently the director of church planting ministries with Baptist International Evangelistic Ministries. Rick has written over 200 articles and stories for a variety of Christian and secular publications.
Previous Article Created Creature Next Article More Soft Tissue in “Old” Fossils