Blown Away by Design

Michael Denton’s book “Evolution: A Theory in Crisis” has exposed thousands to the overwhelming scientific problems of Darwinian belief.

Dr Michael Denton, M.D., Ph.D. is a molecular biologist at the University of Otago, New Zealand. He is not a biblical creationist. However, his book Evolution: A Theory in Crisis has exposed thousands to the overwhelming scientific problems of Darwinian belief. Though he now describes himself as an “evolutionist”, he is more open-minded than most. He thinks that the design of living things probably implies creative intelligence. He has always been, and still is, adamant that Darwinism “does not give a credible and comprehensive explanation of how the pattern of life on Earth emerged”.

Dr Denton agrees that natural (as well as artificial) selection is capable of generating some change in living things. But he says it is “completely incapable of accounting for the broad picture, the complex adaptations required by the tree of life”.

The two most serious objections he has are as follows:

That is an entirely unsubstantiated belief for which there is not the slightest evidence whatsoever.

First, the nature of mutation (accidental changes in the genetic material of living things). He says that the “essential bedrock of Darwinism” is the belief that “all the organisms which have existed throughout history were generated by the accumulation of entirely undirected mutations”. In his professional opinion, “that is an entirely unsubstantiated belief for which there is not the slightest evidence whatsoever”.

The second problem he sees is that there is “a huge number of highly complex systems in nature which cannot be plausibly accounted for in terms of a gradual build-up of small random mutations”.

Indeed, he says, “in many cases there does not exist in the biological literature even an attempt to explain how these things have come about”. A classic example, he says, is the lung of the bird, which is “unique in being a circulatory lung rather than a bellows lung [see box]. I think it doesn’t require a great deal of profound knowledge of biology to see that for an organ which is so central to the physiology of any higher organism, its drastic modification in that way by a series of small events is almost inconceivable. This is something we can’t throw under the carpet again because, basically, as Darwin said, if any organ can be shown to be incapable of being achieved gradually in little steps, his theory would be totally overthrown.

“The fact is that, in common-sense terms, if you have no axe to grind, there are a vast number of such cases in nature.” Michael Denton, a recognised academic in his field, says that the claim that Darwinian gradualism “can generate the sorts of complex systems we see throughout the biosphere is not only unsubstantiated, but in many cases it is actually beyond the realm of common sense that such things would ever happen”.

The quotations in this article were extracted (with permission) from a video interview available on cassette (NTSC) from Access Research Network, PO Box 38069, Colorado Springs CO 80937–8069, USA. It was then re-checked with Dr Denton to ensure it fairly represented his current views. 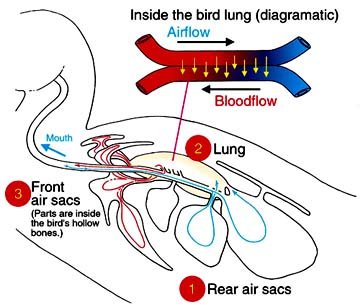 As a bird breathes, air moves into its rear air sacs (1). These then expel the air into the lung (2) and the air flows through the lung into the front air sacs (3). The air is expelled by the front air sacs as the bird breathes out. The lung does not expand and contract as does a reptile’s or mammal’s. The blood which picks up oxygen from the lung flows in the opposite direction to the air so that blood with the lowest oxygen (blue in the diagram always means lower oxygen, red means high oxygen) is exposed to air with the lowest oxygen. The blood with the highest oxygen is exposed to air with an even higher oxygen concentration. This ensures that, in every region of the circulation, the concentration of oxygen in the air is more than that of the blood with which it is in contact. This maximises the efficiency of oxygen transfer from the air to the blood. This is known as counter-current exchange. Such very efficient lungs help birds to handle the energy demands of flight, especially at high altitudes.1

The reptile lung, like ours, has an in-out bellows-like arrangement and does not have the counter-current circulation system.

For a reptile lung to change into a bird lung by small steps, while remaining functional throughout and providing a greater advantage at each step, defies imagination, according to Dr Michael Denton, an open-minded evolutionist.