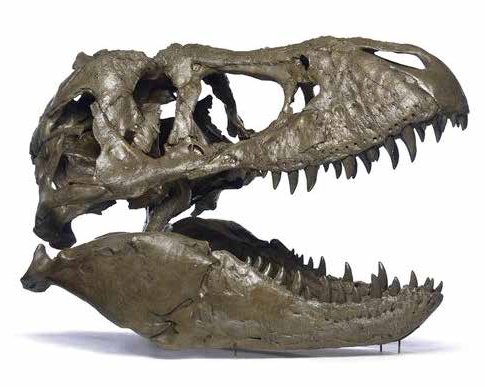 A cast of the T. rex at the Smithsonian Museum of Natural History.

Dinosaurs have become an icon of evolution. Their fossils are probably used more than any other natural phenomenon to help proclaim the evolutionary worldview as if it were true science. As Kirk Johnson, director of the Smithsonian’s Natural History Museum, puts it, “Dinosaurs are the gateway drug to science for kids.”

That’s why Johnson is so excited about the addition of an impressive 38-foot-long T. rex skeleton loaned to the Smithsonian collection.1 It is one of the first exhibits in a $48 million makeover of the museum’s dinosaur hall (scheduled to open in 2019), and it will present the evolutionary story that this creature died 66 million years ago.

Since 1997 when it lost the bid for “Sue,” the most famous T. rex fossil ever found, the Smithsonian has displayed a life-size replica of “Stan,” a less impressive T. rex fossil unearthed in 1987. But Smithsonian officials recognize that a cast, no matter how realistic, is no replacement for the real thing. Johnson even said that for the Smithsonian not to have a real T. rex was “unforgivable.”

“Dinosaurs are the gateway drug to science for kids.”

Secularists see dinosaur fossils as proof of evolution that “confounds” creationists. Television commentator Rachel Maddow used that word recently when she lamented the donation of a world-class Allosaurus skeleton (resembling a T. rex) to the Creation Museum last May.2 But to the consternation of evolutionists, biblical creationists have been increasingly adopting dinosaurs as their own mascot.

It doesn’t take much to understand why creationists love dinosaurs. Their fossils are found in continent-wide layers of sedimentary rock, in positions that indicate rapid and violent burial. Such conditions are exactly what we would expect to be the case in the worldwide Flood of Noah’s day. Furthermore, evidence, such as still-pliable soft tissues and intact bone cells, has been mounting in recent years and further revealing that dinosaur remains cannot be as old as the evolutionary timeline purports.

So biblical creationists happily employ these regal giants as an effective teaching tool to proclaim the biblical view of earth history.

Previous Article A Wave of New Genesis Readers Next Article Cartoon: Let There Be Truth