If these scientists shopped at a typical grocery store, they couldn’t do their experiments. Apparently, they looked for chickens with their necks where they should be, and even with their heads still attached, and took pictures of them after pushing their necks around to various stages. Sound a bit macabre?

To be fair, they were taking x-rays, not normal pictures, and they were then measuring the angles of the vertebrae connections at the various positions. Why, you ask? Because they think chickens are living (well, dead for the experiments) dinosaurs. They were hoping for insight into why so many fossilized dinosaurs are buried in rock appearing to be in what’s been called the “throes of death”—called the opisthotonic posture—with the long neck extended unnaturally toward the animal’s back.

But this isn’t the first time scientists have dabbled in dead dinosaurs, er, chickens. Back in 2011, Dr. Elizabeth Mitchell talked about a similar study where dead chickens were dunked in freshwater and observed to have the trademark neck recoil, apparently in response to the immersion. This has been observed in other studies as well. Of course this makes sense with a biblical Flood burial. But the action of the violent floodwaters, we would argue, is probably more the culprit.

Going Above and Beyond to Deny the Possibility of Water Currents?

Ironically, the report on the newer study says, “Others have attributed the pose to shrinking neck ligaments after death, or (not very convincingly) to water currents twisting the bodies around,” despite the actual study having nothing to do with water. Where did that statement about water currents come from, and who wasn’t convinced? 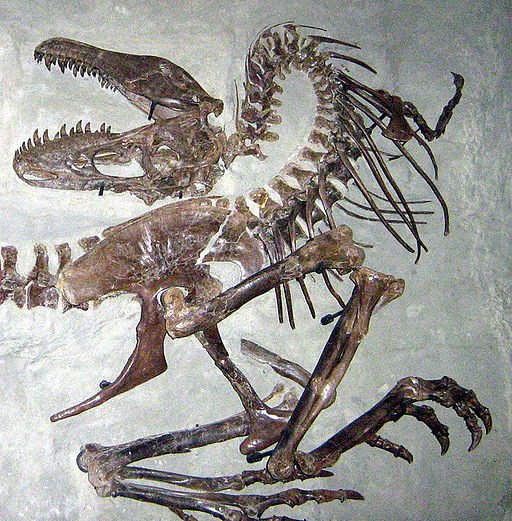 Gorgosaurus fossil with opisthotonic posture. By Traumador the Tyrannosaur (Peter and the Albertosaurus) [CC BY 2.0 (http://creativecommons.org/licenses/by/2.0)], via Wikimedia Commons

The study being reported on talked primarily about how bird anatomy facilitated the pose, not so much other processes such as water currents that could also be involved. In fact, the study states that the posture “can, in chickens at least, be facilitated simply through the limpness associated with death combined with the imposition of a relatively modest displacing force.” They continue, saying, “it is likely that the various configurations are related to the enormous diversity of causes of death coupled with the circumstances experienced immediately upon death, and relatively shortly thereafter” (emphases added). Water deposition wasn’t exactly ruled out by these scientists!

The Biblical Perspective of the Chicken Study

Nothing in the actual study goes against what we’d say from the Bible. Chickens have very flexible necks—particularly allowing them to be pushed backwards. The measured angles of the individual backbone connections were obtained through tests in the here and now and are likely repeatable—if you have a grocer to accommodate you! The reason they suggest that fossilized animals are found in these positions is due to their anatomy and the conditions prevalent surrounding their death.

The only issue we’d have is these scientists assuming (because of their evolutionary beliefs) that chickens are related to dinosaurs. Creationists believe birds (chickens) weren’t even created on the same day as dinosaurs, according to Genesis. Birds were created on Day Five and land animals on Day Six. And from a biblical model of origins, birds came before dinosaurs, not afterwards as evolutionists teach. Dinosaur vertebrae are different from chickens’; however, it may be that there are enough similarities for this flexibility issue to be relevant to some varieties of dinosaurs with comparable neck-to-body lengths. And, of course, we’ll write off that comment against water currents in the news source as journalistic bias.

Previous Article What If Dinosaurs Really Had Feathers? Next Article Finding Noah: An Adventure of Faith