Photo by Poleta33, via Wikimedia Commons. 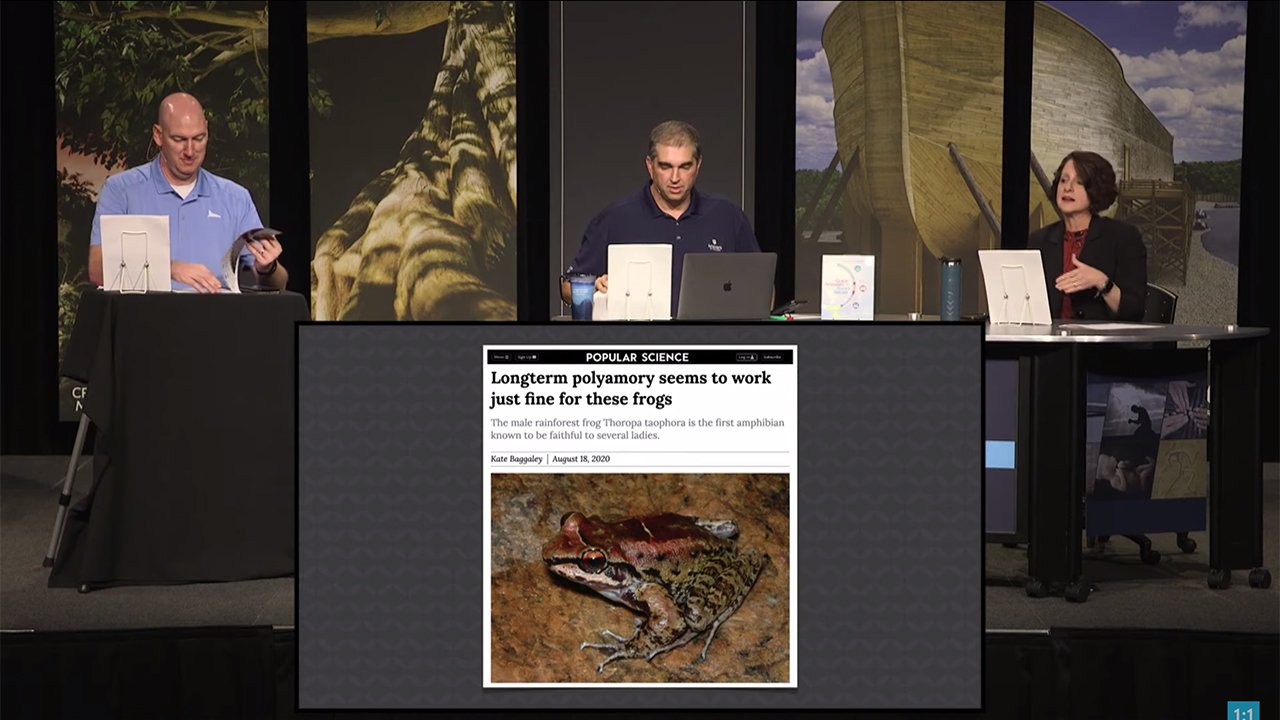 Last summer I wrote a blog about so-called “gender-fluid tomatoes.” These were Australian tomatoes that have a strange reproductive strategy that some were saying showed that the “sexual binary [of male and female]” is a “fallacy,” which is an utterly ridiculous argument. Well, now it’s frogs making the news for their reproductive strategy, with the headline, “Longterm polyamory seems to work just fine for these frogs.”

According to a new study, rainforest frogs (Thoropa taophora) are the first known amphibians where the male forms a “lasting relationship” with more than one female. (Many other animals, such as lions, do this, but this the first time this behavior has been observed in amphibians.) In this reproductive strategy, a male has two or three mates for which he will defend their eggs (including from some of the cannibalistic mothers!). This helps the species survive in their particular environment.

If you read a little between the lines in the article, the popular science author’s choice of clever wording, euphemisms, and figures of speech is subtly making a point—maybe these frogs aren’t so different from us.

Now, unlike the tomato study, I didn’t see either the study’s authors or the popular science article’s authors explicitly argue that so-called “polyamorous” frogs have anything to do with the morality of such relationships among humans. But the keyword in my previous sentence is explicitly—if you read a little between the lines in the article, the popular science author’s choice of clever wording, euphemisms, and figures of speech is subtly making a point—maybe these frogs aren’t so different from us. Terms like polyamory aren’t routinely applied to the animal kingdom—they are used for human relationships. By appropriating that term for these frogs, the author is oh-so-subtly suggesting polyamory is natural. After all, animals do it, they would argue!

But what I said about so-called “gender-fluid tomatoes” applies to this idea as well: “morality is not determined by looking at the plant or animal kingdom [which is a good thing because these frogs also eat their own unhatched tadpoles!] . . . Morality comes from God and his Word. It’s the only unchanging foundation. Anything else—including nature as a supposed moral compass or example of moral norms—is just an arbitrary opinion.” And God’s Word is abundantly clear when it comes to humans and our sexuality: sexual expression and relationships are reserved for one man and one woman within the covenant relationship of marriage (Genesis 1:27 and 2:24; Matthew 19:4–5).

Only humans were created in God’s image.

Only humans were created in God’s image. Human beings, not animals, are sinners—after all, God gave the first human Adam an instruction, which he disobeyed (Genesis 3). Only humans are instructed that marriage is one man and one woman. Only humans are told that adultery, fornication, and homosexual behavior are sin. But of course for those who believe in evolution, humans are just another animal and related to all animals (and even plants). And this is what generations of kids are taught in much of the public education system. To use frogs to justify polyamory is actually being consistent for those holding the religion of evolutionary naturalism. But from a Christian perspective, it’s absurd, of course.

This item was discussed yesterday on Answers News with cohosts Tim Chaffey, Dr. Jennifer Rivera, and Roger Patterson. Answers News is our weekly news program conducted here at the Creation Museum and broadcast on my Facebook page and the Answers in Genesis Facebook page. We also covered the following topics:

Watch the entire episode of Answers News for October 7, 2020.