Disney has been in the news a lot lately over promoting the LGBTQ worldview publicly, at its attractions, and increasingly through various Disney movies and other programming. A member of the Disney family (who was born a female) publicly stated they were transgender and came against a bill the governor of Florida approved. The bill was designed to protect young children in public schools from being taught explicit material.

Disney was once seen by millions of people as being child-friendly and a trusted company for entertainment for their children. But Disney’s recent actions have greatly tarnished its once family-friendly image, and the backlash against the company continues to grow.

For instance, consider the results of this survey by the Trafalgar Group:

News reports reveal Disney is focusing on creating content to expose young children to sexual ideas. Does this make you more or less likely to do business with Disney?

How likely are you to support family-friendly alternatives to Disney? 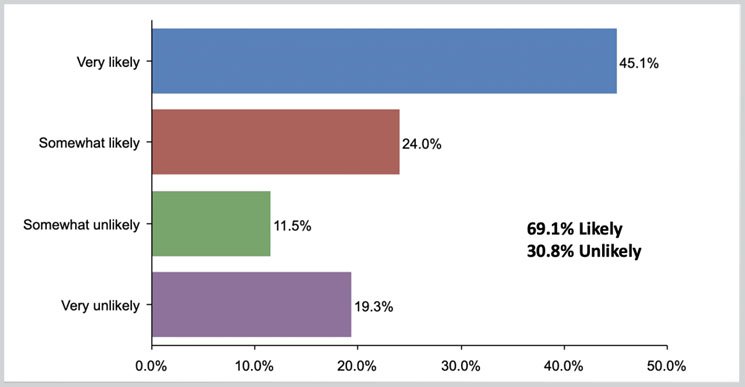 Survey results from the Trafalgar Group.

I have heard from many families who said they are no longer going to visit Disney or use Disney programs and will now come to the Ark Encounter and Creation Museum and use Answers in Genesis resources (e.g., Answers TV streaming platform) instead. These are the two leading Christian-themed attractions in the world.

Parents have also told me the state of the culture has made them realize how important it is to pass on a godly legacy to the coming generations. After all, where we spend eternity is a vital issue. There’s nothing more important than trusting Christ for salvation and knowing we will spend eternity with our Creator and Savior, the Lord Jesus Christ.

Yes, one can have some (very costly) fun at parks like Disney, but these places are increasingly pushing a very secular anti-God agenda onto people. At the Creation Museum and Ark Encounter, families can have a lot of fun (there’s so much to do at both attractions for all ages) but also learn the truth of God’s Word and be impacted for eternity by the saving gospel at the same time—a different agenda to the world.

At many Disney parks around the world, Main Street is well known as the first themed area that people walk through. It’s like an introduction to the park. But now it’s really become symbolic of being an introduction to a pro-LGBTQ-driven agenda! “The highway of the upright turns aside from evil; whoever guards his way preserves his life” (Proverbs 16:17).

We don’t have a “Main Street” at the Ark Encounter or Creation Museum, but these world-class attractions—through hundreds of exhibits, varied programming, zoos, VR experience, planetarium, 4D theater, and much more—direct people of all ages to “God’s Highway”—the highway to heaven! That’s the most important highway there is. We want to stay on the “narrow road” and avoid the“broad road” to destruction that “Main Street” represents.

If you’re planning a visit to the Creation Museum, you couldn’t have picked a better time! Our most recent renovation is Legacy Hall, our beautiful 1,000-seat auditorium.

Legacy Hall was originally a warehouse, converted in 2011 to a busy auditorium as we quickly grew. Over the next eleven years, it hosted hundreds of speakers, concerts, and banquets. Last fall, we began a major reconstruction, changing virtually everything to transform the space into a much more artistically pleasing and functional area. We are excited to announce that Legacy Hall reopened on April 24, and it’s amazing!

We are especially pleased to have state-of-the-art equipment and new seating that make the guest experience better than ever. State-of-the-art acoustics yield a high-fidelity audio experience across the entire hall. That, combined with exceptional soundproofing, means that you will enjoy your time even more as you become fully immersed in the experience. Guests will enjoy musical concerts where they may find themselves clapping and singing along while making family memories.

With a new full-color lighting system and two extremely bright laser projectors, Legacy Hall is a great place to take a break from walking around the faith-affirming Creation Museum.

Learn from one of our dynamic speakers, watch an award-winning video, or escape into one of our enthralling live dramas. The new LED video wall is 34 feet wide and 17 feet tall with pristine 4K resolution that will help the distractions of life fade away—at least for a while.

We hope to see you at the Creation Museum and that you’ll take time to experience the vastly enhanced Legacy Hall.

The Bible is historically accurate in every event that it addresses. The Biblical Authority Room at the Creation Museum highlights a few figures from Scripture, and each figure displays support from the biblical record along with archaeological support.

Jesus Christ is the central figure of the Bible. He taught along the road to Emmaus, and “beginning with Moses and all the Prophets, he interpreted to them in all the Scriptures the things concerning himself” (Luke 24:27).

The New Testament teaches that Jesus is the only begotten and eternal Son of God, fully God and fully man. He is the promised Messiah. He lived a sinless life and died as a sacrifice to pay the penalty for our sins (as Isaiah and Daniel both prophesied). Three days later, Jesus rose from the dead, demonstrating his power over death and showing the Father’s acceptance of his sacrifice. He appeared to over 500 people over the next 40 days before ascending into heaven. He will come again to reward those who believe in him and judge the wicked.

Despite the irrefutable fact that he is the most influential person in history, some skeptics deny the historicity of Jesus. They argue against using the Bible as a source of reliable information, clearly showing their own bias. We can have absolute confidence that Jesus existed because God’s Word states that he did.