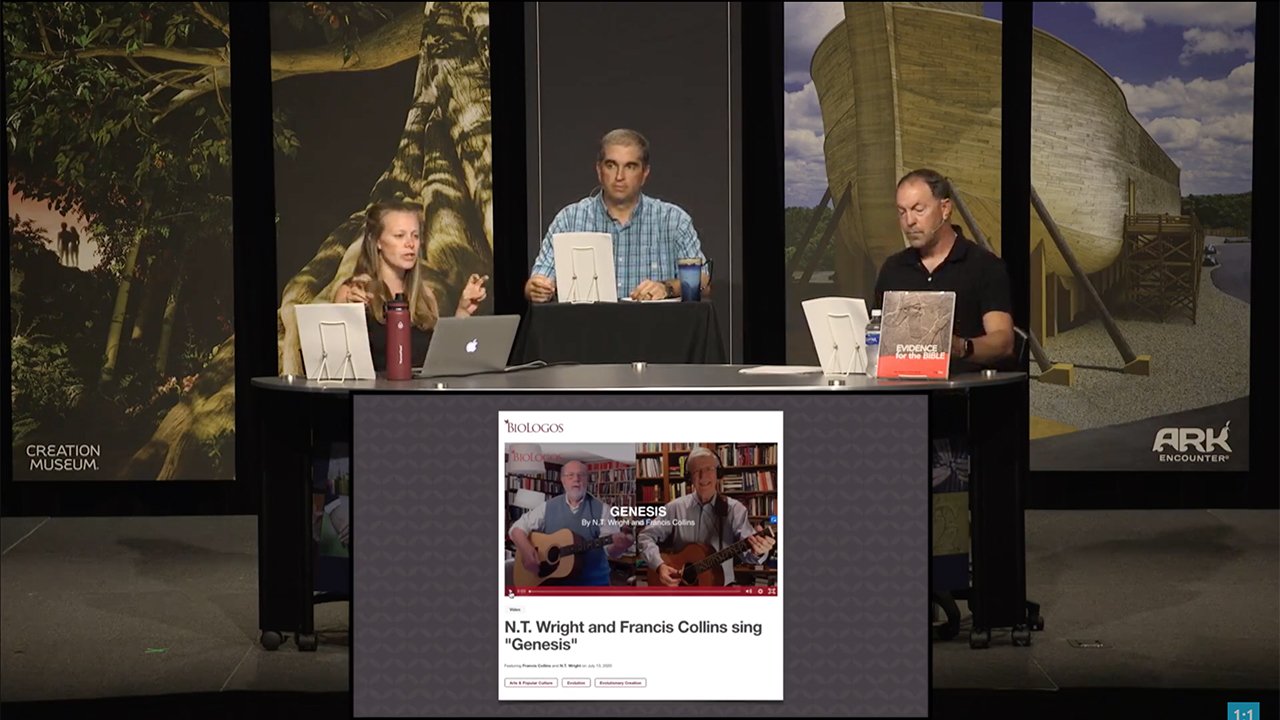 If someone told you, “Oh, I believe in Genesis,” would you assume they likely meant that they believe Genesis is history, written and inspired by God, and an eyewitness account of creation and the early events of history? Well, BioLogos (the leading “evolutionary creation” group) recently released a video titled “Genesis” that says, “Oh, I believe in Genesis,” while they demonstrate that they don’t actually believe in Genesis. Now, keep in mind the mission of BioLogos is to infiltrate churches and all Christian institutions (e.g., colleges) to try to get everyone to believe evolution!

This song is a rendition of Yesterday, a popular song from The Beatles released in 1965. The BioLogos song was written and performed by New Testament scholar N.T. Wright and geneticist and director of the National Institutes of Health, Dr. Francis Collins. I’ve put the lyrics below in italics, with some commentary.

Genesis. Earth and heaven in a cosmic kiss. Evolution must have been like this. Oh, I believe in Genesis.

At the very beginning, the songwriters reveal that they believe in evolution. Genesis and evolution simply don’t go together—the biblical account of creation (which isn’t just taught in Genesis—it’s confirmed throughout Scripture) and the naturalistic explanation for the existence of earth, life, and the universe are utterly opposed to one another.

Here are just a few examples why:

Genesis and evolution don’t go together!

Genesis and evolution don’t go together! So if someone says they “believe in Genesis,” but they also believe in evolution, then they don’t really believe in Genesis. They’ve taken man’s ideas from outside Scripture and added them into the Bible. Millions of years and evolution don’t come from the Bible—they come from the mind of fallen man, and N.T. Wright, Francis Collins, and others are using those ideas to interpret Scripture. Really, they’re setting themselves up as the authority over God and his Word, and they are a blight on the church.

It would appear that by singing “DNA, shaping creatures from the dust and clay” that DNA—not God—is doing the work of creation. This would be consistent with an evolutionary worldview in which DNA (the molecule of heredity) is supposedly responsible for all the life we have today. This idea is, quite frankly, blasphemous. It steals the glory that belongs to God—and God alone—for what he has created. DNA didn’t create creatures. God created DNA (an incredibly complex information system) when he created life.

How he made it all, fourteen billion years ago.

I would urge Wright and Collins to read Genesis 1 and then pair it with Exodus 20:11,

For in six days the Lord made heaven and earth, the sea, and all that is in them, and rested on the seventh day.

God created in six days—not in millions of years. And Jesus affirmed this in Matthew 19:4–5 when he was asked about marriage,

He answered, “Have you not read that he who created them from the beginning made them male and female, and said, ‘Therefore a man shall leave his father and his mother and hold fast to his wife, and the two shall become one flesh’?” [emphasis added]

Jesus said Adam and Eve were created at the beginning of creation, not millions and billions of years after it.

Wisdom, grace, and love, for he spoke and it was so.

To say that God used evolution to create and then to sing this line is incredibly inconsistent . . . and hypocritical. An all-wise Creator doesn’t use the inept, bumbling process of trial-and-error (and death, bloodshed, and disease) that is evolution to create. Instead, he speaks and it is so. And not how Wright and Collins mean when they sing “for he spoke and it was so”—they mean God spoke and over billions of years, natural processes, guided by God, bumbled about creating life on earth as millions of creatures that didn’t quite turn out died out, dying and suffering, killing and eating, paving the way for new, more advanced lifeforms to emerge. No, when the all-wise, all-powerful Creator speaks—it really is so, just as it says in Genesis.

They sing that God is grace and love, but they are really attributing millions of years of death, suffering, disease, and bloodshed to God.

They sing that God is grace and love, but they are really attributing millions of years of death, suffering, disease, and bloodshed to God. By saying God used evolution, they are really saying God—not our sin (which is what the Bible teaches)—is the author of death and the brokenness of creation. That’s not the loving and gracious God of the Bible! God sent his Son to pay for this brokenness and rescue us from the mess we caused because of our sin in Adam.

Genesis. Eve and Adam in a world of bliss. In the paradise we all now miss. Oh, I believe in Genesis.

Genesis describes the paradise of Eden as the first home for humanity—before Adam and Eve’s sin broke creation. But in Wright and Collins’ view, Adam and Eve are standing on layers of sediment filled with fossils (the remains of dead things). This means, in the evolutionary view, they are standing on the evidence for millions of years of death, suffering, disease, and bloodshed. How’s that for a “bliss” that we miss? What kind of paradise is that?

In a trice, didn’t listen to divine advice. Einstein wondered whether God played dice. Now we’re trapped within a world of vice. Why they had to fall, I don’t know; it doesn’t say. They did something wrong, and we long for God’s new day.

Now, I understand they were trying to rhyme “trice,” so perhaps that’s why they chose the phrase “divine advice.” But even if you’re rhyming, you need to choose words that are theologically accurate, and that is not a theologically accurate statement. God didn’t say “it’s best if you stay away from that one tree.” It wasn’t a piece of advice Adam and Eve probably should have followed. It was a divine command that was to be obeyed. They sinned against God, not by spurning his advice but by rebelling against his command.

As for the line “Why they had to fall; it doesn’t say,” it does: “so when the woman saw that the tree was good for food, and that it was a delight to the eyes, and that the tree was to be desired to make one wise, she took of its fruit and ate, and she also gave some to her husband who was with her, and he ate” (Genesis 3:6). Adam and Eve fell because they were tempted into sin and chose rebellion instead of obedience to their Creator.

Genesis. Royal priesthood in a holy bliss. New Jerusalem will be like this. Oh, I believe in Genesis.

What will the New Jerusalem be like? Well, if God is going to restore things back to how they were in the beginning, then to be consistent, Wright and Collins should be singing about looking forward to a future of death, bloodshed, violence, disease, and suffering just as it’s been for millions of years. But of course they don’t because they are inconsistent in their theology!

Sadly, BioLogos and those affiliated with them are leading Christians into error. Wright and Collins need to repent of their compromise with the pagan religion of the day, repent of not believing God’s Word, and repent of encouraging others to compromise God’s Word. They may sing, “Oh, I believe in Genesis,” but what they really mean is, “Oh, I believe in man’s ideas about the past and have added them into Genesis.” They would do well to heed God’s Word, “let God be true but every man a liar” (Romans 3:4 NKJV).

This item was discussed today on Answers News with cohosts Avery Foley, Bodie Hodge, and Roger Patterson. Answers News is our weekly news program filmed live before a studio audience here at the Creation Museum and broadcast on my Facebook page and the Answers in Genesis Facebook page. We also covered the following topics: