A gunman opens fire in a Connecticut elementary school, killing 20 children. An abortionist in Philadelphia is convicted of gruesome infanticide. The Supreme Court strikes down a section of the Defense of Marriage Act defining marriage as only between a man and a woman. A memorial vigil is held for a dead elk in Colorado, but when an abortion-restricting bill is considered in the Texas Senate, an angry mob chants, “Hail, Satan.”

These are the days we live in—eerily similar to the days of Noah when “the Lord saw that the wickedness of man was great in the earth, and that every intent of the thoughts of his heart was only evil continually” (Genesis 6:5).

At the Answers Mega Conference in July, Ken Ham addressed the spiritual state of the nation in his talk titled “The Great Delusion,” which you can watch for free on this page or share through YouTube. 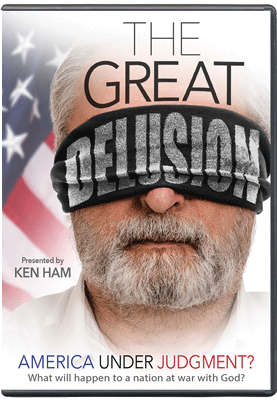 Get the DVD today!

In the video Ken compares our generation to the one described in 2 Thessalonians 2, deceived “because they did not receive the love of the truth, that they might be saved. And for this reason God will send them strong delusion, that they should believe the lie, that they all may be condemned who did not believe the truth but had pleasure in unrighteousness” (2 Thessalonians 2:10–12).

The lie Satan has especially spread in our age is the lie of evolution and millions of years, which implies that God’s Word is wrong and that man’s ideas are more reliable.

Sadly, this delusion has affected the church. When the culture began pulling away from biblical moorings in Genesis, the response of many Christian leaders was to jump aboard the drifting ship. Rather than staying anchored to the solid ground of biblical authority, they compromised with man’s ideas of millions of years. Tossed and turned by the waves of relativism, our current course is leading to shipwreck unless we turn back to the safe harbor of biblical truth.

Ken shows from Romans 1:18–32 that our culture is not only in danger of God’s future judgment, but our nation and the Western world is already under His wrath “against all ungodliness and unrighteousness of men, who suppress the truth in unrighteousness.” Because people worshipped the creature rather than the Creator, God gave them up in judgment to the ravages of sin: “vile passions” of homosexuality and a “debased mind” that plunges people into the evils listed in verses 28–31.

Romans 1:32 says that though people know they deserve God’s judgment for such evil, they not only practice these sinful behaviors but also “approve of those who practice them.” Sadly, at the top of those approving what God’s Word calls sin is the President of the United States.

President Obama has championed the so-called rights of gays and lesbians in “every institution and walk of life.” He celebrated Roe v. Wade as affirming “every woman’s fundamental constitutional right to choose whether to have an abortion.”

God is the one who sets up leaders, and their hearts are in His hand (Daniel 2:21; Proverbs 21:1). So how should Christians respond to being in a nation under God’s judgment with a leader apparently placed in charge for our judgment? The Christian is called to honor and be subject to governing authorities, recognizing that their authority comes from God (Romans 13:1–7).

The solution to the culture’s delusion and disintegration is not political activism or social outreach or isolationism. The answer is only found in the life-transforming power of the gospel. This gospel can be trusted because it comes from God’s Word, which is inerrant from its very beginning.

Answers in Genesis seeks to equip God’s people to defend His Word as truth—“to contend earnestly for the faith” (Jude 3). As Noah was a “preacher of righteousness” (2 Peter 2:5), Christians today should be warning their neighbors of coming judgment and sharing the gospel as the one way of salvation.

As Christians proclaim the truths of the gospel and people’s hearts and minds are transformed through repentance, they will act and think in accordance with God’s Word (Romans 12:1–2). As more and more come to faith in Christ, the culture can be transformed into one where righteousness is the standard rather than every man doing what is right in his own eyes (Judges 21:25). Our hope is in Christ and His glorious gospel.