On September 6, 1620, a group of courageous pilgrims set sail in the Mayflower from Plymouth, England, bound for the New World with the primary purpose of establishing a colony where they could freely practice their religious beliefs. They anchored in Provincetown Harbor of Cape Cod on November 21, 1620, and after exploring the cape, they settled on the coast at Plymouth (in present-day Massachusetts).1 On the day they anchored, they wrote and signed a compact declaring their purpose and how their civil government would function. The modernized text of the main body of the 1620 Mayflower Compact reads as follows:

Having undertaken, for the glory of God, and advancement of the Christian faith, and honor of our King and Country, a voyage to plant the first colony in the northern parts of Virginia, do by these presents solemnly and mutually, in the presence of God, and one of another, covenant and combine our selves together into a civil body politic, for our better ordering and preservation and furtherance of the ends aforesaid; and by virtue hereof to enact, constitute, and frame such just and equal laws, ordinances, acts, constitutions and offices, from time to time, as shall be thought most meet and convenient for the general good of the Colony, unto which we promise all due submission and obedience.2 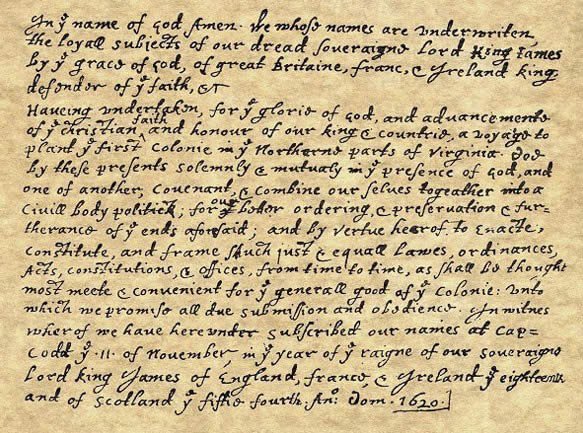 The Mayflower Compact was the first governing document of Plymouth Colony. It was drafted by the Pilgrims who crossed the Atlantic aboard the Mayflower, seeking religious freedom. It was signed on November 11, 1620 (OS) in what is now Provincetown Harbor near Cape Cod. Image courtesy of Wikimedia Commons, http://commons.wikimedia.org/wiki/File:Mayflowercomp.jpg.

It was clear from the Compact that their faith played an extremely important part of their lives, and that they desired to establish and spread the Christian faith in their new homeland. The Pilgrims recognized that they needed to occasionally set aside days for commemorating the Providence of God. In 1668, the Plymouth Colony Court decreed the following:

Taking notice of the goodness of God to us in the continuance of our civil and religious liberties, the general health that we have enjoyed, and that it has pleased God in some comfortable measure to bless us in the fruits of the earth . . . do propose unto the several congregations of this government, that the 25th day of November next, which will be the fourth day of the week, to be kept as a solemn day of thanksgiving.3

It is evident that Christianity significantly influenced every aspect of colonial life and was at the heart of many of the laws which were to govern colonial and later American society. The Charter of Rhode Island in 1663 makes this point clear as seen in this excerpt:

And whereas, in their humble address, they have freely declared, that it is much on their hearts (if they may be permitted) to hold forth a lively experiment, that a most flourishing civil state may stand and best be maintained, and that among our English subjects, with a full liberty in religious concernments and that true piety rightly grounded upon gospel principles, will give the best and greatest security to sovereignty, and will lay in the hearts of men the strongest obligations to true loyalty. Now, know ye, that we, being willing to encourage the hopeful undertaking of our said loyal and loving subjects, and to secure them in the free exercise and enjoyment of all their civil and religious rights, appertaining to them, as our loving subjects and to preserve unto them that liberty, in the true Christian faith and worship of God, which they have sought with so much travail, and with peaceable minds, and loyal subjection to our royal progenitors and ourselves, to enjoy.4

These early Pilgrims and American colonists plainly stated that Christianity was good for ordering the civic structure, maintaining equitable law, preserving civil and religious liberties, and beneficial (indeed foundational) for public morality. Far from compartmentalizing society into secular duties and religious responsibilities, the Pilgrims and other early colonists recognized that for a government of any kind (colony, state, or federal) to function properly and flourish, there needed to be a Christian moral backbone to the laws which regulated society. These colonial founders recognized that it was the Christian morality behind the laws, not the laws themselves, which would order and preserve society.

For example the 1778 South Carolina State Constitution in Article 38 declares the following:

1st. That there is one eternal God, and a future state of rewards and punishments.

2d. That God is publicly to be worshipped.

3d. That the Christian religion is the true religion

4th. That the holy scriptures of the Old and New Testaments are of divine inspiration, and are the rule of faith and practice.

5th. That it is lawful and the duty of every man being thereunto called by those that govern, to bear witness to the truth.5

Christianity played a vital role in everyday life and the political direction of the Colonies and the early United States.

These brief quotes of documents instrumental to the founding of America are just a few of the many on record. They plainly testify that America was founded on Christian principles—not just some vague Deism—and indeed Christianity played a vital role in everyday life and the political direction of the Colonies and the early United States.

But we now live in an American society which is suppressing the name of God in any public arena, removing the 10 Commandments from courthouses, forcing the removal of nativity scenes from public places (and even lawsuits brought against privately-owned nativity scenes), and even trying to suppress what Christian ministers can say in the pulpits of their own churches. This is not the freedom of religion that is talked about in every state’s constitution and the Bill of Rights in the US Constitution. Prohibition of religious worship in private and public settings would have been the furthest thing from the minds of the Pilgrims and other early colonists. Indeed, the First Amendment to the US Constitution was patterned after the Virginia Declaration of Rights of 1776 section 16:

That religion, or the duty which we owe to our Creator, and the manner of discharging it, can be directed only by reason and conviction, not by force or violence; and therefore all men are equally entitled to the free exercise of religion, according to the dictates of conscience; and that it is the mutual duty of all to practise Christian forbearance, love, and charity toward each other.6

It is ironic that in the name of tolerance and equity, we have not only moved away from what the founders of this country intended, but we have completely turned 180 degrees. As we have detailed in recent blog posts and articles, the US government is now trying to force ministers to violate their Christian convictions and conscience and make them perform homosexual marriages, hire people who may be opposed to and even hostile to their religion, and provide abortifacients to employees against the dictates of their faith. These actions directly violate the letter and intent of the First Amendment. Buttressed by revisionist history, modern America has reinterpreted the Christian foundation upon which this country was built.