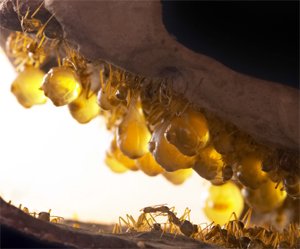 “Are you sure you won’t have some more?”

“Is there any more?”

Like Winnie-the-Pooh at Rabbit’s house, honeypot ants gorge until they can’t leave the nest. And like Rabbit in the story, worker ants just keep on feeding them until there isn’t any more.

But these ants don’t have to diet because they can’t resist their favorite “sticky licky” snack. They are special worker ants, called repletes, who provide an invaluable service for the sustenance of the colony.

Honeypot ants typically live in desert areas where food is abundant during the rainy season but scarce during the rest of the year. When food is readily available, workers continually feed the repletes. Once they’ve gotten the nutrition they need, the repletes store the excess honey, undigested, in their abdomens, which fill up like balloons.

Later, when food is scarce, the colony can go to storage areas deep in the nest, where the repletes hang from the ceiling. In response to a stroke of an antenna, a replete readily regurgitates the sugary liquid into the waiting mouth of the requestor. Now, that’s a balloon Pooh could use for honey. It’s just one of the many unusual ways our Creator provides for His creatures in a fallen world.

This special provision includes humans, by the way. In some cultures, the grape-sized repletes are a prized treat. Anybody ready for dessert?