Giant Controversy Without Cause

Controversy erupted over an out-of-the-way exhibit called “The Debate Continues Today” at a new visitor center at the Giant’s Causeway off Northern Ireland’s coast. Critics complained that the creationist interpretation of the formation of the famous geologic feature was given equal treatment with the evolutionist one, and it created a row in the UK. 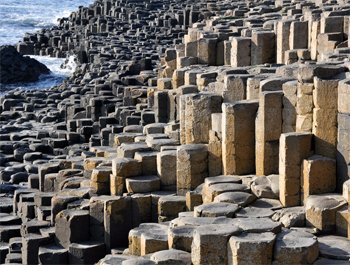 At a visitor's center in Northern Ireland, the slightest mention of a young-earth explanation for the Giant's Causeway met passionate resistance.

Visitors who went looking for the exhibit, however, were hard pressed to find it. There is no openly creationist exhibit at the Causeway’s center. The only possible offender is an audio track accompanying one exhibit in a back corner, where a menu on a small monitor allows patient visitors to eventually come across a brief mention of the young-earth creation explanation for the geology of the Giant’s Causeway (where tens of thousands of basalt columns reach up to 82 feet above the water’s surface). But the creationist view was not given credence; it was simply mentioned in a historical exhibit to illustrate some of the views that fall outside of “mainstream” science.

Throughout the center, a belief in evolution over billions of years is presented as fact. The creationist theory, that the basalt columns were formed by catastrophic volcanic and tectonic activity associated with the global Flood of Genesis 7, is not offered at all. The visitor center declares without ambiguity that the columns formed over millions of years and treats the Bible as a fable, on par with the legend of an ancient giant at the Causeway.

Yet an alarmed Richard Dawkins (who obviously did not visit the center before commenting on its supposed creationist content) indignantly declared that the exhibition shouldn’t have given the “intellectual baboons of young Earth creationism”1 a hearing. Under pressure, the National Trust reduced the creation reference to a 20-second clip that clearly states that creationism is at odds with the “scientific view.”