Not Just a Pretty Picture

Robert Jensen is one of these rare photographers whose child-like wonder at God’s world has never left him.

Robert Jensen is one of these rare photographers whose child-like wonder at God’s world has never left him. His astonishment at God’s creatures, great and small, keeps his camera lens shuttering.

No matter where a Christian looks, at the heavens or under leaves, he can find evidence of God’s handiwork. Bob’s particular passion is for the miniature world of creepy-crawlies, and his handiwork often graces the pages of Creation magazine, including the beautiful leopard gecko on the December 2003 cover.

What drives a fifty-year-old man to travel hundreds of miles through blazing sun and beating rain just to snap another shot of a rhinoceros beetle or a desert centipede? Well, we decided to ask him. Therein lies a story.

Robert (Bob) first became interested in photography at age 15, when his grandmother in Japan handed him his first camera.

An entomologist by training (one who studies insects and scorpions), he discovered after getting his master’s degree that no jobs were available in his field, except in the government. So he started working at the Boeing Company, recently celebrating his 24th year there.

Always on the lookout 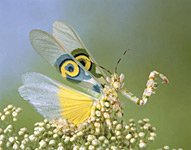 As a whole, Bob says he most enjoys his collection of praying mantid images. Whether local or exotic, they’re all fascinating and fun to photograph, he says.

Bob is always on the lookout for new shots. He especially loves insects and arachnids (e.g. spiders). Capturing insects may not be the same challenge as capturing a lion, but Bob loves it. The hard part, he says, is having the patience to photograph insects that don’t want to sit still!

As an experienced photographer, Bob likes to remind viewers that pictures do not tell the whole story. Film can’t necessarily capture what the eye can see, he explains. For example, if he photographs a gorilla on a sunny day, its eyes will appear too dark on film, due to its large brow ridges. So Bob must retouch such images on the computer to bring back what his eyes actually saw.

A lover of nature and nature’s Creator

Nature has always been Bob’s main interest in photography. Whether viewing animals in the local zoo or the “wild”, watching a cloudburst in the desert, or seeing a beautiful rainbow after a storm, Bob is always looking to capture God’s creation on film.

Asked about his favourite picture, Bob says it’s difficult to narrow down: “I have several, and each of them has a story.” Some of these favourite images appear on these pages.

To God be the glory

To explain the chief aim of his photography, Bob likes to point to the example of the great composer Johann Sebastian Bach (1685–1750), who once said that the chief goal of his music was to bring glory to God. After all, Bob says, “God is the One who originally created everything that I capture on film!” 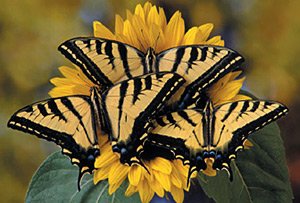 One of Bob’s all-time favourite photos is this trio of tiger swallowtail butterflies on a large sunflower.

Though he is very humble about his photography, Bob has won several awards, including:

In fact, Bob’s favourite book of the Bible is Genesis, because we find out there how powerful God is: “He created everything by just speaking it into existence. He didn’t have to experiment by trial-and-error, as theistic evolution suggests. He just spoke and everything was good.”

When Bob’s daughter was only six, he showed her one of his brilliant blue morpho butterflies. She asked him where it came from, and he told her that God created the original kind. “I’ll never forget her response”, Bob recalls. “She said, ‘He couldn’t have made it any better!’ Today’s scientists would do well to listen to her.”

Over the years, Bob has seen some powerful evidences given for creation and against evolution. Examples at the top of his list include the complete lack of evidence for evolution of structural complexity in genetic information. And also, the discovery that geological processes, such as mineralization and fossilization, can occur very quickly and do not require millions of years.

Yet Bob has learned that the things we see are not the main evidence for the Creator: “I must say that no matter what human evidence we find, the main reason I believe in a divine act of creation is what God states in His Word. The people for whom the book of Genesis was originally written would never have understood anything other than a literal creation in six days. When God commanded His people to work six days and rest on the seventh, because He had created everything in six days, His people would not have started a debate to determine what a day meant. They knew it was six 24-hour periods.”

Why is creation so important today?

Another of Bob’s favourite photos is a snowy egret and a waterfall photographed in Japan. He achieved the silky effect of the waterfall with a 1½ second exposure. The image appeared only for an instant, until some people walked by and scared the bird away.

Bob is very passionate about defending Genesis and the correct history of the world. He says, “The Bible tells us that the fear of God is the beginning of wisdom and knowledge (Proverbs 1:7; 9:10). Without belief in a Creator, you eventually end up with a world that operates on foolish ideas and philosophies that are devoid of real wisdom. People today use evolution as an excuse to ignore the Creator. If there is no Creator, then we cannot be held accountable or responsible for our actions. We can do and say whatever we please.”

Bob’s advice for young people interested in pursuing photography: “Be patient, do it to God’s glory, and find a good instructor or photographic judge. I never took any classes, but one thing that helped me tremendously was having an international photo judge critique my work for me. Sometimes it was painful, but it was a great learning experience, despite the fact that judging images is very subjective. Another thing that helped was studying images in various nature photography books and magazines.”

You can see more of Bob’s photos on his website at www.bobjensenphotography.com.