Nicolaus Steno has been recognized as making some of the first 'truly great discoveries' in geology.1 His fundamental principles of geology are still routinely used to interpret sedimentary rock layers.

Although he is called a founder of modern geology, most geologists do not realize that it was Steno's belief in the Bible, especially Genesis, that led him to make those discoveries.

Niels Stensen (as he was originally named) was born in Copenhagen, Denmark, on 10 January 1638. His father was a well-to-do goldsmith. Niels was brought up in Copenhagen as a Lutheran. 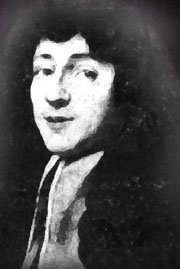 In 1656, Niels Stensen went to the University of Copenhagen to study anatomy and become a physician. He studied further in Amsterdam and Leyden in Holland. 'While in Amsterdam [he] discovered the parotid salivary duct (ductus Stenorzarianus).'2 After four years at Leyden, he sought a position in Copenhagen but none was available. Instead, 'he went to Paris, where he made important observations on the anatomy of the brain'.2

Stensen disproved the idea that the pineal gland was linked to human's spiritual nature, by showing that animals, too, had a pineal gland. He also traced the human lymphatic system. 'Although his contributions to our knowledge of the heart were soon overshadowed by William Harvey's great experiments on circulation, he [Stensen] was still the first to show that the heart consists of two relatively independent pumps.'3

In 1665, Stensen went to Florence in Italy and became court physician to the Grand Duke of Tuscany. Here he changed his name from Niels Stensen to its Latinized form, Nicolaus Steno. Fortunately, the Grand Duke was happy for Steno to conduct his scientific research as well as act as physician. 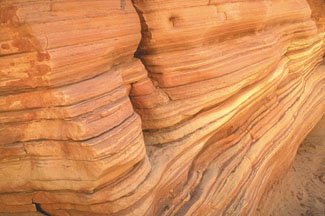 Steno published his geological findings in 1671 in The Prodromus [a preliminary treatise] to a Dissertation Concerning Solids Naturally Contained Within Solids, 'a book in which he outlined the principles of modern physical geology'.4 The bodies enclosed in the rocks included both fossils and crystals, while many of the rocks occurred in layers called strata. Steno's dissertation therefore covered the study of fossils (paleontology), the study of rock strata (stratigraphy) and study of crystals (crystallography).

The fuller dissertation foreshadowed in his Prodromus was never produced. Nevertheless, his work is acknowledged as 'one of the most fundamental contributions to geology because of Steno's qualities of observation, analysis, and inductive reasoning at a time when scientific research was nothing but metaphysical speculation.'5 In effect, Steno used the modern scientific method long before it became generally adopted.

Steno's brilliant geological insights did not arise in isolation. Surprisingly, it was Steno's research in anatomy that aroused his interest in geology. 'While dissecting a shark, the distinctive character of the teeth led him to compare them with certain fossils, found far inland, which he then realized were the remains of sharks of a former period, preserved in rocks once laid down in the sea.'2

That is, Steno recognized that fossils are the petrified remains of real plants and animals. He therefore rejected the idea, taught by some geologists at the time, that fossils were mere replicas of plants and animals, directly created by God within the rock layers.6 He also rejected the equally un-Biblical idea that fossils were the remains of real living organisms produced during '"practice creations" of God before He buckled down to the real business of creation'.7

Steno published these findings in his Sample of the Elements of Myology [the scientific study of muscles] in 1667, and demonstrated how the teeth had come to be mineralized.8 This was an enormous contribution to the study of fossils.

The shark teeth naturally led Steno to consider how such fossils came to be embedded deeply in the rocks. He reasoned that since the remains were of sea creatures, the sea must have once covered the area.9 Turning to the Bible for help, he found that 'we learn from Holy Scripture that all things, both when Creation began and at the time of the Flood, have been covered with waters.'10 Thus, using the 6,000-year Biblical framework, Steno developed one of the earliest directional geological accounts of Earth and life history. This work was of considerable influence in the 17th and 18th centuries.8

The well-known atheist Isaac Asimov admitted that 'Steno … suggested that they [the fossils] were ancient animals who had lived normal lives and in death were petrified.'7 However, Asimov wrongly concluded that Steno rejected Noah's Flood, because 'No supernatural forces were brought into [Steno's] explanation.'7 This conclusion was an unjustified extension beyond the facts. A religious justification would have been inappropriate in a scientific paper, and an appeal to miracle was not required in any case. As the writings of today's Flood geologists show, while there are definite miraculous aspects to the account of Noah's Flood,11 there is no need to appeal to any such thing to explain the geological consequences of the destruction wrought upon the Earth by water.

Just as the Ark rode out the Flood using the principle of buoyancy, such things as erosion, deposition, fossil formation, etc. were happening on a massive scale during the global Flood, on the basis of existing physical laws.12

Steno believed in a literal global Flood and other aspects of Genesis 1-11, such as the 6,000-year timeframe. He also used the Bible to interpret his geological findings, which he found were totally consistent with Noah's Flood. 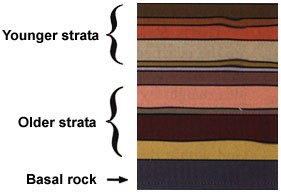 Figure 1: The fundamental principles of stratigraphy, established by Steno: deposition of each bed upon a solid substratum, superposition of younger strata over older ones, and the occurrence of all beds except the basal one between two essentially horizontal planes.

As a physician Steno travelled widely in the Tuscany region of northern Italy and used this opportunity to make a detailed geological study of the rocks of the area. He found that many rocks were formed by sedimentation. From these observations and his Biblical understanding, he 'established some of the fundamental principles of stratigraphy: deposition of each bed upon a solid substratum, superposition of younger strata over older ones, and the occurrence of all beds except the basal one between two essentially horizontal planes.'13 (See Figure 1.) While 'strata must originally have been laid down horizontally on a solid surface . . . their folding and breakage occurred later.'9 Such folding and breakage would account for the formation of mountains and other geological features. The principles of stratigraphic interpretation established by Steno are still regarded as basic nowadays.6,14

It is important to realize that Steno was not forced reluctantly into a 6,000-year timeframe by church dogma, as some evolutionary-minded historians claim. There was no recorded friction between Steno and any church authorities on the issue. Rather than church pressure, it was Steno's belief in a young Earth as described in the Bible that prompted his independent thinking on geology and fossils.

Steno's Prodromus 'laid the foundations of the science of crystallography. He reported that, although quartz crystals differ greatly in physical appearance, they all have the same angles between corresponding faces.'15 Similarly, each type of crystal of a chemical or mineral has its own characteristic angles (see Figure 2). The simplest crystal shape is a cube, which has six equal square faces all at right angles, e.g. common salt (sodium chloride). Quartz, beryl (e.g. emerald) and corundum (e.g. sapphire, ruby) are often found as hexagonal crystals with 120° between faces, and so on. This rule about the characteristic interfacial angles for each type of crystal is known as Steno's Law. It holds true for any two crystals of the same substance 'regardless of size, locality of occurrence, or whether they are natural or man-made'.15

Each type of crystal of a chemical or mineral has its own characteristic angles. Quartz is made of hexagonal crystals with 120° between faces.

While stratigraphy today is used as a major plank of evolutionism,6 its founder, Steno, was a firm believer in a literal, historical creation by God, as outlined in the Bible, and also the global Flood. This was true of the founders of many other scientific disciplines. Although some of them would not be regarded as theologically sound overall, it is still instructive to note that modern science blossomed in an intellectual framework of belief in a six-day Creation about 6,000 years ago.

Compare this reality to the protestations of the vociferous anticreationists who claim that belief in a miraculous original Creation is by definition opposed to scientific thought.

Throughout his life, Steno considered his investigations of the wonders of God's creation to be a Christian responsibility: 'One sins against the majesty of God by being unwilling to look into nature's own works.'16 He also recognized the sinfulness of man and our dependency on God: 'Let us at God's feet lay aside the soiled clothes of our sins'.3

Steno lived in various German towns during his later years, the last being Schwerin, where he died on 26 November, 1686. His achievements more than justify the way he is widely remembered, as a founding father of modern geology.

It is also important to remember that Steno was a Biblical geologist. His achievements were nurtured by his belief that the Bible records the true history—including geological history—of the world.