An Update on Grand Canyon: A Different View

Grand Canyon: A Different View is back in the headlines in America with a dispute over whether or not a federal review of the book actually took place.

The book that spawned a major controversy and a flood of emails and faxes to the U.S. Park Service, Grand Canyon: A Different View, is back in the headlines in America with a dispute over whether or not a federal review of the book actually took place.

A left-leaning group, Public Employees for Environmental Responsibility (PEER), which opposes the book being sold on government property because it “contradicts the park’s mission to teach science,” claims the federal government has approved selling of the book. In a WorldNetDaily.com report (October 19), the National Park Service denied PEER’s claim, saying the issue is still under review.

An October 13 press release distributed by PEER stated that according to materials obtained under the Freedom of Information Act, no review took place. The release goes on to say the following: “Despite telling members of the Congress and the public that the legality and appropriateness of the National Park Service offering a creationist book for sale at Grand Canyon museums and bookstores was under review at the national level by several offices, no such review took place.” 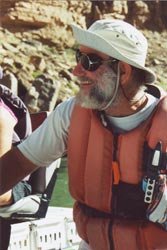 Tom Vail, author/compiler of Grand Canyon: A Different View, has been rafting the Colorado River through Grand Canyon for several years.

Jeff Ruch, executive director of PEER, told the Washington Post (October 15) that the Park Service “in essence made the decision to keep the book on sale.”

Park Service spokeswoman, Elaine Sevy, disagreed. In reports published by the Washington Post and WorldNetDaily.com, Sevy stated that the issue is still under review and no deadline has been set for a final ruling. She also explained the reason for the delay: “The Interior Department, which oversees the Park Service, had expected a final decision in February, but had been delayed as lawyers at the Interior and Justice departments tackle the issue.”

“It’s difficult on where to draw the line on these issues,” Sevy added. “…This could be precedent-setting, and we are moving very carefully and very cautiously.” She added that the book will continue to be sold until a decision has been made.

Ruch, who also represents public-employee geologists, told WorldNetDaily.com that they “are outraged and humiliated” that the book is still in park stores. He revealed more of his disdain for the book in the PEER press release, stating that, “Promoting creationism in our national parks is just as wrong as promoting it in our public schools.”

The book’s critics, including presidents of seven geological societies which represent around 100,000 geologists and paleontologists [see Geologists in an Uproar], say the book is not about science—stating that the biblical view of earth history is a “particular religious interpretation … under the guise of being a scientific explanation.”

Eugenie C. Scott, executive director of the anti-creationist organization The National Center for Science Education, told the Washington Post, “The science presented is substandard, inaccurate and greatly at variance with the mainstream scientific view presented at Grand Canyon National Park.”

During the peak of the controversy (early in 2004), the U.S. National Park Service headquarters in Washington D.C. was deluged with email from thousands of people, both in favor of the book being removed and others against it. Thousands of Answers in Genesis (AiG) supporters and others wrote the Park Service to request that the book not be banned from Park bookstores. Some emails and faxes came from as far away as China, a country where communism and censorship reign. This supporter, who is an American living in China, wrote the following:

… It’s difficult for us to believe that anyone, including leading evolutionists, would attempt to remove ANY book from sale in a park bookstore just because it may offer an opposing view (after all, is anyone forced to buy or read the book and if one chooses to buy and read the book, must he accept its viewpoint???).

As a taxpayer, I surely would not want our dollars to support a National Park Service that condones censorship and bans books.

Censorship is something many evolutionists know far too well, especially when it comes to the public schools (where, by and large, the creationist position is outlawed), says AiG-USA president, Ken Ham. “Evolutionists know, and from our experience we have found, that as soon as students hear the creationist interpretation and how observational science supports it, they can see the flaws in the evolutionists’ philosophy.”

So, why are evolutionists scared of this small creationist book, which has now become one of the Park’s top 10 sellers? Ham asks the same question, especially when Grand Canyon: A Different View has been relegated to the non-threatening “inspirational’ section” (instead of the “natural sciences” section), showing a bias against the creationist position from the very start.

“Here they’ve put it in the inspirational section, saying it’s religious and not real science, and yet they’re still scared of it. Why? I think the reason they’re scared is that when you read the book, you’ll discover that qualified scientists (who are creationists) use observational science to show that the Canyon is best explained in terms of Noah’s Flood and a young earth,” says Ham.

“Is the evolutionist/millions of years interpretation of Grand Canyon so weak, that evolutionists can’t even allow one photo book to be read by people for fear that some will embrace the creationist interpretation?” Ham continues: “Whether it’s public schools or the Grand Canyon bookstores, evolutionists aggressively do their utmost to protect their fallible ideas from being questioned—they don’t want people to even think there’s a question!”

Many in the church don’t realize that the Bible is the history book of the universe and that it can be trusted on every issue.

Sadly, many in the church don’t realize that the Bible is the history book of the universe and that it can be trusted on every issue, including science fields like geology, biology, astronomy, etc. Many have been taught to reinterpret the Bible on the basis of the world’s teaching concerning the supposed millions of years of earth history.

Such compromise ultimately can lead to compromise in all areas of life, including morality. After all, if the history in the Bible is not true, then neither is the morality (or the gospel) that is based in the history also true. At AiG, believing in a young earth, which is totally consistent with what scientists observe at Grand Canyon, and as is clearly stated by creation scientists in Grand Canyon: A Different View, is a logical and reasonable consequence of accepting the authority of the Word of God as an infallible revelation from our Creator.

The real reason there continues to be such a furor over a picture book is that a small text is clearly showing that the Bible is true—and that this is all part of the battle between secular humanism and Christianity in Western cultures.

And it is this battle to have the culture recognize the truth and authority of the Bible that AiG must continue to fight!

Contrary to what has been reported, the book has always been sold in the “inspirational” section of the bookstores, not in the “natural sciences” section, even though the book is filled with scientific evidence of a Global Flood from many scientists who have Ph.D.’s in the fields of geology, paleontology, biology, physics, and geophysics.