The Reformation of the 16th Century

A Lesson for Today

The Reformers of the sixteenth century believed the only path to lasting reformation was the Word of God. As a result, the Bible again became the ultimate authority.

Surrounded by powerful dignitaries of both church and state, the young Augustinian monk was asked whether he would repudiate the books gathered on a table before him. In a ringing voice he declared that he could not deny them because they contained the truth of God’s Word and his conscience was captive to that Word. He said that it was not safe to go against his conscience. Though disputed, he reportedly closed his remarks by saying, “Here I stand, I can do no other, God help me.”

Martin Luther’s refusal to recant at the Diet of Worms in April 1521 signaled a turning point in the Reformation that swept throughout Europe in the sixteenth century.

The Reformation followed centuries of effort by clerics and theologians to address moral and religious decline in the Western church. Demands for reform can be traced back to 1307 when the office of the Pope and its associated “city” of workers moved from Rome to France. For 70 years the seat of the Roman Catholic Church, the papacy, remained in France. During this confused era, behavior within the church and society sank to scandalous lows through the influence of many factors, including Scholastic theology, which was based largely upon human reasoning.1 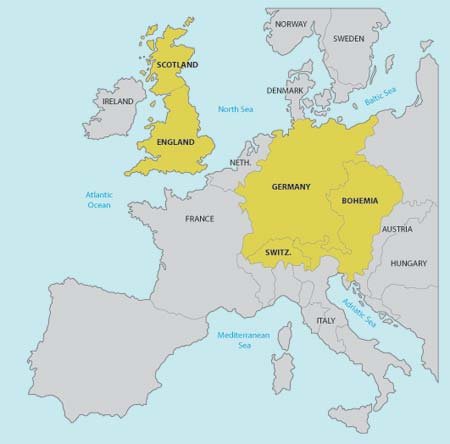 The Bible Sparks Reformation Throughout Europe

Reformation transformed much of Europe as the Holy Spirit inspired his people to return to the authority of the Bible.

When the papacy finally moved back to Rome in 1378, rather than healing the scandal, the move worsened the scandal. Many church officials rejected papal authority and elected a rival pope who once again took up residence in France. Now, the presence of two popes, both of whom claimed to be legitimate and who hurled accusations and disdain at one another, scandalized the Christian world.

Before the 70 years in France,2 rumblings of discontent within the church had been heard, but now the situation was worse. All those who had a true heart for the church of God agreed that a reformation was needed, but what would it be and how was it to be accomplished? Different solutions were proposed, but no consensus about the cause or the remedy could be reached.

A group known as the Conciliarists argued for a general council (a special meeting) of the church. They believed the problems came from an abuse of authority. The Conciliarists were convinced the prime culprit was the pope himself, who had usurped authority that belonged exclusively to church councils. In their view, the supreme authority of the church needed to be a legitimately convened general council, not the pope.

Another group, known as the Pietists, believed the church’s problem was the low moral state of both the clergy and the laity. Sadly, this was an accurate description of the situation. But how could the moral condition of the church be improved? The Pietists were confident that the key to solving the problem was to provide living examples of dedication and self-sacrifice.

A third group, the Humanists, believed the problem was ignorance and the solution was education. As a first step, this group wanted to recover the wisdom of the ancient Greeks and Roman philosophers who promoted ethics and strict moral standards of conduct. The Humanists believed the application of their insights to medieval Europe would reform the church.

The root of the church’s problem was wrong doctrine. Thus, the only path to lasting reformation was the Word of God.

However, others warned that moral reform alone would be inadequate. Clerics John Wyclif of England and Jon Hus of Bohemia called for a more radical approach. In their view, the root of the church’s problem was wrong doctrine. Thus, the only path to lasting reformation was the Word of God. 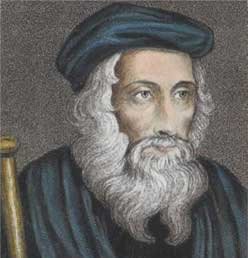 John Wyclif, the “Morning Star of the Reformation,” translated the Bible into English because he believed that everyone should be able to read the Bible for himself. 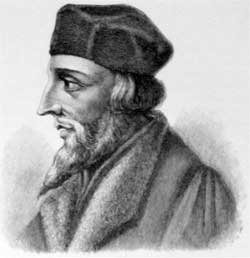 Because Jan Hus rejected the church leadership’s claim to ultimate authority and he encouraged people to read the Bible for themselves, he was excommunicated from the church. Later, he was burned at the stake.

The invention of the moveable type printing press was a huge aid in the advancement of the Reformation work. In 1455, Johannes Gutenberg of Germany printed his first book, a Bible. Although this Bible was printed in Latin, Gutenberg’s invention proved to be a turning point in history because it enabled Reformers to quickly print and distribute thousands of Bibles in vernacular languages. No longer did Bibles have to be transcribed one at a time. 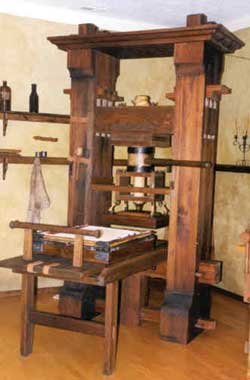 Johannes Gutenberg printed the Bible on his newly invented press. This invention made reproduction of God’s Word quicker and cheaper, thus allowing even the common man to afford a copy.

In 1516 Erasmus edited the first published Greek New Testament. The Novum Instrumentum, or New Instrument as it was called, was studied throughout Europe. In Germany, Martin Luther eagerly searched its pages. Reading Romans 1:17, he encountered the phrase “the righteousness of God.” At first it terrified him. But he soon came to understand that the righteousness of God was not an impossible standard that God required him to reach by self-effort. Rather, the “righteousness of God” was his free gift in Christ and received by faith alone. When that truth entered Luther’s understanding, he felt as though he had entered the gates of Paradise. 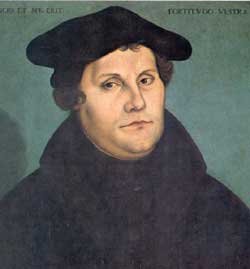 Martin Luther’s 95 theses, which he posted to a church door, listed some objections to an unscriptural church practice (the sale of indulgences). He later translated Erasmus’s Greek New Testament into German.

In 1517, Luther posted 95 theses to the door of the Castle Church in Wittenberg, condemning the selling of indulgences for the forgiveness of sins and release from the pains of Purgatory. In his 95 theses, the monk called for an examination of what the Word of God taught about indulgences. Soon all Europe was ablaze with Luther’s challenge. While some dismissed his protest as the work of a solitary monk, in reality it was a clarion call for a reformation of the church by the power of the Word of God.

In Zurich (Switzerland) on January 1, 1519, the priest Ulrich Zwingli departed from church tradition of prescribed readings from the Gospels and Epistles by preaching a series of expository sermons from the Gospel of Matthew. In the weeks that followed, people crowded his church in Zurich to hear such revolutionary teaching. This marked the beginning of the Reformation in Switzerland. 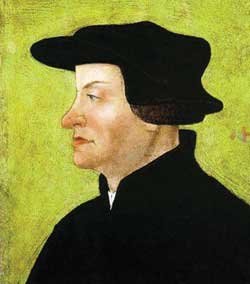 Ulrich Zwingli, a priest in Zurich, started a reformation in his church by preaching through the New Testament instead of reading prewritten materials. Zwingli believed that even the common man could read and search the pages of Scripture. 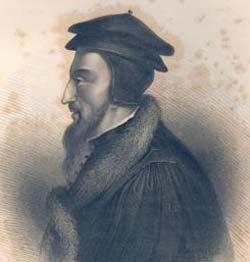 In England, Thomas Bilney, a fellow of Trinity College, Cambridge, was converted by reading the Greek New Testament. He began meeting with fellow students at the White Horse Inn to discuss the condition of the English Church. Soon the winds of reform spread throughout England.

The cry for a thorough reformation echoed through all Europe. Although the outward circumstances varied from country to country, the one constant was a reformation of hearts and lives by a return to the authority of the Word of God. With the recovery of the Word of God, there was the corresponding recovery of the gospel of grace. When the gospel of grace was preached in power and purity and received by faith alone, the lives of people were changed. The doctrines of justification and acceptance by God now became living realities in the hearts and lives of countless multitudes, rather than just religious phrases. 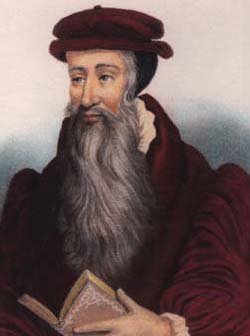 John Knox helped write the Scottish Confession of Faith, which brought the church back to the truths of Scripture and lifted the Bible up as the ultimate authority above the church and its leaders.

This movement of God’s Spirit also impacted the culture.

The Reformation reached forward and spawned many movements, including the variegated influence of English Puritanism, which in turn gave rise to the great missionary movements of the eighteenth and nineteenth centuries. The impact brought down many strongholds, including slavery, child labor, polygamy, cannibalism, and other forms of societal ills.

The Reformation was the restoration of the Word of God to its rightful place in the life and witness of the church. While the moral reformers sincerely desired to see the church reformed, it was the doctrinal reformers, led by Luther, Zwingli, Bilney, and others who had the wisdom to perceive that the Word of God alone had the power to accomplish reform. Luther himself said that he did nothing; the Word did it all.

The 5 Solas of the Reformation

Though widely known a generation ago, the five solas are frequently overlooked in the modern church. Each is a Latin phrase. When taken together, they summarize the teaching of the Reformation. They stress the positive aspect of the truth and how the medieval church distorted the truth.

This sola expresses the conviction that all teaching of the church for doctrine and practice must be built upon that which is revealed in Scripture or deduced by good and necessary consequence from the Scripture. So the Word of God is the supreme and final authority. It alone has the power to bind the conscience.

Salvation comes by the free grace of God. Man cannot—and need not—do any work to earn God’s favor. Salvation is not based in any way upon human merit.

Christ is the only mediator between God and man. Thus an individual can go directly to God through Christ.

Faith in the person of Christ is the instrumental means of salvation. The Roman Catholic Church taught that, while initial grace was infused at baptism, the person had to cooperate with that grace until God accepted him as righteous.

Salvation is exclusively God’s work, so he alone is worthy to receive praise and thanksgiving. This sola expresses the highest motive for all the Christian’s deeds—the glory of God alone.

Dr. Herb Samworth, currently the curator of the Van Kampen Collection at the Holy Land Experience in Florida, earned his doctorate in theology from Westminster Theological Seminary. He also teaches in national and international institutions.