A Call Back to Truth

Interview with theologian John MacArthur about the state of the church

While Martin Luther called the church back to the truth of Scripture and the simplicity of the gospel, modern movements like the emerging church uphold “mystery” and question the traditional understanding of the gospel.

“We want to embrace mystery rather than conquer it,” declare leaders within this movement. One prominent figure was quoted in Christianity Today: “I don’t think we’ve got the gospel right yet. . . . I don’t think the liberals have it right. But I don’t think we have it right either. None of us has arrived at orthodoxy.”

Emerging churches are an informal network of worldwide Christian communities who believe God’s way for today’s generation is to focus more on relationships and emerging ideas than hard-and-fast truths and traditional statements of faith. They favor dialogue over doctrine and are filled with people who say traditional church no longer works for them. Inside their walls, you’ll typically find couches in place of pews, conversation instead of preaching, compromise in place of convictions, and questions in place of truth.

Dr. John MacArthur, a popular evangelical writer and pastor, expressed his deep concern about the Emerging Church during a visit to Answers in Genesis’ Creation Museum. While those leading the movement say that the gospel can’t be clearly known, they presume to know one thing for certain: “The Bible doesn’t mean what traditional people think it means.”

The emerging church is just one of the latest assaults on the truth and certainty of God’s Word.

“They are saying, in effect, that God may have spoken, but He mumbled, and we’re not really sure what He said. Saying that Scripture is not clear is just another way to undermine biblical authority,” MacArthur explains.

MacArthur explores past and present assaults on truth in his book The Truth War: Fighting for Certainty in an Age of Deception. We caught up with him for a special interview. 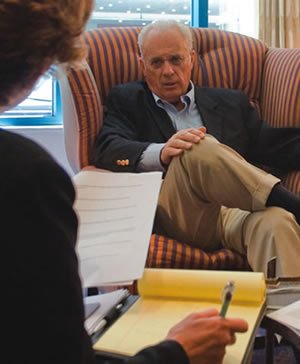 Dr. John MacArthur sat down with past Answers magazine national editor Pam Sheppard to answer questions about the emerging church. 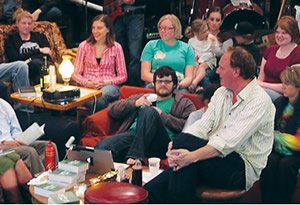 Solomon’s Porch, pastored by Doug Pagitt, is a popular emerging church in Minneapolis, Minnesota. This and other emerging churches seek to embrace mystery and put less emphasis on truth.

This kind of thinking is very convenient, he explains. If God’s Word is not clear, then we’re not responsible to follow it.

“It allows them not to take a position on homosexuality, premarital sex, or anything, besides ‘Let’s light some candles and incense, think good thoughts about Jesus, and give to the poor,’” he observes.

But as MacArthur reminds readers in his book’s introduction, “To claim that the Bible is not sufficiently clear is to assault God’s own wisdom and integrity.”

If they don’t believe anything, they can’t offend anybody. They’re not under any mandate to say anything in particular. They play on the bad experiences and disappointments of people raised in the church. They basically can define themselves by experiences that are familiar to the culture.

MacArthur brought up another quote from a different Christianity Today article. He considers it a metaphor for the whole movement. A young lady stated that she loves Donald Miller, the author of Blue like Jazz, because she wants to be religious but isn’t prepared to let religion alter her lifestyle.

“I’m a Jesus girl,” she said. “But I also like to go out and do tequila shots with my friends.”

Is this truth war unique to today’s postmodern culture? The image on the cover of MacArthur’s book—the serpent from the garden of Eden—gives readers an idea about how long this battle has been going on.

MacArthur, who addressed the importance of origins in an earlier book The Battle for the Beginning, says he always asks the same question when he discusses the creation account with others, “At what point do you start believing the Bible? Do you kick in at Genesis 4, Exodus, Deuteronomy—when do you decide this is believable?”

MacArthur says the emerging church promotes a different version of church history than the one he gives readers in Truth War:

All the great heroes of the faith end up becoming fools. And the antiheroes—the fools who compromise and who don’t take a stand—become the heroes.

“It’s turning history on its head,” he says. “They undo the Reformation so they can go back to a quasi-Christian, medieval spirituality.”

The Church Today—How Did We Get Here?

Speaking on the church today, MacArthur writes, “It is quite possibly more susceptible to false teachers, doctrinal saboteurs, and spiritual terrorism than any other generation in church history. Biblical ignorance within the church may well be deeper and more widespread than any other time since the Protestant Reformation.”

MacArthur attributes much of this to the 20 years of the seeker-friendly movement, which he says stripped Bible teaching, especially expository teaching, out of the pulpit. “You end up with a very, very marginally knowledgeable church, largely made up of unconverted people,” he said.

“I hear pastors say to me, ‘Oh, I believe the Word of God is sharper than any two-edged sword,’ and I say, ‘It’s good that you say that, but when I hear you preach, you tell a bunch of stories and a bunch of cultural insights. You think your own inventions have more power than the Word of God?’”

MacArthur says that people frequently tell him that it’s easier for him to preach the truth than other people because he has greater courage, because he’s bolder.

The Church of Tomorrow—Will It Stand?

Is Dr. MacArthur worried about this latest attack on God’s Word? As someone who has defended truth, verse by verse, for over 30 years, he is confident that truth can never be shaken.

“No matter what deviations come up, we always have the truth,” MacArthur says about God’s Word.

However, Christians have the obligation to protect and defend that truth. As he states in Truth War,

It is our duty to guard, proclaim, and pass that truth on to the next generation [1 Timothy 6:20–21]. We who love Christ and believe the truth embodied in His teaching must awaken to the reality of the battle that is raging all around us. We must do our part in the ages-old truth war. We are under a sacred obligation to join the battle and contend for the faith.

Previous Article The Reformation of the 16th Century Next Article Is It Time for a New Reformation?