A Challenge: Statement of Faith

I have a challenge for you. It regards our updated, detailed statement of faith. Here’s the challenge: please consider getting a copy of your church’s, college’s and other organizations’ statement of faith. Then, using AiG’s, discuss them with the leadership at these places. Now, I have to warn you that in some instances, you may experience some hostility, particularly concerning details about Genesis, gender, marriage, and so forth. But I believe this exercise could really help some churches and institutions for the future and can also help uncover compromise that can lead (or has led) to destructive consequences.

To understand why I believe this is a very important exercise, let me give you some background, including another interesting example of what compromise in a “Christian” institution can do.

How many of the Ivy League schools (Harvard, Yale, Princeton) were once Christian? I think all of them. How many are Christian today? None, as far as I know. Even well-known colleges like Wheaton, Calvin, Biola, and many others do not have the stand on Scripture they once had, and many such colleges have caved to evolution, LGBTQ movement, abortion, and other issues. Somewhere in their history, they departed from what the founders intended. There are only a few Christian colleges and universities that will stand with Answers in Genesis today. Many churches and denominations have also departed from what they once were and have become very liberal.

I’ve been burdened about this lately in thinking about Answers in Genesis, the Creation Museum, and the Ark Encounter. Years ago, we set up an Editorial Review Board, headed by Dr. Georgia Purdom, that reviews all articles, books, and other materials produced or distributed by AiG to ensure there is no mission drift.

Recently, in an effort to remain consistent and steadfast in our purpose, I authorized the Answers in Genesis Oversight Committee (AiG Oversight Council). It includes nine of our staff (including some of our younger visionaries) and is headed by Bodie Hodge. They monitor the entire ministry to make sure we adhere to our mission and report any areas that need changes to help stop any possible drift away from our bold stand on God’s Word beginning in Genesis. This committee recently spent hundreds of hours working through our statement of faith to reinforce it as we look at what is happening in our churches and culture. This was then presented to the board for approval (which happened recently), and it is enclosed for you.

Before I let you know about a recent incident with a “Christian” college, let me explain some items regarding this statement of faith.

We recognize how anti-Christian the culture is becoming and what legislation like the Equality Act could do. It was therefore important for us to be very detailed regarding what we believe about gender, marriage, and so forth and also included relevant Bible passages. If there are any legal challenges, we want to show that we truly have sincere convictions about all these matters based on God’s Word, as we are a Christian organization.

We recognize how anti-Christian the culture is becoming and what legislation like the Equality Act could do. It was therefore important for us to be very detailed regarding what we believe about gender, marriage, and so forth and also included relevant Bible passages.

Regarding Genesis, we know there is rampant compromise throughout the church and in Christian institutions. We are also aware that we can’t just use general language but must be specific to counter all the compromise positions we are aware of. For instance, we know that just stating a belief in creation could be interpreted as allowing evolution and millions of years. Stating belief in Adam and Eve could still assume their evolution from ape-like creatures. There are those who say they believe in a worldwide or global flood, but they actually mean part of the world or globe. And it goes on. You will see that we worked hard to be specific enough to stop people from using the wording to justify compromised positions and even cults. Of course, we will need to continue to monitor, knowing how “creative” some people can get to justify not believing God’s Word.

Obviously, fallible man can come up with all sorts of ways to try to avoid believing what is true. But we did our best not only to be detailed but also to provide specific passages of Scripture.

Because we are a non-denominational organization, we do not take specific positions regarding eschatological positions (other than that Jesus will return) and some other denominational issues. Now, some may say that just as we are very detailed about Genesis, we should be as detailed with the book of Revelation. But the point is that Genesis 1–11 is the foundation for all doctrine, for the rest of the Bible, and for our Christian worldview. Revelation is not the foundation for these. And yet many churches will have detailed positions on Revelation but not Genesis. This is a major problem, because rejecting a literal Genesis (or allowing evolution, millions of years, and so forth) is what has undermined much of the church and helped lead to an exodus of the younger generations.

I explain all this in my new book released this month, Divided Nation: Cultures in Chaos and a Conflicted Church. This book details four major areas that I believe many families and churches have neglected to teach and has led in many ways to a largely lukewarm church. I give a presentation on this topic and have included in the book the illustrations (in color) that I use for this presentation. And I provide a link for anyone to have access to those illustrations to give a similar talk. I pray this will help wake up those in the church who don’t understand what has happened to the younger generations and why compromising Genesis has led to terrible consequences for the church and culture. It will also assist those leaders who stand with AiG by giving them tools to help teach this message.

Now let me give you just one recent practical example of what happens when compromise creeps in.

Recently, AiG sent out emails to various colleges about our need for hundreds of seasonal workers at our two attractions. This is a great opportunity for college students and a great opportunity for us to impact them spiritually. Well, one college that received our email was Union College in Barbourville, Kentucky. Here is a response we received from the college minister (who lists his preferred pronouns): 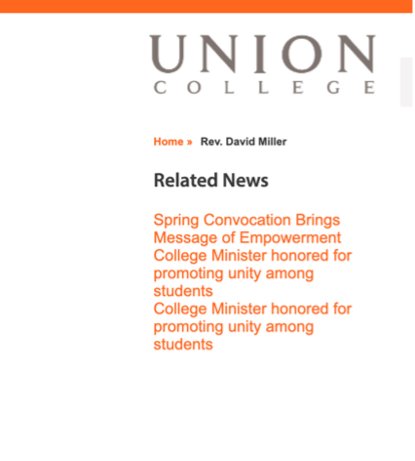 By the way, it’s interesting to note that this same Reverend was honored for “promoting unity among students.” I guess that means unity among students who don’t have the same stand on Genesis as AiG. He wouldn’t even let students decide if they would be interested in a seasonal job at the Ark or Creation Museum. I guess those students don’t have the ability to decide such a matter for themselves, though I’m sure they are encouraged to decide their own pronouns! No doubt, the Reverend wouldn’t want any students being impacted by AiG, as then they may promote “disunity” with professors and students if they challenged them on Genesis! 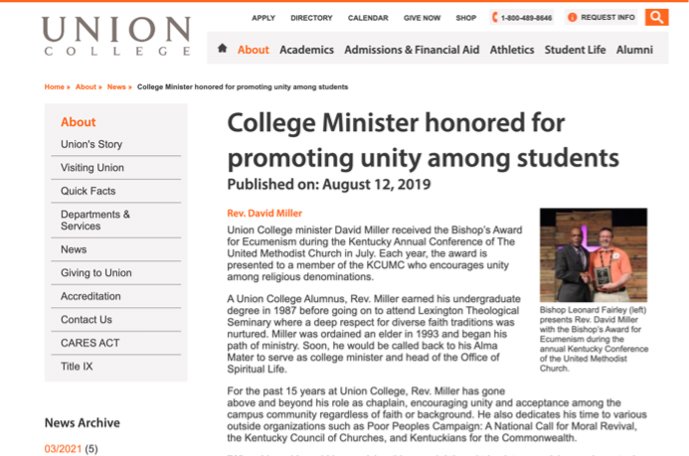 But let me give you some good news! There are some Christian institutions, though a small minority, that stand with Answers in Genesis on God’s Word from the very first verse.

But let me give you some good news! There are some Christian institutions, though a small minority, that stand with Answers in Genesis on God’s Word from the very first verse. And such institutions want their students to work at AiG, the Ark, and Creation Museum. Two such places that my own children have attended are Bob Jones University in South Carolina and Appalachian Bible College in West Virginia. Look at the difference between their responses and that of Union College above:

We’re thrilled to partner with such a university and a college. AiG is helping to impact their students for the Lord in many ways through employment, and within the next 12 months I will be speaking at both of these institutions. And we’re working on some exciting future projects that will have a great spiritual impact. Both the institutions above have very strong statements of faith with strict adherence to a literal Genesis. But such institutions are a small minority.

We are working hard to preserve this ministry for the future, as we’ve done in the past. Those who have followed us since the beginning often comment that our uncompromising stand has never changed—and we pray it never will. God’s Word has never changed. Even though the culture has changed, we don’t change our stand on the Word of God, but we do change methodology and add resources and update various items to deal with the latest issues in the spiritual battle raging around us.

So, as I stated earlier, I am urging our supporters to encourage Christian leaders to consider teaching the message of the new book Divided Nation, for which we have provided all the slides and content.

Also, I’m encouraging you to use the updated Answers in Genesis Statement of Faith to start a discussion with churches and colleges about how detailed their statements are worded and how they can impact where these institutions could be in the future. This is all part of our ministry to help equip people with answers and give direction. It’s also an integral part of our 2021 theme, Waking Up the Church.

Thank you for your ongoing support that enables us to be so active in proclaiming God’s Word and the gospel.