Is the Debate Really Over?

“The debate is over,” says Dr. Hugh Ross. So reported the website of Hamilton Strategies (HS) in October 2014.

Renowned astronomer and Reasons to Believe founder Dr. Hugh Ross made a bold claim at Southern Evangelical Seminary’s (SES, www.ses.edu) recent 21st Annual National Conference on Christian Apologetics, which drew nearly 2,000 to Calvary Church in Charlotte. A pastor, astronomer and researcher, Ross made the compelling statement that “the debate is over” among scientists when it comes to whether there is a causal agent in the universe. Instead, he said, the conversation is shifting to whether God is a personal God.

In his conference lecture, “Beyond the Cosmos,” he reportedly presented new scientific evidence that expands our understanding of the Creator and His amazing abilities.

During his talk, Ross used the words of atheist physicists, L. Dyson, M. Kleban and L. Susskind of the Department of Physics at Stanford University, who in their paper, Disturbing Implications of a Cosmological Constant, stated that “another possibility is an unknown agent intervened in the evolution, and for reasons of its own restarted the universe in the state of low entropy characterizing inflation.”

But it is one thing for a few prominent scientists to admit the “possibility” of an “unknown agent” who “intervened in the evolution” of the universe. It is quite another to say that the debate is over about this meager admission.

Dr. Ross’ bold claim that the ‘debate is over’ regarding whether a causal agent is behind the universe will undoubtedly create an uproar both among scientists and among atheists. . . . But given what science reveals to us, such a claim is not only reasonable but also increasingly confirmed by science. As Christians, we believe that this causal agent is the God who has revealed Himself to us in Holy Scripture. But even among non-Christians, scientific research is actually opening doors of opportunity for believers to share their faith with increasing confidence, understanding full well that there truly are ‘reasons to believe.’

But is the debate about whether there is a causal agent behind the universe or not really over in the scientific world? And has this claim increasingly been confirmed by science? Well, to answer those questions we need to think carefully and define our terms.

Certainly, there appear to be more scientists today than 20–30 years ago who are willing to publically acknowledge a “causal agent” or “intelligent designer.” But most will not admit that the agent or designer is a god, much less the God of the Bible, and fewer still will believe in Jesus Christ and His inerrant Word. Still, the 1998 study of the National Academy of Sciences (biological and physical science sections) by Larson and Witham showed that over the course of the whole 20th century the vast majority of our leading scientists were atheists and agnostics. It is extremely doubtful that that state of affairs has significantly changed in the last 15 years, given how visible and aggressive the “new atheists” have become in the Western world in publicly promoting their atheism.

Furthermore, the Bible says that everyone knows that God (the God revealed in Scripture) exists but most refuse to worship Him and give thanks to Him because they are suppressing the truth in unrighteousness. To cover their sin, they deny the witness of creation and their conscience about the existence and nature of the Creator (Romans 1:18–20, 2:14–16). And they will continue to do this, the Bible makes clear, regardless of scientific or any other evidence, until they are prepared to repent of their sin. So influential atheists like Richard Dawkins and Lawrence Krauss will continue to argue that science proves there is no God. And the media and leaders in science and secular academia will continue to give voice to their views.

Is science increasingly confirming a causal agent for the universe? Well, science doesn’t confirm anything. It is scientists who confirm things. Of course, creation scientists have always seen abundant scientific evidence that God created the universe, just as He said. But when Ross and many others (and possibly Land) say “science is increasingly confirming a causal agent for the universe,” they mean that scientific evidence is mounting in confirmation of the supposed big bang and therefore of a beginning and therefore of a Beginner. They also point to the “fine-tuning” of the laws of nature and other characteristics of the universe, which they attribute to God’s guidance of the big bang expansion process. But the big bang idea is impossible to harmonize with Genesis. So God didn’t guide that process to create, because the big bang never happened. And explosions don’t produce order and fine-tuning. The God of the Bible does and did in six days, not over the course of billions of years.

The HS reporter tells us that in the lecture Ross answered these questions:

After answering them Ross reportedly concluded with the following:

What science has learned about trans- and extra-dimensions helps explain these and other paradoxical doctrines people encounter in Scripture and provides us with a powerful tool for establishing that the Bible alone is the inspired written Word of God. 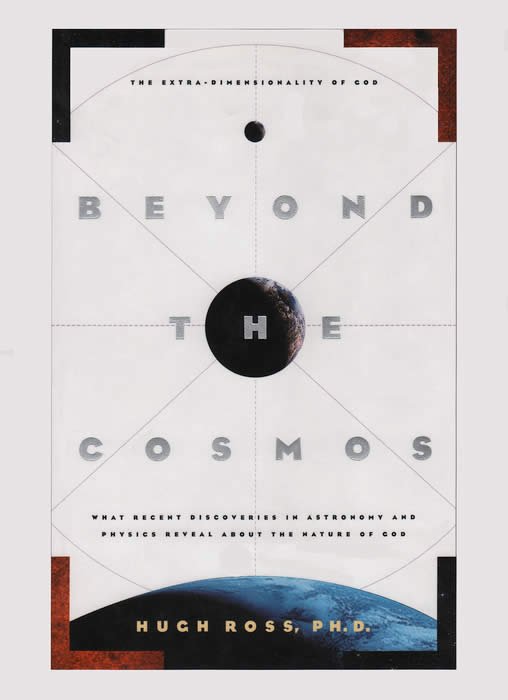 It is simply preposterous to think that modern science can answer these theological questions. The Bible answers the first two, the second two will likely never be known by finite man, and the last question is misguided because it was the blood of the Who on the Cross, not how long He was on the Cross, that was the means of atonement. Regarding trans-and extra-dimensionality, I’m reminded of Dr. William Lane Craig’s rather scathing critique of Ross’s book Beyond the Cosmos (1996) in the Journal of the Evangelical Theological Society (JETS 42:2 [June 1999]: 293–304). In giving as charitable an interpretation of Ross’s book as he can, Craig (who like Ross, sadly, is also compromised with the big bang and billions of years) says (p. 294), “talk of the modern discovery of God's extra-dimensionality may be written down to a combination of theological naiveté and scientific over-exuberance” and “a terribly misleading way of affirming that Christian doctrines entail the transcendence of God.”

But Denying and Twisting the Word of God

But furthermore, when Ross speaks of science powerfully confirming that the Bible alone is the inspired Word of God, what he really means is that the theoretical big bang cosmos and uniformitarian story of billions of years of Earth history fit beautifully with his old-Earth, day-age, local-flood, death-before-the-Fall misinterpretation of Genesis based on those naturalistic views of history, not based on sound handling of Scripture, as I illustrate in my critique of Ross’s creation story.

As HS declared, Ross’s Reasons to Believe organization attempts to harness “the power of science for evangelism and desires to communicate that science and faith are, and always will be, allies, not enemies. . . . Through his books, podcasts and speaking engagements, Ross engages skeptics and equips believers with powerful reasons to believe in the God of the Bible as the Creator and Savior.”

I fully agree with the HS reporter, who said the following:

But sadly, most of the leading apologists in the church today are defending “their faith,” but failing to defend the truth of Scripture at one of the greatest points of attack: Genesis 1–11 (which is ultimately the foundation of the gospel itself, so that an attack on it is indirectly an attack on the gospel). Worse than that, many of these apologists are doing exactly what Hugh Ross is doing—undermining (subtly attacking) the truth of Scripture by using the myth of the big bang and millions of years to “reinterpret” Genesis to make it seem to be “confirmed by science.” But such “reinterpretations” are exegetically indefensible and simply indirect ways of saying “the Bible is wrong,” as Coming to Grips with Genesis and this article clearly show. The God of the big bang and millions of years of death, disease, extinction, and natural disasters is not the God of the Bible.

True apologists will not “defend their faith.” They will defend the truth of the Bible, which should be the object of our faith and the inerrant source of truth we must believe. Only when we trust the Word of God are we really trusting God. It is the rock we should build our lives on, not on the shifting sands of human reasoning (Matthew 7:24–27). Genesis teaches creation in six literal days, about 6,000 years ago, and a global Flood in Noah’s day. And the scientific evidence (divorced from the atheistic, naturalistic assumptions controlling the majority of scientists) overwhelmingly confirms the literal truth of Genesis and exposes the lie of evolution and millions of years, as the books, DVDs, and articles on this website show. Let God be true and every man a liar (Romans 3:4)!

With the growing hostility in our culture toward biblical Christianity, the claim that “the debate is over” (even if just about the existence of a “causal agent”) is not only false, but a deception. Now more than ever it is time for all Christians to believe and defend the truth of God’s Word, beginning with all of the first 11 chapters of Genesis.

Email me with new blog posts by Terry Mortenson: