Here’s more evidence of this country's plunge into the moral abyss, including in the professing Christian church.

A conference is coming up in November 2014 to promote the acceptance of lesbian, gay, bisexual, and transgender (and surely other) forms of sexual immorality within the Christian church.

The ad for this conference on a sidebar of one webpage is below. Note carefully the claims about The Reformation Project. 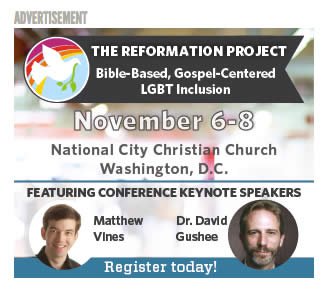 The link takes you to the webpage of the conference and the lineup of speakers. They are committed to reformation, for sure—but not to reforming the church under the Word of God but rather to reforming the church so that it doesn’t morally look anything like the church revealed in Scripture and in the history of orthodox Christianity. They may be "gospel-centered," but it is a distorted gospel [which the Apostle Paul would call “another gospel" (Galatians 1:6–9)]. Jesus didn't come to affirm moral perversion but to liberate people enslaved to it and the underlying lusts of the flesh. This conference will not be "Bible-based” except in the sense that Peter speaks of in 2 Peter 3:14–16—twisting Scripture (particularly the Apostle Paul’s writings) to justify the gross immorality that Scripture condemns and the gross immorality out of which the gospel of the grace of God in Jesus Christ can deliver a person (1 Corinthians 6:9–11).

One keynote speaker, Dr. David Gushee, is an influential ethics professor. In addition, he is a global warming alarmist and the principal drafter of the "Evangelical Climate Initiative,” which was launched with a $475,000 grant from population control-advocating Hewlett Foundation and presents its alarmist view as the dominant evangelical position. The Cornwall Alliance has thoroughly refuted its arguments from science and economics point by point in “A Call to Truth, Prudence, and Protection of the Poor: An Evangelical Response to Global Warming.”

Also keynoting at the November conference is Matthew Vines, who launched The Reformation Project in 2013 and published a book in 2014 presenting what he claims is the biblical case for same-sex relationships. Since he professes to be an evangelical, he has become a darling of the secular media. Ken Ham and Steve Golden showed how unbiblical his arguments are in this article and this article back in April and May 2014. See also God and the Gay Christian?: A Response to Matthew Vines, edited by Albert Mohler and several other professors at Southern Baptist Theological Seminary.

Another speaker will be V. Gene Robinson, the first openly practicing homosexual bishop in the Episcopal Church, who retired in 2013 and speaks and lectures for a think tank in Washington, DC, promoting LGBT lifestyles particularly by trying like many others to link “gay rights” with civil rights. Dr. Charles Ware, an African American president of a multi-ethnic Bible college in Indianapolis, refutes that line of reasoning here in the light of Scripture.

The LGBT assault on the church is accelerating and Bible-believing Christian leaders and lay people must not remain silent on what the Bible clearly teaches about gender and sexual passions and behavior. We must be prepared to lovingly, graciously, but firmly hold to biblical truth and proclaim the gospel so that people can be set free from these sexual perversions (just like other sins listed in Romans 1:18–32) that are so damaging to individuals and society.

On a related matter, Southern Baptist Theological Seminary president Dr. Albert Mohler’s podcast on October 1, 2014, discusses the insanity of a new law in California intending to deal with massive heterosexual immorality on America’s secular college campuses.  See item two beginning at 3:08 minutes. I encourage you to listen to it.

God help us to be faithful to His holy Word and the gospel of our Lord Jesus Christ, come what may in the days ahead.

Previous Article Millard Erickson—Failing to Do His Homework on Creation Next Article Is the Debate Really Over?

Email me with new blog posts by Terry Mortenson Blog: