Living things can be classified into nested categories, like mammals and vertebrates. Textbooks call these hierarchical categories evidence for evolution. To see if that’s true, let’s think biblically and critically about evolutionary “family trees.”

Ever notice how a nifty diagram can make a message seem that much more persuasive? Yet sometimes, diagrams’ clearly drawn lines can conceal much blurrier lines between fact and speculation. And textbook images of evolutionary “family trees” are no exception.

Also called phylogenies, these branching diagrams show hypotheses about which organisms descended from which ancestors, based on living things’ similarities. As Part 3 of this series explained, similarities which are thought to be inherited from the same ancestor are called homologies. These include many of the similarities biologists use to classify organisms, whether backbones in vertebrates, four limbs on tetrapods, or milk production in mammals. Such classifications often create nested hierarchies, which presumably reflect ancestor-descendant relationships on phylogenies. 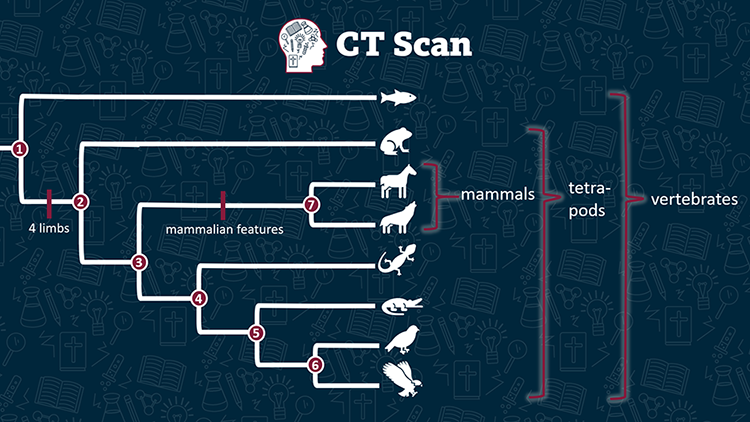 For instance, Figure 1 shows a phylogeny of some vertebrates. The points marked with numbers are called nodes, and each node represents the common ancestor of the organisms branching from it. Nodes near the base of the tree supposedly represent the oldest ancestors. Because of their similarities, animals presumed to be the closest relatives are shown sharing the most recent common ancestors. For instance, dogs and horses supposedly inherited the defining features of mammals from common ancestor #7, while dogs, horses, and frogs inherited the signature four limbs of tetrapods from ancestor #2.

Textbooks present such hierarchies as great evidence for evolution. According to my first-year biology text, “this nested pattern is exactly what we would expect to result from descent with modification from a common ancestor.”1 My third-year evolution textbook concurred, “A historical process of branching and divergence will yield objects that can be hierarchically ordered, but few other processes will do so.”2

Is that true? Let’s think about it, using Critical Thinking Check 6, Check the Interpretations.

First, when we see a phylogeny showing nested hierarchies, what parts of the diagram are facts we can observe in the present? The facts are the living things or fossils mapped on to the tree and the similarities or differences we can see between them.

Everything else about the diagram, including how the organisms are related and the nodes representing their presumed ancestors, is interpretation about the unobservable past. Even my evolution professor reminded us that phylogenies are hypotheses, not definite facts. As such, evolutionary family trees often change depending on what data and assumptions they involve. (Stay tuned for more about that in Part 8.)

What’s an alternative, biblical explanation for the nested categories—like mammals, tetrapods, and vertebrates—that result when we classify living things based on their similarities? As a helpful article by Harry Sanders points out, “nested hierarchies are in a zone of overlap between creation and evolution. Both creationists and evolutionists predict that there will be a certain level of continuity of life.”4

For example, creationists predict that living things will reproduce according to their kinds, which God designed with impressive genetic variation. Processes like natural selection can act on that variation, resulting in different species occupying different environments. Wolves and hyenas, for instance, have adapted to different environments, but are both members of the dog kind. We could use dog species’ similarities to produce a phylogeny of the dog kind, which would be consistent with Scripture. By mapping a phylogeny for different created kinds, biblical creation models view life as an “orchard” rather than a single evolutionary tree.

But what about similarities used for classifying different kinds of animals—like dogs and horses—into categories like mammals or tetrapods? Biblically, we can interpret such similarities as reflections of living things’ shared Creator. This Creator applied certain useful design plans—like four limbs—in multiple applications, to serve similar functions under similar constraints. In fact, like Harry Sanders points out, design often does produce nested hierarchies, even in human-made creations.5 For example, trucks are more similar to each other than to vans because they were designed for similar purposes. Both trucks and vans, meanwhile, are more similar to each other than to two-wheeled vehicles.

5. Identify the Rest of the Story

What other observable facts are consistent with this biblical explanation for nested hierarchies as opposed to an evolutionary one? For starters, mechanisms like mutation and natural selection do not add the kind of functional new genetic information required to change one kind of organism into another. So, they don’t adequately explain how novel life forms could arise on an evolutionary tree. But they can remove genetic variation to yield new species within kinds, consistent with the created “orchard” model.

Furthermore, the explanation that all life forms share the same Designer makes sense of organisms’ similarities and differences which evolution does not predict. For more on that, check out Dr. Gary Parker’s book chapter, Comparative Similarities and Homologies, or Part 3 of this blog series.

In the end, biblical critical thinking lets us draw clearer lines between fact and assumption regarding evolutionary family trees. Despite what textbooks may claim, life’s nested hierarchies do not require an evolutionary explanation. Instead, a biblical interpretation often explains the same observations even better.

For more on how to think critically about any faith-challenging message, stay tuned for future blog articles and my new video series, CT (Critical Thinking) Scan, available now on the AiG Canada YouTube channel and the AiG Canada Facebook page.