Are the Ark Encounter and Creation Museum Divisive?

The Ark Encounter and Creation Museum, the world-class Christian attractions of our Answers in Genesis ministry, were featured in a lengthy front-page article yesterday in our local newspaper, the Cincinnati Enquirer, and in its sister paper the Courier-Journal of Louisville (Kentucky’s largest newspaper). 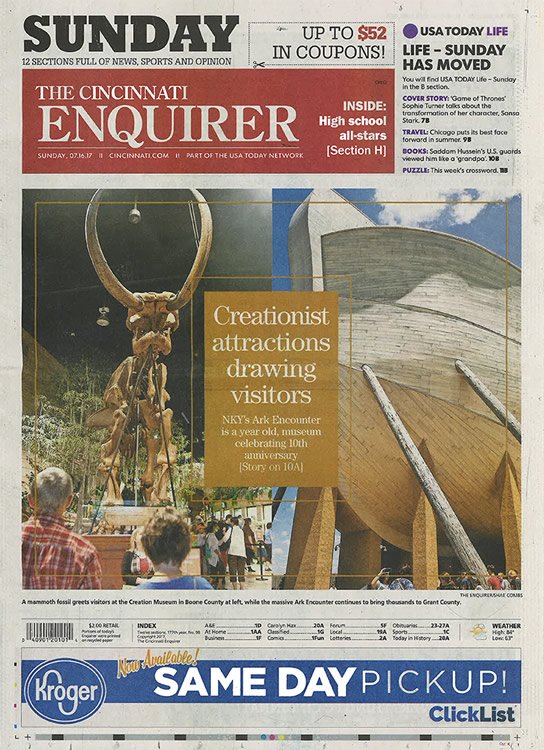 Overall, the article positively portrayed the remarkable economic impact these attractions have had on Northern Kentucky and Cincinnati as our guests pour into the region. In fact, because about 95% of our visitors live outside the region, multimillions of dollars (it will be in the billions of dollars over the coming years) are being added into the area’s economy. Also, we have about 1,000 staff in all (600 full-time staff, many part-timers, and seasonal staff who work at peak times for the attractions), and they, too, contribute to the regional economy.

In yesterday’s article, the reporter, who acknowledges that the attractions are a “powerful draw,” states, “Now, 10 years after the Creation Museum opened in western Boone County—and one year after the Ark Encounter opened—both have left a divisive but noticeable legacy in our region.”

But are the attractions really leaving a “divisive” legacy? I believe the word “divisive” was used because of the opposition we have faced by local atheists and other secularists, which make up a very small group. (As far as we know, local humanist groups don’t employ many people and have not had any major financial impact on the community.) They will sometimes host outside organizations like the anti-Christian group the Freedom From Religion Foundation to help create division, including staging protests at both the Ark and museum.

People I talk to here in Northern Kentucky, whether they are Christians or non-Christians, speak positively about AiG’s first-class attractions. Many motor coach tour companies (run as secular businesses and not ministries) have brought several thousand people to the Ark this year. One major bus tour company (which has booked hundreds of buses bound for the Ark) shared with us that its guests rate the Ark and museum extremely high.

The minority of vocal opponents receive abundant media coverage even though they don’t reflect the views of the overwhelming majority of people.

As often happens with the media, a small but vocal group of opponents will receive abundant media coverage even though they don’t reflect the views of the overwhelming majority of people. The Enquirer article gave a lot of space to the group that organized an Ark protest earlier this month, yet only 75 people turned out (that was after trying to recruit people to come here from around the country); meanwhile, we welcomed 7,200 guests to the Ark that day! In fact, small groups of atheists have been protesting AiG ever since we moved to the region in 1994 and began very soon to look for land for the Creation Museum. They continue to oppose AiG and, in the process, spout outright lies, misrepresentations, ad hominem arguments, and blasphemous attacks on our God and Christianity, as they attempt to stir up trouble against AiG’s very successful attractions. At the Ark protest nine days ago, one of the leaders actually got up on a stage and said that the city of Williamstown had given AiG a $62-million-dollar loan to build the Ark (and he repeated the lie later on his blog)!1 Sadly, people who live in and around Williamstown have heard so many lies from the atheists that we have to spend time (e.g., write guest columns in regional papers) rebutting the critics and trying to keep the community supportive of our attractions.

So the “division” the article refers to has actually been created by those who continually oppose us in a noisy and dishonest way. The division reflects the line drawn by a minority of secularists who vehemently attack the Judeo-Christian ethic (which still represents the view of the population’s majority) in the culture.

Our own research and some indicators suggest that around 30% of those who visit the Ark Encounter do not share the same views we do at Answers in Genesis concerning God’s Word, the gospel, and the Book of Genesis. But when I’ve talked to such people, they often tell me how professional the attraction is, and that they also appreciate the fact we don’t hide our Christian message but present it in a way that allows them to be challenged in their thinking yet not be put off by it. In fact, many of these guests have told me how much they appreciate hearing the challenging information, much of which they have never thought about before.

Will the Ark and Creation Museum continue to be divisive? Well, atheist groups like the Freedom From Religion Foundation and their small staff will probably not stop their bullying. Their goal is to remove every Christian symbol or reference to the Christian message they can from the public arena. So, yes, there will always be division when it comes to the biblical worldview versus the secular worldview.

Yes, there will always be division when it comes to the biblical worldview versus the secular worldview.

At the same time, however, and as the Enquirer article confirms, our professional, world-class, Christian attractions are greatly impacting the local economy and are continuing to draw millions of people from around the world to Northern Kentucky. By the way, 8,000 visitors toured the Ark on Saturday, and 3,000 walked through the Creation Museum.

We are thrilled to be located in this region and are grateful for the level of support we have received from the overwhelming majority of people and churches in the community, as well as from hotel proprietors, restaurant owners, and others whose businesses have been greatly helped by the Ark and museum.

Again, I encourage you to read “Creationist Parks Still a Potent Draw for Visitors and Controversy,” the front-page article in the Cincinnati Enquirer (and Courier-Journal).