My brother Stephen recently had the opportunity to challenge atheists at their booth at the Kentucky State Fair. Here is the report he sent me:

My family and I went the Kentucky State Fair recently. Dave (my son) placed second in the open division for pencil drawing. We were all very excited. 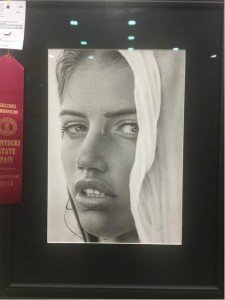 While we were there, we spent quite some time walking through all the different booths representing different companies and organizations. Among them was a booth representing the Association of Atheists, Agnostics, Humanists, and Free Thinkers. I was drawn to the booth because at the very front of the booth was a life-size model of Charles Darwin next to a petition against the Ark Encounter project. I decided to have a chat with the man and lady who were occupying the booth, and thought I would give you a quick report about the conversation.

At least for most of the conversation, I did not say that I had anything to do with the AiG ministry. I figured that might have increased an antagonistic tone right from the beginning, so I just introduced myself using my first name and asked a question.

After asking which word on their sign each of them identified with (atheist, agnostic, humanist, freethinker), I asked them why they did not believe in the biblical God. It was not unexpected to hear each of these people talking about science and the consensus of scientists, and issues that I would simply describe as humanistic rationalism. It never surprises me to hear atheist/agnostic dialogue that starts with the assumption of human autonomy as the authority for reason, and a commitment to uniformitarianism.

In much of our discussion, which was very amicable, we were able to really discuss the whole matter of assumptions. It is always very liberating to be able to immediately put forward that my starting assumption is that the Bible is true and that God has revealed Himself to us in His Word. My friends in the booth were initially reluctant to admit that they had starting assumptions about the past, although one of them did freely admit it later in the conversation. We discussed that they had assumptions such as life coming from non-life that could not be proven in the present. They did recognize that there were gaps in what they could know, in respect to observational science compared to what they believed about the past. One of the intriguing parts of our conversation was when we were talking about the use of the historical testimony of the Bible as it relates to science.

My friends in the booth did not want to give the biblical testimony a foot in the door, and indeed they didn't.  One of them used a rather intriguing analogy to show how they use deductive reasoning to seek out past happenings. I will try and represent it using my own words. Imagine if next to the table (in the booth) was a broken glass on the ground with water around it. If we didn't see what happened, we would look at the situation and make deductions about what happened in the past to this glass. We would likely deduce that the glass had fallen from the table and smashed on the ground. I said that this might indeed be a good guess and that I could see how somebody might come to this deduction. I then suggested that it could also be that somebody walking past just dropped the glass there and that it had nothing to do with the table, or perhaps the glass may have already been broken somewhere else and placed there with extra water being poured upon it. Of course, I suggested that the last situation would be unlikely but the fact is, if we were not there, we could not rule it out. They suspiciously agreed. I then asked what they would do if someone came to the booth later and told us that they saw somebody throw the glass of water on the ground. Would they believe that testimony? They agreed that they probably would because they didn't see it. They weren't there, but this person was. We talked some about why we would believe the testimony of that person. How would we know we could trust them? They were willing to accept that the onus would be on them to prove him wrong and they could even use observational skills to see if the evidence confirmed the testimony. I pointed out that if they did this, they would be acting in a contrary manner to how they are treating the issues concerning the origins of life and the universe. They are unwilling to accept or even see if the biblical testimony is confirmed by scientific observation of the evidence in the present. The onus is on them to prove it wrong, but they are unwilling to even consider it. They have a contradictory process.

For a while, the conversation got on to talking about the ability to do science. We discussed that we can only observe and measure things accurately because we can trust our senses and the uniformity of laws that exist in the universe. This brought up an opportunity for a classic presuppositional apologetic argument about the irrationality of expecting consistent uniform laws from random chance. God, however, has told us in His Word that He has given us all the laws that govern the universe. We can only do science because the God of the Bible has created the laws necessary for it. One of my friends in the booth objected that if God has to obey those laws, then God could not be all powerful. In agreement, I talked about the fact that God not only instituted these laws, but we have a testimony of miracles showing that God indeed works outside of these laws, showing Himself alone to be God just as we would expect. I did not expect my friends to agree with the concept of miracles, although I asked them how then they could account for major things they believe that are not observed, such as something coming from nothing, life coming from non-life, and information existing without an informer.

Apart from speaking about science and knowledge, I asked what other areas have caused them to protest against God. Often sadness in someone's life in respect to losing a friend or seeing suffering is also behind motives. The issues of death, suffering, and evil were again evident in this discussion. While time did not allow me to deal as in-depth with these issues, only the biblical worldview can account for such, and in fact there is only an ultimate basis for understanding good, evil, and morality in the Christian worldview. I directed them to our website.

Bottom line, every time I have these conversations, I am convinced that we need to do more to help equip the church to give answers about understanding the nature of science, reason, and morality, and defending the true history in the Word of God. We need to be able to answer these questions about death and suffering and other general questions about the biological, geological, astronomical, anthropological, and archeological history in the Bible.

As I was having the discussion with these people, I was constantly reminding myself that it will never be my arguments that are going to help these people, but I must just answer questions and discuss to the best of my ability to allow me to share the most important message I can share. I was continually moving toward sharing the gospel. I am thankful that I was indeed able to testify that the true history in God's Word points to the history of human sin, God's judgment, and the true testimony that Jesus Christ came and lived a sinless life, died on the Cross, and rose again on the third day. If we come to Him in repentance and faith, we can be saved from the judgment we all deserve. I pleaded with them to think about their position before God and His gospel.

As I was leaving, I pointed to their petition against the Ark Encounter. 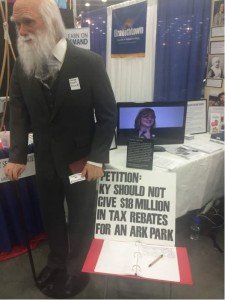 I told them I hoped that people, particularly Christians, have been friendly to them as they engage in their right to free speech. I told them that I worked for the organization that is building the Ark. Well, one of them actually suspected it. At the end of the day, I enjoyed our conversation. My heart goes out to these two people who are living in hatred of the God that they will not admit to be real. They only know a relationship with God based on His judgment, but my prayer for them is that they will come to know His mercy and grace.

I realized something after our discussion. I am not really surprised at the contradictions coming from the people I talked to. They accept the use of testimony except when that testimony is the Bible. They say that Christians have a God of the gaps but are unable to explain their own gaps, apart from claiming that it is a mystery yet to be solved. Mystery is their “god of the gaps.” They are happy to use assumptions of uniformitarianism but accuse Christians of working on assumptions. Is it any surprise that they would stand for freedom of speech and then create a petition that says the Ark Encounter should not receive the state government tourism incentive because its message is one they don't agree with?

I didn't leave with them bowing down and professing Christ. I didn't expect to. But I do trust the power of the gospel and the Holy Spirit. And, despite their aggressive campaigning against our ministry, we exist to equip Christians to reach out with the gospel to these people and everybody else in the world. They don't want to see us in Kentucky, but we do want to see them in heaven. Thanks for stopping by and thanks for praying,