I recently responded to Michael Gungor’s (member of the band Gungor) assertion that “NO REASONABLE PERSON takes the entire Bible completely literally” (emphasis Gungor’s). You can read the complete article on our website. Well, Gungor recently appeared on The Liturgists Podcast, where he and cohost Mike McHargue discussed Gungor’s interpretation of Genesis.

Now, Michael Gungor made some shocking claims about the historical value of the book of Genesis on his blog. But his recent statements on this podcast just show how much biblical authority he’s really given up. In the beginning of the podcast, McHargue argues that I’m requiring people to accept the infallibility of the whole Bible—which presumably includes belief in a young earth—to be saved:

For those of you who might be living under a rock and are unaware, a magazine that I’ve never heard of called World mag dug up a bunch of kind of older writings and interview from our good man Mikey G [Michael Gungor], and were really shocked that he didn’t believe the earth was formed in six literal days. And this has emerged into sort of a massive online freak out, where conservative Christians and progressive Christians have kind of lined up Civil War-style and are firing musket at each other. And that’s actually escalated to the point where none other than Bill Nye’s nemesis Ken Ham has written a post on Answers in Genesis really kind of taking apart Michael’s position and effectively equating belief in Christ and participation in the Christian tradition with acceptance of the modern incarnation of biblical infallibility. [emphasis mine]

Salvation is based on faith alone in Christ alone—nothing more. If McHargue wants to make it seem as if I believe that people have to accept biblical creation to have faith in Christ, he’s making a totally false claim. I have never said that someone must believe in a young earth to be saved. In fact, here’s an article (of many I can cite) from our website where I specifically deny that claim. Of course, the Bible is the inerrant Word of God—and that’s not a new concept! And belief in the inspiration and infallibility of the Bible is historic Christian orthodoxy (for the last 2,000 years).  When believers like Gungor refuse to take God at His Word in Genesis, that’s not a salvation issue—but it is an authority issue, and an important one.

In the podcast, Gungor says he once believed in biblical creation but eventually came to accept theistic evolution. So, when did Gungor give up scriptural authority in Genesis? Read for yourself:

In college, I came up against some of the science, you know, showing the age of the earth, showing evolutionary principles, and it really kind of rocked me a little bit . . . I was raised in Christian school and I learned in my Christian school textbooks how carbon dating was flawed and the scientists of the world—the more mainstream scientists—were all very biased and were trying to sway the science toward atheism because they didn’t want to believe the Bible. . . . And then when I got into college and had to cite my work for my papers, and I was trying to argue that against my professors, I kept seeing that my sources were the biased ones . . . and that created a lot of tension for me.

Eventually, after being repeatedly indoctrinated into evolutionary ideas and millions of years, Gungor gave up biblical creation. As I state in my coauthored book Already Gone, two-thirds of young people are walking away from the church before or soon after they enter college. Gungor is a sad example of this. Today, he believes that Genesis 1 is nothing more than a “poem” and therefore not literally true. He also denies the account of Noah’s Flood as literal history. Actually, there is strong biblical evidence that Genesis 1, like the rest of Genesis, is written as historical narrative. He even says that Jesus was probably just wrong when He treated those accounts as true! But then Gungor would have to also declare that the Apostle Paul and all the other biblical writers who refer to Genesis 1–11 were wrong, too, because they all clearly took those early chapters as literal, accurate history.

Sadly, it appears that Gungor has adopted the idea that holding to the inerrancy of Scripture is treating the Bible as an idol. You see, in response to a recent Facebook comment about my views, Gungor wrote, “There is a trend in modern society, no more than a trend . . . a religion, an idolatry that elevates Scripture above Jesus.” 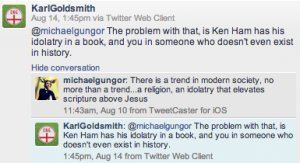 Now, Jesus Christ Himself said the Scriptures testify about Him. And He quoted the Old Testament Scriptures while also teaching truths recorded in the Gospel accounts. Our God doesn’t lie and He doesn’t change—so how could it be idolatry to take the Bible at its word? Such arguments are just rationalizations from someone who doesn’t want to believe what the Bible clearly says.

Cohost McHargue asked Gungor what he thinks of the claim that Jesus spoke of Moses’s writings as though they were historical fact, so that to reject any of Moses’s words as allegorical is to reject the divinity of Christ. Gungor’s response is alarming:

I think you’re making a lot of assumptions based in a perspective that was handed to you from our culture, and the way we think in the modern world is very different than how people thought in the pre-modern world. To just see a few words that somebody said, that Jesus said, about Noah, and to assume that you can get into Jesus’s mind and know exactly how he thought about the whole situation, and how He considered history versus myth versus whatever—how do you know? And even if He was wrong, even if He did believe that Noah was a historical person, or Adam was a historical person, and ended up being wrong, I don’t understand how that even would deny the divinity of Christ. . . . The point is it wouldn’t freak me out if He was wrong about it, in His human side. But I still don’t see the issue. If Noah and Adam were mythical ideas, the point of what Jesus was saying still applies to me. . . . It has very little do, in my perspective, with Jesus trying to lay out a history of world to a historical-minded people. . . . Even if Jesus knew that Noah and Adam were mythical, but knew He was talking to people who thought they were real, that’s another possibility. [emphases mine]

So not only does Michael Gungor deny the historical accuracy of the creation and Flood accounts—but he believes Jesus Christ was probably wrong, too! Or worse yet, that Christ might have just lied to the Jews about it. This is a sad place for a professing Christian to be in (see the article Was Jesus Wrong? Peter Enns Says, “Yes”). Michael Gungor has an influence on the youth of this generation and will lead them astray with such views. I urge you to pray for him, that he’ll accept our offer to visit the Creation Museum and that he’ll come to accept the authority of God’s Word in every area—including the history in Genesis!

Check out Dr. Terry Mortenson’s DVD Biblical Creation: Strengthening Your Grip where he shows that Genesis 1–11 is history and that Jesus and the Apostles believed and knew the difference between truth and myth. And Coming to Grips with Genesis provides an in-depth defense of the literal, historical truth of Genesis 1–11.