Back to Times Square with Another Powerful Billboard!

In today’s main article on our website, I write about the spectacular new video billboard we have just placed in Times Square in New York City earlier this morning. This animated video—wonderfully produced for us by our advertising agency JDA—has a Christmas theme and it follows the large board we placed in Times Square in October. (We had similar billboard messages in San Francisco and Los Angeles in October and early November). It’s a part of our ongoing campaign to reach out to atheists and agnostics with the gospel.

This phenomenal new video board, which will be in Times Square through Christmas Day, is even larger than the last one. And I think it has an even more effective message that will draw even more people to our website. (Our web traffic for October and early November was incredible.) Another reason I think the new one will be more effective—other than the fact that it fits with the upcoming Christmas season—is the location. It’s an even better spot than last time. Because of the overwhelming response of the last billboard, many AiG supporters specially donated the funds to put up this board, and we are grateful to them. And with a larger board, we can now add a verse of Scripture.

Here is the animation of the board that just went up today:

Here are a couple photos of the actual billboard in Times Square: 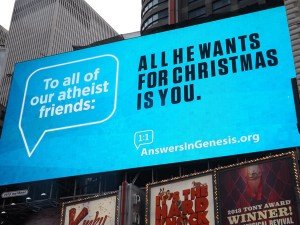 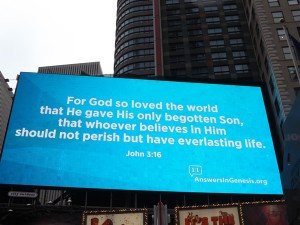 An AiG supporter in New York City, Joy, was thrilled to see our previous video board in Times Square. She was kind enough to send photos of it to us (she also took the two photos above of the new Christmas billboard): 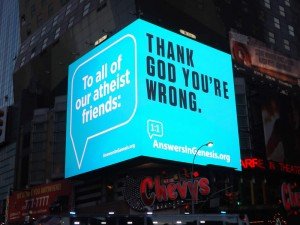 I mentioned Joy in our lead article today. I wanted to let you know what else she shared with us last month about the billboard campaign and about the entire AiG ministry: “I live in New York City. Last night I was downtown and thought I would go by and see the AiG billboard. We’re praying very much for this whole campaign, and that God will be glorified.” She added that the digital board was “very well done. Thank God you are willing to take a stand.”

Later she added how AiG’s resources have blessed their church and its outreaches:

We love AiG and the Creation Museum. We have used your materials for some time in ministry, but about a year ago we were able to visit the museum. We subscribe to the Answers magazine, and our son (11) reads it cover to cover. We started using your science curriculum this year in our homeschool, and love it.

My personal “favorite” ministry [of our church] is a children’s ministry on Thursday afternoons. We have an afterschool Art & Bible class—an hour and half of painting/drawing instruction and half hour of Bible class. The Lord has given us 15–20 mostly Asian children from all religious backgrounds—Buddhist, Muslim, Hindu, etc.

I have been using AiG material to help explain the gospel—beginning with the existence of God and Creation—to people who have never heard. I just started teaching through the 7 C’s. God is blessing so much!

One little Buddhist girl (Japanese) was saved recently, and her mother and I are starting a weekly Bible study. Her father is supportive as well, and the family has come to Sunday services several times. I could tell you so many stories. For most, we see the blinders falling off one by one. If you came to our class, you would be able to hear these Buddhist and Hindu (public school!) children explain how the first and second laws of thermodynamics . . . [help confirm] the existence of a Creator and disprove evolution.

– Joy G., New York City Let’s hope that believers like Joy will be emboldened in sharing their faith as we continue our Times Square outreach, and that atheists and others will visit our website (it is prominently displayed on the board) and consider the verse from John 3:16.

For the next few weeks, when you visit the Answers in Genesis homepage, you will be greeted by a powerful video message—specifically addresses to our atheist friends—that is currently playing on a prominent billboard in Times Square. Along with this video is a “Get Answers” button that links to our main article “What Is Christmas?”

By the way, as our new board goes up today in New York City, an atheist movie is having its premier in the city this Friday. The Unbelievers costars the well-known atheists Richard Dawkins of England and Lawrence Krauss of Arizona State University. Yes, the atheists are more aggressive than ever in proclaiming their worldview. So Christians need to engage them more than ever in the culture.