In an effort to continue reaching out to unbelievers, Answers in Genesis has put up another video board in the heart of Times Square—this time with a Christmas theme.

Last month, Answers in Genesis launched a very successful billboard campaign in California (Hollywood, Los Angeles, and the San Francisco Bay area) and Times Square in New York City. AiG wanted to reach out to people in secularized areas of the country and engage them in a “friendly” way (as a New York Times headline stated)1 and point them to our website. The result of this campaign was a huge increase in web visitors to our AiG site and a lot of media coverage—and we hope many people considered more carefully the fact of God’s existence. The billboards read, “To all of our atheist friends: Thank God you’re wrong,” which demonstrated our gratefulness that there is a God who offers the free gift of salvation to anyone who will believe.2

The Gospel at Christmas

In an effort to continue reaching out to unbelievers, Answers in Genesis has put up another video board in the heart of Times Square—this time with a Christmas theme. The new billboard went live at 6 AM today and will run through Christmas day.

What’s the message this time in busy Times Square? As always, our heart is to share the gospel with unbelievers because salvation is a gift that lasts forever. In light of that mission, the new billboard shares a message of hope with atheists and others, reading, “To all our atheist friends: All He wants for Christmas is you.” Following that we quote John 3:16. The video below is what people at Times Square can see now through Christmas day: 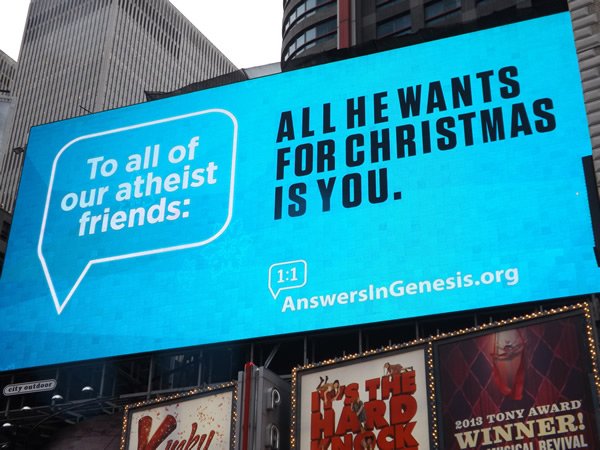 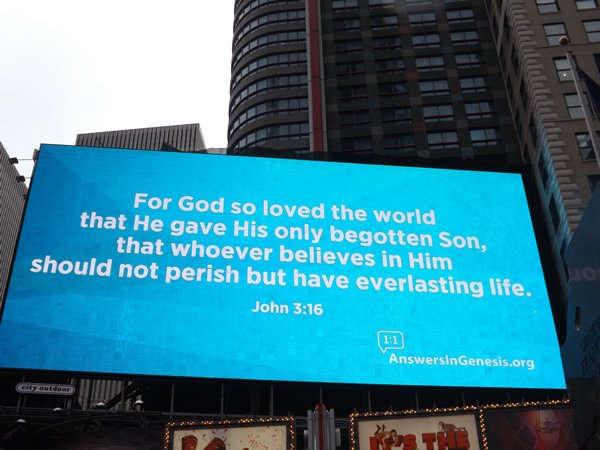 Our advertising agency JDA indicated that this new billboard will be viewed by about 45,000,000 people over the next few weeks—more than the last board. What’s even better is that we were able to obtain this prime billboard location at an excellent price, and a number of AiG supporters were so encouraged by the last billboard that they provided special financial support for this new billboard.

Why Run Another Billboard?

Of course, it’s getting close to Christmas, and our new video billboard gives AiG an opportunity to evangelize millions of people as we thank God about the fact that Christ came to earth and we can explain why. But there is another reason to be in Times Square once again, and it relates to an anti-Christmas billboard that appeared last December in Times Square (and similar mocking boards appeared around the country during Christmas 2012). It was just another manifestation of the aggressiveness of atheists in our culture.

Here was the blasphemous atheist billboard that was posted last Christmas in Times Square: 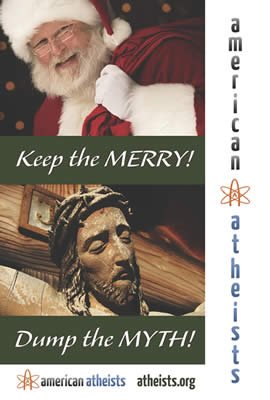 With Christmas in their sights for this year, the organization Freedom from Religion Foundation is planning on posting over 50 billboards around Sacramento, California, urging people to place their belief in mankind over God.3 They want people to follow them in their footsteps and reject the real meaning for Christmas. Here is just one of their billboards they will be posting: 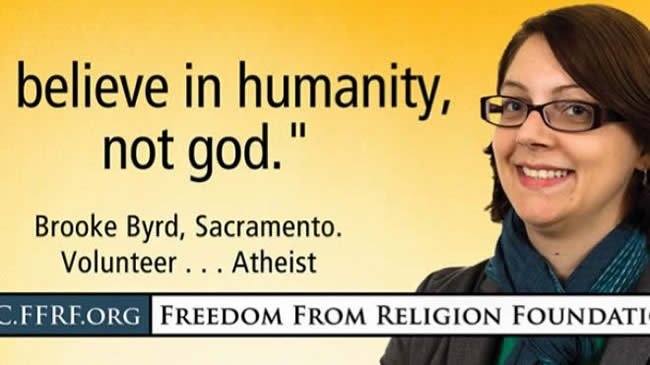 Over the years, I have observed that more and more atheists have become zealots for their belief system, which is their religion. Yes, atheism is a worldview that, along with its sister belief of evolution, claims to explain everything around us. The “new atheists,” as they are also called, are aggressively going after you and your children. Ultimately, they want to convert you away from your faith to theirs! And over the last few years, one of the atheists’ strategies for spreading their message has been through billboards. Because of the public nature of billboards, numerous people are guaranteed to be exposed to the godless message of atheism.

In the 1960s, atheists got prayer removed from government schools. In more recent decades, they have gotten Nativity scenes taken down from public places, Ten Commandments displays removed, creation pulled out of school curricula, and so on.

Why are the atheists gaining ground? What’s happened in the culture to allow this? As I have been saying for years, there’s been a change in this culture—at a foundational level. Generations have been indoctrinated by the secular education system, museums, and media to build their thinking on human reason, not the Word of God. And at the foundation of this shift has been the issue of creation and evolution.

As the authority of God’s Word and its absolutes have been undermined in America, including inside much of the church, the ideas of secular humanism and its anti-Christian message have gained prominence.

The only reason atheists would even bother to become evangelists for their faith is if they are engaged in a spiritual battle. Otherwise they wouldn’t care. They know in their hearts there is a God, and they are deliberately suppressing that, as the Scripture so clearly tells us in Romans 1.

“Thank God You Are Willing to Take a Stand.”

We were tremendously blessed to hear from Christians who were greatly encouraged in New York and California to see our previous billboards. An AiG supporter in New York City, Joy, was thrilled to see our video board in Times Square. Last month, she was kind enough to travel to Times Square and take photos of our first board, and sent them to us (she also took the two photos above of the new Christmas billboard). One of them is below: 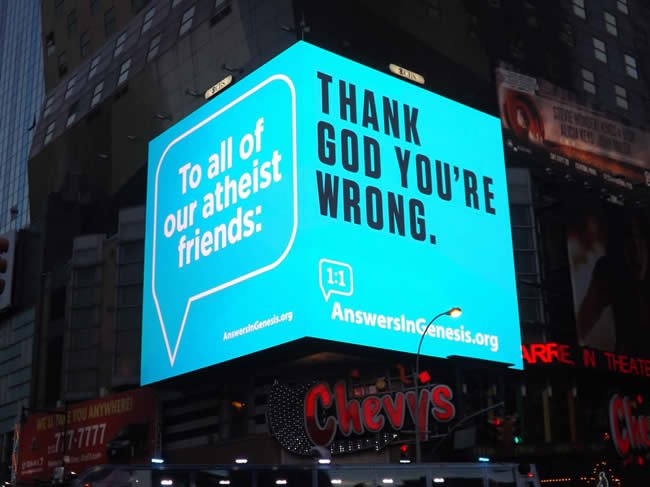 Joy wrote to us at the time: “I live in New York City. Last night I was downtown and thought I would go by and see the AiG billboard. We’re praying very much for this whole campaign, and that God will be glorified.” She added that the digital board was “very well done. Thank God you are willing to take a stand.”

We certainly need to pray for atheists, because they are heading for an eternity separated from God. Indeed, God will give them what they want: separation from Him for eternity. Pray along with me that this new billboard will point atheists to the gospel message and that they will repent before a holy God and receive the free gift of salvation. The Bible teaches, “If you confess with your mouth the Lord Jesus and believe in your heart that God has raised Him from the dead, you will be saved” (Romans 10:9).

For the next few weeks, when you visit the Answers in Genesis homepage, you will be greeted by a powerful video message—specifically addressed to our atheist friends—that is currently playing on a prominent billboard in Times Square. Along with this video is a “Get Answers” button that links to our main article “What Is Christmas?”